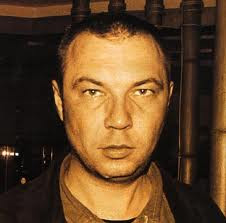 Viktor Pelevin is a literary and cultural phenomenon. In a devastated country, he has readers. They lay down hard-earned, devasted rubles to buy his books: an incredible 200,000 copies of his last novel sold in Russia, copies no doubt handed confidentially around, in the words of one critic, "as in days of yore." Pelevin writes a lax, conversational prose, yet he has readers, indulges in lengthy, reiterative digressions on Buddhist philosophy, yet has readers—looks, with the black leather jacket and perpetual sunglasses, more like a Russian goon than a Moscow intellectual, yet he has readers. Quotes Leonard Cohen, has readers. Lives, for the love of God, with his mother, yet he has hundreds of thousands of readers. It is like nothing we have ever seen.

The appearance in English translation of the book that permanently established Pelevin will do little to explain this state of affairs. Original published in 1996—in the venerable thick journal, Znamya—as Chapaev i Pustota, or "Chapaev and Nothingness," it is his longest and most annoying novel. It consists of two interwined narratives: one is set in 1919, during the Civing War; and another in 1996, in a mental hospital outside Moscow. The bulk of the story takes place in 1919, or "1919," and resembles one of those pleasant postmodern exercises in which a bizarre inner life is projected onto an iconic historical figure—in this case the Red Army commander Vasily Chapaev, immortalized in a 1934 film about his adeventures on the Eastern front during the Civil War. In the film, Chapaev is a simple Cossack with a talent for violence, flanked by the even simpler, handsomer young Pyotr (Petka, with a soft t), and a brave machine-gunner named Anna. In Pelevin's version, Chapae is a Buddhist sage and Petka, the novel's narrator, a leading Decadent poet—all of which is quite clever, if you've seen the movie.

So much, in fact, does the book rely on the movie's disjointed scenes that it should probably be distributed, like gentleman's magazines, in a sturdy plastic wrapping, with a copy of the video inside. The package should also contain, while we're at it, a tiny little Russian person, because the other crucial source for Pelevin is a famous string of Soviet jokes starring Chapaev and Petka. Here's one that appears in the novel both as a joke and the basis for a scene: Chapaev and Petka are having a few drinks when Petka looks out the window. "The Whites are coming!" he cries. "Have another drink," says Chapaev. They drink. This goes on for some time, until Petka looks out the window, and Chapaev asks, "Can you see them?" "I'm not sure, they're blurry." "Can you see me?" "Not really." "Good, because I can't see you, either," says Chapaev. "We've camouflaged ourselves." By the time Pelevin gets to the myth, it's been drained of political significance. So this is in some sense the reconstruction of a thoroughly deconstructed myth, to return meaning to it—is, in other words, some very ironic stuff, and should not be tried at home.

But the preceding Chapaev joke also summarzies quite neatly the philosophic content of this novel, as it expresses the small child's conviction that if he covers his eyes, no one will be able to see him. This is the most natural expression of solipsism, and solipsism is Pelevin's great topic as a philosophical writers. Here, the emphasis on solipsism and its Buddhist underpinnings is grating. Flaubert's complaint about Tolstoy—"il se répète et il philosophise"—is apct. And the Count, at least, least, was in earnest, prepared to sink his great masterpiece in order to have his say on the Napoleonic invasion, while Pelevin, though he devotes great swarths of space to his philosphy, consistently frames it in narratival quotation markes: it is pronounced whilel guns are firing or houses burning or even, at one point, in a wet dream, during which Petka confides to Anna:

This, too, is an adequate précis of Pelevin's method in Buddha's Little Finger—a series of hints and a great deal of incomprehensible conversation (in no way improved, it might here quietly be noted, by a translation that is plodding and literal to the point of opacity). The book was scornfully received in part, one feels, because it was an attack on the integrity of Russia's borders. If, as Pelevin suggested, the Russian novel is nothing more than a loosely connected series of skits held togther by the author's arbitrary whims, what is Russian but a loose confederation of states held together by the brute force of an impetuous autocrat?

Though a great deal less than in his other books—and Omon-Ra, I think, remains his best—there are exceptions to this mode that go some way toward salvaging Little Finger for readers who aren't particularly interested in how clever Pelevin's adaptation of Chapaev is, or in quite this much Buddhism. The only scene in which the philosophical dialogue actually holds its own weight consists of three "businessmen" sitting in the woods, 'schrooming, and discussing Buddhism in the metaphors of the new Russian gangsterism, complete with references to the Godfather trilogy. (The drug-induced conversation is a favorite Pelevin device, one clearly indebted to this reviewer's high school oeuvre.) He also delivers the occasional one-liner—like this quotable gem, from his leatest, as yet untranslated novel, Generation P: "Was it really worth converting Russia from an Evil Empire into an evil banana republic—that imports its bananas from Finland?"

Pelevin is best when he inclines his satirical ear thus to the contemporary Russian scene, for he is, oddly, one of the few writers tapping that vein. Or perhaps it is not so odd. For as aesthetic projeacts go, the novel is a long one, and the novelist must at least be certain the reality he sets out to describe will still be recognizably there after he's expended three years and 300 pages on it. The blinding pace of change in Russia over the past 10 years—of manner, morals, and language—must make any such project seem rather dubious. In this sense, a novelist living under a Soviet regime destined to last a thousand years was better off: he at least had the consolation that his book, no matter how timid or processed, would not accidentally light, in the six months between completion and publication, on an entirely different historical reality.

The post-Communist writer has no such guaranteee, and finds himself in the position of a Russian youth drawn to violent crime because anything else seems a silly investment in a future that may never arrive. The high-conceptualist Vladimir Sorokin, for example, has announced that "life is now more vivid even than literature." and that he has "lost interest" in writing novels. Other writers seek their material in the Soviet past. It is against this backdrop that Pelevin's otherwise rather esoteric form of engagement must be understood; because, as one of his characters puts it, "What can happen in a toilet?" Pelevin's solution to the self's annihilation in the vacuum of historical flux is an omnipotent solipsism. The conceit that runs through much of his fiction is that the world exists only as a projection of his narrator's consciousness—and this is a consolation, of sorts.

Or, perhaps more accurrately, this is a conceit that pretends to run through his fiction, for we sense, as readers, the palpability of the reality he would have us dismiss. In Little Finger, entire convoluted layers of proof are marshaled to convince us that this is all a dream, that the real action is taking place in 1919, and that the '90s, in which Petka is confined to a psychiatric ward, are merely a nightmare. It's confusing, yes—but when Petka is finally released from the psychiatric ward (for an excess, it appears, of madness), the authenticity of what he encounters is unmistakable; the narrative tone shifts from cool irony to a sort of shivering innocence. He finds the large, barren courtyards "unutterably depressing," and, though he recognizes many of the city's buildings, Petka does not know how to behave. When this hapless character, alone in the chill Moscow night, sees Chapaev's armored vehicle, "exactly where I had expected to see it, and the cap of snow on its turret...just as it should have been," the poignant reality of contemporary Russia comes crashing through the text's hokey trappings. It is a remarkable ending to a very messy book.

It could certainly be said that Pelevin's popularity, too, is a dream, or a least a speculative bubble, that post-Soviet Russia needed a major writer, and it called him "Pelevin." The unnecessary bevy of French philosophers invoked by his critical boosters—and Pelevin has quite a few more than he would have us believe—to prove his Seriousness tends to support this view. But the other fact to consider, so often forgotten by writers and artists and critics, is that we, as readers, need so little to makes us happy. We need ony to recognize, for a moment or tow, the world in which we live; we need only see it transformed, for a moment or two, in the mirror of art. It is such a pittance to ask for, and yet it is so seldom given us—and Pelevin, for all his digressions, sometimes manaages, humorously and with a good bit of terror, that flicker of recognition. Which is why, in a time of troubles, he is read. [Keith Gessen, The Boston Book Review]

Posted by Douglas Messerli at 9:08 AM