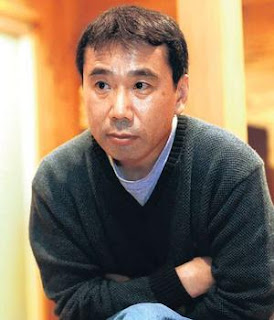 In conversation in The New Yorker's Ian Buruma a couple of years ago, Haruki Murakmi remarked that "Revelation is not really a Japanese concept." To some of his readers, especially his more recent Western ones, this statement might seem a bit odd. For beyond the near devout craze with which Murakami's novels present the props of Americana—the shopping malls, the curiously deadpan ad campaigns, the hard-boiled everymen eating doughnuts in shaded corners—his writing has always sprung secrets open. In The Wind-Up Bird Chronicle (1994), arguably Murakami's most overtly political work of fiction so far, this penchant for the revelatory is exemplified in the agonized wanderings of Toru Okada. Looking for his missing wife's missing cat, Toru Okada comes—through a series of encounters by turns arcane, by turns frenzied—to the sudden understanding of the essential capacity for violence that lies at the heart of Japanese society and culture. In Dance Dance Dance (1988), Murakami's protagonist is once again on the cusp of enlightenment and discovery, this time by way of a search for a missing girlfriend. The novel's young hero is aware of his liminal position: his palpable sense of the force of disclosure can be seen in his decision to play chaperone to a teenage psychic. This propensity for quasi-epiphanic episodes is also present in Hear the Wind Song (1978), the book that started Murakami's meteoric rise to literary superstardom when it won Japan's highly coveted Gunzo prize. Not able to fully digest the suicide of a former girlfriend, the book's main character offers as an aside, "Sometimes I feel myself getting older. And that's the terrifying truth."

Revelation may not, as Murakami rather playfully suggests, be a Japanese concept; however, as a novelistic device it is certainly not something he has shied away from either. But with the publication of Norwegian Wood (judiciously translated by Jay Rubin), a tale ostensibly about the "fumbling love affairs of a young student," Murakami has pushed his readers off center a bit. In many regards, this is simply because the story of Watanabe is the story of many who have gone some way towards experiencing love. Growing up in an impossibly suburban enclave on the outskirts of Kobe, Watanabe goes through all the isolated acts that characterize the typical late-adolescent experience. He reluctantly plays third wheel to two of his friends, Kizuki and Naoko, during their burgeoning love affair; awkwardly agrees to go along on pre-arranged dates with pretty girls who are difficult to talk to; and teeters along in his last year of high school by day while voraciously consuming Truman Capote, John Updike, Scott Fitzgerald, and Raymond Chandler by night. His life is exemplary, in other words, only insofar as it is completely ordinary. All this changes, however, when Kizuki suddenly commits suicide. It is an event that neither Watanabe nor Naoko, the bereaved girlfriend, is prepared for. Predictably, they withdraw to their respective lots: Watanabe to a "fishy" dormitory in the middle of Tokyo, where he now attends university; Naoko to an alternative "institution" deep in the Kyoto countryside. What ensues is not so much the start of a romantic relationship between Watanabe and Naoko as Watanabe's unrelenting attempt to resuscitate Naoko from the Orphic realm in which she now travels. It is an attempt that proves, ultimately, unsuccessful.

However much the specific narrative details may change from book to book, Marakami's hallmark—the twisting, almost Chandler-esque dénouement—is something his readers have come to expect. Murakami doesn't deploy that convoluted structure in Norwegian Wood. Gone too are the usual supernatural elements, those metaphysical tricks that so happily make a mockery of time and space. From a purely literary standpoint, Norwegian Wood is more conservative, more mindful of the parameters to which the love story has traditionally been bound. Murakami has not lapsed into narrative conventions, but rediscovered their capacity for revelation and the expression of feeling.

As with Murakami's other characters, the singularly noteworth characteristic of Watanabe in Norwegian Wood is the tone of his voice. Not quite detached, not quire ironic either, Watanabe narrates in a manner and with a disposition that is at times Albert Camus' Meursault, or other times Raymond Chandler's Marlowe. Meursault begins his moral descent (one that ends in a cold-blooded homicide) in The Stranger with the lines, "Mother died today. Or yesterday, maybe. I don't know." Watanabe speaks of his departed friend's suicide in equally lackluster terms: "That night he died in the garage. He attached a rubber hose to the exhaust pipe of his N360, got inside, sealed the windows with tape, and started the engine. I don't know how long it took him to die." Similarly, while Marlowe in Farewell, My Lovely can refer to Los Angeles as a city with all the personality of a paper cup, Watanabe is apt to comment on the supremely alienating effect of his surroundings as follows:

When I finished trimming my nails, I made myself some coffee
and drank it at the kitchen table, German book open. Stripping
down to a T-shirt in the sun-filled kitchen, I had set about
memorizing all the forms of a grammar chart when I was struck by
an odd feeling. It seemed to me that the longest imaginable
distance separated irregular German verbs from this kitchen table.

Of course, in the scene above, hard-core Chandler aficionados might well have expected Murakami to do more with Watanabe's making coffee. It might have been some kind of calming, reflection-inducing act: an act, moreover, that Marlowe himself is wont to perform during movements of—dare we say—revelation. Whatever this case, the Watanabe/Meursault/Marlowe triumvirate is appealing for one very simple reason: these characters are exhausted by life's failure to be meaningful, by the humiliation that failure brings to them. They all feel somehow sloppy when life turns out to be incoherent.

By the time sexually curious extrovert Midori enters his life, Watanabe has had ample time to act the degenerate. Encouraged by his fellow dorm-mate, Nagasawa, Watanabe has taken to sleeping with girls he doesn't care for. Naoko's worsening mental health and eventual sexual withdrawal make this lapse seem oddly pragmatic. With Midor's affecting come redemption, albeit a vastly complicated and drawn-out one. When Naoko finally takes her own life, it is to Midori that Watanabe again and again calls out "from the dead center of this place that was no place." It is a call beautifully rendered and worth listening to. [Kim Hjelmgaard, The Boston Book Review]

Posted by Douglas Messerli at 8:01 AM