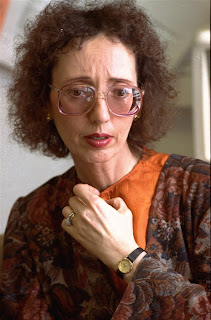 Blonde is Joyce Carol Oates's novel about Marilyn Monroe, and it is a very easy book to make fun of it that's what you want to do. Monroe's story is a soap opera that has already been set to every soundtrack imaginable, and now here comes a cerebral lady professor to pound it out on her piano.

And I do mean pound; Norma Jeane Baker's life was tragic and strange, and Oates hammers that home with a vengeance, emphasizing the actress's every moment of degradation and shame. Indeed, the book is a masochistic festival of feminine shame, filled with incidents such as the childlike Monroe being raped in the ass by a sadistic producer for the privilege of trying out for a bit part in his film (Scudda-Hoo! Scudda-Hay!), for which she auditions with "ugly brown menstrual blood" soaking through her Kotex and a "searing pain her [her] anus." Such things happen, but Oates renders this and countless other moments in a tone of ululating hysteria that is often emotionally pornographic. The ass-raping chapter is called "Hummingbird," and it juxtaposes Monroe's helpless delicacy and the grossness of the action for maximum pathos.

"Love me, don't hit me." "Don't make me into a joke...I beg you." "Could you p-promise not to...Otto, please!" The Monroe of Blonde is an ideal Sadean victim, and Oates places her in a gothic landscape built of feverish language: "The secret place between her legs had been rent and bloodied and claimed by the Dark Prince." "Never had Warren been so big." "Never would he know." "But no, never will we hear."

I repeat, you could easily make fun of Blonde and feel quite smart while doing it. You would even be right, in a prissy way. Except for one thing: The book is great. Even with all the qualities just described, it is a powerful work of art. It has the energy and locomotive force of Dickens or Hugo—authors who, if judged by today's standards, would also be deemed hysterical and melodramatic.

Oates's narrative includes three strong voices: one runs up and down on the surface of the story, nearly incoherent with horror at what it relates, yet relating it with the sill, affected phrases beginning "Never would...." Another is the voice employed by Oates the essayist—rigorous, observant, nearly cutting in its precision. The third is muscular and sensual—a stereotypically male voice. All three voices operate independently of one another, creating a rich, clashing jumble. The first one is the strongest, though, perhaps because it has been charged with insistently reminding the other, more sanguine ones that something terrible is happening. That first voice may be high-pitched and theatrical, but it is finally dignified by its genuine grief at the suffering of the woman Norma Jeane.

Blonde begins where Baker is six, in the clutches of a demented mother whose baroque cruelty toward her daughter is a casual by-product of her own self-destructiveness. The child is sent to an orphanage when her mother tries to kill her and is eventually farmed out to a rough, ignorant foster family, where she is betrayed by the mother who is jealous of her beauty. From a forced marriage to a vigorous young oaf, to a tawdry start in films, to a treacherous ménage with two narcissistic bisexual boys, to stardom, addiction, more hollow marriages, a ghastly tryst with the President—along the way, there are too many disasters to catalogue.

She'd freeze she'd walk off the set staggering like a drunk woman
sometimes she'd shake her hands at the wrists so hard, it was like
a hurt bird trying to fly...in this shimmering mostly transparent
gown they'd concocted for Monroe showing those mammoth boobs & the
twin cheeks of her fantastic jelly-ass & the dress dipped low in
the back showing the entire back to practically her tailbone there
was the tragic terrified woman emerging out of Sugar Kane like a
confectioner's sugar mask melting & it's Medea beneath...


Oates is particularly effected in evoking a world where private and public violently intersect, creating an arena of no safety and no sense; in this unmoored universe, the banal and the infinite crisscross and then run garishly together—as they do in life. Monroe goes to have an abortion, in a car driven by a studio chauffeur:

The woman with the gloved hands made a face that might be described
as a smile-frown. There was a jolting stop. Norma Jeane was made to
realize that they had traveled through Time. Any role for the actor
is a journey in Time. It is your former self from which you must depart
forever. A sudden curb! A flight of concrete steps! A corridor and a
pungent medical-chemical smell....

One has the impression of a soul that has been, by some impossible error, snatched out of its deep lace in the psyche and thrust into a maze of personality and persona, through which it must grope and blunder, trying to make sense of the earthly barrage of words, images, and ideas like "movie star." In this essential way, the Monroe of Blonde is like every other lost soul,
except that her lost state is so brutally public. Which perhaps is one reason the real woman continues to touch our imaginations.

When Oates has one of Norma Jeane's lovers describe her sexual style, he could, in a way, be describing the book:

"...she'd go so excited, so crazed, there wasn't any rhythm to it...her
body was this gorgeous thing she'd stare at in the mirror but it wasn't
her exactly, and she didn't know how to operate it worth shit. Funny! Norma
Jeane having an orgasm was like stampeding for an exit. Everybody screaming
and trying to push out the door at the same time."

Oates's writing in this book can be crude and overexcited, and if you stay detached from it, it's easy to snicker. But if you get caught up in that feeling of everybody stampeding for the door you forget what you were snickering about—and when she makes it out the door, you're blown away. [Mary Gaitskill, Bookforum]

Posted by Douglas Messerli at 8:22 AM