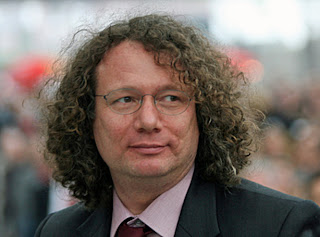 For years German readers and critics had been waiting from the "novel of reunification." Each new work of fiction that dealt with the late 1980s and early 1990s was viewed against the backdrop of this somewhat odd expectation, and, alas, none of them measured up. Yet when in March of 1998 at the Leipzig Book Fair a virtual unknown presented Simple Storys, subtitled "A Novel from the East German Provinces," critics in East and West Germany were unanimous: the reunification novel had finally arrived. Today, after the New Yorker has included Ingo Schulze in its distinguished list of the eight most promising European authors, we may indeed ask: which are the qualities that made Simple Storys, his second book, win that much critical praise?

Schulze, an unlikely media star by any standard, has one great advantage vis-à-vis most of his competitors: he knows firshand what he is talking about, for he was alive and alert in that drowned country named the German Democratic Republic, indeed was part of it. Born in 1963 in Dresden and raised by a single mother, he worked as a theater producer in the town of Altenburg, Thuringia, from 1988 to 1993. He made his deubt in 1995 with a collection of short stories, 33 Moments of Happiness, subtitled St. Petersburg Stories, which recently appeared in the United States, published by Alfred Knopf no less. That first book, also positively reviewed, signaled an original voice at best, but hardly predicted the appearance of Simple Storys, a strange bestseller that turns out to be quite a challenge to an unprepared reader.

What immediately distinguishes Schulze's second novel is its unabashed concentration on East Germany's provinces rather than that former state's more presentable political and economic centers. The novel's characters, winner and losers alike, are frighteningly faceless. In the triumphant autumn of 1989, their social compasses became dysfunctional, and they have been desperately trying to regain orientation ever since. Working as waitresses, secretaries, museum clerks, nurses, they bear names that are common to the point of trivality (as, by the way, is that of their author): Renate Meurer, Conni Schubert, Christian Beyer, et cetera. One of them, having lost his previously secure job, now is forced to make money through embarrassing advertising in the streets of his hometown. But whatever their traumatic ruptures, the characters' way of coming to terms with the sociopolitical transformations is completely apolitical. After all, nobody taught them to resist.

We may safely assume that none of these people belonged to the vanguard of GDR citizens who courageously brought about the so-called Wende (turn), the velvet revolution of ten years ago. On the contrary: passive, introverted, pathetically needy, confused about the present and scared of the future, Schulze's provincial neurotics mostly reside at a prereflective, preverbal stage, and the narrator does not fill in the gaps. The reader has to guess and draw any conclusions from the scare—indeed, all-too-scare—textual information about what really is happening, and to whom and when exactly. Several times, chapters end with a shocking, unforeseen fiasco which reveals to what extent these characters had hidden their thoughts and feelings from their environment and from us, the readers. Schulze leaves it open whether these East Germans' inner desert, emotional frozenness, and social paralysis are a legacy from their communist past or a reaction to the silent threat of imposed westernization. This lack of descriptive precision makes his prose both politically ambiguous and artistically demanding. As a collective portrait of East German mentality, these not-so-simple stories, despite their sociological selectiveness, often enough prove disturbingly authentic. Certain secret speech codes, incomprehensible to foreigners, unite the post-GDR provincials and separate them from intruding West Germans, as if they were a different breed.

It is noteworthy that Schulze's earlier book was still lucidly influenced by the classics of Russian modernism, whereas Simple Storys, with its deliberate spelling mistake in the title [of the original German edition], emulates the laconic dryness of American greats such as Raymond Carver. Some critics have accused Schulze of deliberately obfuscating plot and language in order to achieve a somewhat self-indulgent stylization. It seems to me, however, that the aforementioned lack of orientation on his characters' part coincides with the author's unwillingness—or inability—to create cohesive episocal fabric; in other words, the reflected state of East German consciousness and the style of Schulze's shattered novel are in perfect sync. Certainly such literary quality makes for a difficult read. As a matter of fact, Simple Storys is a novel which gains tremendously from an attentive second reading, for only then do all plot synapses become visible enough to enable the reader to follow this intelligent book's inner logic.
[Peter Rollberg, World Literature Today] from the original German edition.

Posted by greenintegerblog at 9:29 AM