Richard Eder | Review of José Saramago's All the Names 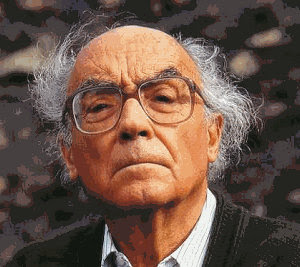 REVIEW OF SARAMAGO'S ALL THE NAMES
by Richard Eder

The dismal registry where Senhor José works is a labyrinth of choked passageways lined with soaring banks of files, dusty and draped in cobwebs. They contain, in one wing of the dank building, the birth and marriage records of Portugal's living. In the other wing, whose outer wall needs periodically to be extended, are the yellowing records of the dead.

"The fate of all paper, from the moment it leaves the factory, is to begin to grow old," observes Senhor José, the downtrodden and upward-persisting protagonist of José Saramago's All the Names. It is an early hint of the connection between the registry and the human condition. The faint perfume of rose and chrysanthemum that drifts through, evoked by what jis written on the paper, is another signal.

An infrangible bureaucratic hierachy runs the place. At the bottom are the clerks, furiously active as they fill out the forms and file or transfer them. Over them are the senior clerks, spared by their subordinates' efforts from any such grueling labor. Above these are the deputies, more leisured still; and finally, the registrar himself. He is a grand personage who arrives long after the others, who never touches a file, whose sporadic orders filter down through the ranks and who, to all appearances, does nothing but think and frown.

Like the maze of Kafka's Castle and the disembodied machineries of The Trial, the registry is a mythical embodiment of the human spirit, entrapped. Mr. Saramago, a recent Nobel Prize winner, is Portuguese, though, not Central European. Fog, not bleakness, regulates his lighting.

There is a blurring effect in his great novel-parables; a kind of mercy. His protagonists are caught as Kafka's are caught, but not permanently. It is not that they escape from the web but that the web loses itself.

That Mr. Saramago is a Communist—the very rare Communist who in all senses is a great writer—is probably significant. Certainly there is nothing ideologically programmed in his fiction, but his little people, unlike K. or Joseph K., manage to prevail over what binds them. That he is an atheist is more important (a decidely Latin Catholic atheist, frequently in trouble with the Church).

His various versions of God—the registrar in All the Names, actual God in The Gospel According to Jesus Christ—are tested, rebuked and sometimes persuaded by his lowly heroes. Jesus, in fact, in The Gospel; and here, the clerk Senhor José. Middle-aged and solitary, José can't accept a humanity defined by the bare facts entered on the files. This meekly servile man sneaks into the registry at night to borrow certain cards and take them back to his shabby apartment next door. He enters them in a scrapbook of newspaper clippings about the 100 most famous Portuguese (something of a numbers stretch, he admits). It is a way of expanding the pinched definitions—only this is life, only this is death—in the registry's universe.

Then one night he finds he has picked up the birth, marriage and divorce file card of an unknown woman by mistake. There are no clippings to work a surrogate enlargement. Only life can do it. In fear and trembling, at comically heroic cost, this mouse grows wings and teeth (both chafe) and ventures out into the world to find her.

It is the beginning of a quest worthy of Don Quixote. Senhor José lacks a horse; he must use hiw jown spindly shanks and once in a whilte, when it is raining especially hard, and at unaffordable expense, a taxi. His Dulcinea is worse than romantically enchanced; when he finally tracks her down, she is dead—depressively, by her own hand.

Yet thie quest is the opposite of depressive. Oddly, and in a fashion too complex to expound her (but recognizable to those familiar with Mr. Saramago's brand of secular and hard-earned miracles) it succeeds, transforming in practical ways those it touches.

Senhor José goes to the address listed in the last entry on his quarry's card, at the time of her divorce years earlier. He questions an old neighbor who had known her from hildhood. Lives spill out: the neighbor had carried on an affair with the woman's father. She gives him the location of the school the woman attended as a girl.

The search grows mythical while remaining entirely down-to-earth and modestly absurd. Senhor José buys lard, a towel and a glass cutter. At night, in pouring rain, he uses them to cut ahole in a window and break into the school. He spends a miserable, soggy night and day—it is the weekend—searching for her files. He helps himself to the contents of the school refrigerator and takes naps in the director's office.

All he comes away with is a half-dozen yearly reports, each with its photograph. Nothing is conclusive, nor is his further search: talking with shopkeepers, her parents, and, finally, visiting the cemetery where she was buried after her suicide just days before.

His travels alternate with erratiac appearances at his job. Strangely, his absences, meticulously noted, are not rebuked. To the contrary, the icy registrar takes an increasinly solicitous interest in his clerk, sending medicine, food and a doctor when he catches cold. The reason remains hidden; it is revealed in a final two pages that instead of closing the story, open it out.

All the Names is a lesser work than some of Mr. Saramago's others: Gosep, The Stone Raft, Blindness and The History of the Siege of Lisbon. It is closes to the last. There, a modest proofreader reverses not just an oppresssive bureaucracy but history itself, and finlds love with a resplendent live woman instead of an elusive dead one. Here and in the other books there is an audacity and energy in the governing conceit that All the Names, occasionally as dusty as its registry, doesn't quite manage.

Mr. Saramago's unpunctuated sentences, bundling together a statement, an objection, a qualification and a digression, need a lot of narrative denotation to tkeep them moving. The quieter Names bogs dozily down from time to time; periodically roused, though, by the lilting surprises of this intensely mishcievous and intensely humane writer. [Richard Eder, The New York Times]

Posted by greenintegerblog at 7:25 AM