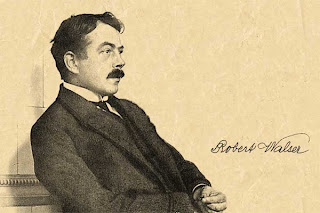 Review of Robert Walser's The Robber
by Stephen Clair

The Swiss-German writer Robert Walser (1878-1956) was a masterful modernist of considerable wit, whose celebration of the ordinary was a noted influence on Kafka, among others. Walser's nutty musing centered more on the discovery of joy in everday things. So it is in his delightful final novel, The Robber. Rescued from Walser's legendary "microscripts" (drafts composed in nearly inpenetrable tiny handwriting), the work reaches English translation 75 years after it was written, and nearly three decades after its first German publication.

Bursting open with, "Edith loves him. More on this later," the novel upsets the reader's balance from the start. The narrator has much to tell concerning this strange love triangle, but hardly any idea how he's going to do it. Filled with anticipations, derailments, and orations, The Robber thus becomes, as translator Susan Bernofsky says in her introduction, "a story about the impossibility of its own telling." Walser's outsider perspective and clownish logic provide a palpable mindscape where anything can happen, or at least threaten to happen.

But who is the Robber? A "true tital of procrastination," who takes pleasure "in robbing himself of pleasure," the Robber might also be Hyde to the narrator's Jekyll (and the two of them could add up to Walser himself). He drifts in and out of narrative as though everything that has even happened to him is occurring all at once. Every line is unexpected but never random. It is as though each sentence has a footnote and each footnote is the rest of the book. What is truly astounding is how Walser makes his own digressive musings read as captivatingly and entertaingly as a traditional tale. Half way through the book, the narrator turns to the reader and says, "these detours I'm making serve the end of filling time, for I really must pull off a book of considerable length."

As in much of his other fiction, Walser boldly sticks out his tongue at buttoned-up society. The Robber is, in one instance, bothered by a woman's incessant yawning in his presence; we soo find him on the street tossing his cigarette butt into a man's "gasping yawnhole," which he celebrates as an "astonishing ashtry maneuver." The narrator, too, offers "excellent tidbits" of paradoxical advice "absolutely free of charge." He suggests that healthy people should take risks, otherwise what's the point of being healthy? "Unfaithfulness," he says, "is morally far more valuable than sentimental clinging and fidelity. That ought to be at least a little clear to even the biggest lump."
In the end, Walser does more than "pull off a book of considerable length." Despite the fact that it is not always clear what has actually taken place, reading this book could make you love your live. [Stephen Clair, Rain Taxi]

Posted by greenintegerblog at 9:37 AM