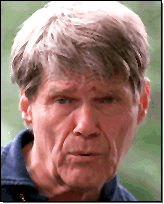 In Finn Carling's latest short novel, Gepardene (The Cheetahs), the author returns once more to the themes of entrapment and individual freedom. Not unlike his 1966 play Gitrene (The Cage Bars), which explores the oppressive relationships between family members confined to cages in a zoo, his new work too places its protagonist in a zoo and questions the role oppression plays in our everyday life. But this time the cage is less a physical constriction than a metaphysical one, and there is an added social critique concerning the treatment both of the elderly and of animals.

As the protagonist, an elderly man named Rabindranath, sits day in and day out on the very same bench in front of the very same caged cheetah, so he explores his condition through storytelling. Exchanging painful fables of various animals and birds confined in cages and chains with a young, invisible girl named Gitanjali, the man draws parallels between himself and the captive animals. The stories emphasize environmental and social estrangement and reveal both the man's desire, and inherent fear, of freedom. Juxtaposed with the man's own investigation into the nature of freedom is the need to hunt down an identity for this strange individual on the part of two zoo employees. The hunt culminates in an abrupt intrusion into three apartments, each of which offers an alternate explanation for the old man's antisocial behavior, and each of which somehow echoes the stories the old man narrates.

Has the man kept a young girl in chains? Has he had a lobotomy? Or has he been prison for twenty years for terrorism? Leaving these questions unanswered, Carling implies the old man has a place in all three worlds. Gepardene may be read as an existential allegory about the human condition wherein pain and sorrow play central roles and close human relationships are not compatible with freedom. At the same time it is a simple story of aging, forgetting, and death.

But in spite of the seeming dark overtones, Carling nevertheless suggests the possibility of a spiritual solution to the ennui of everyday life. Although Carling's freedom has become a fatal story told by an old man sitting on a bench in a zoo, death is portrayed as an angelic disappearance into thin air. In addition, the overt references to the Bengali writer, mystic, and Nobel laureate Rabindranath Tagore and his poetry collection Gitanjali add a certain metaphysical intertextuality. However, because Carling's narrative lacks the intense poetry and mysticism of Tagore's work, and the mixture of fantasy and reality is never completely explored in the narrative, the reader remains unconvinced by Carling's spiritual escape. Again, Carling has given us a dark, if well-written, fable of human existence. [Tanya Thresher, World Literature Today]

Posted by Douglas Messerli at 6:37 AM