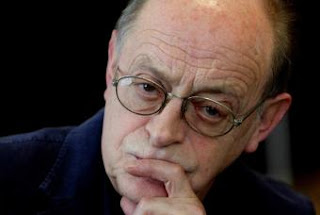 Tabucchi's latest political thriller shows Portugal in the 1990s facing typical end-of-millennium problems like class conflict, economic and cultural globalization, drugs, ethnic oppression, military brutality, and political corruption. Most of The Missing Head follows a Lisbon tabloid reporter named Firmino as he uncovers the facts surrounding the torture and death of Damasceno Monteiro, a young man from the slums of Oporto who runs afoul of a heroin-smuggling operation.

Into this plot Tabucchi weaves several background themes: the plight of Gypsies, transvestites, and other outcasts in modern-day Portugal: the social geography of Oporto; and Firmino's extracurricular interests in Georg Lukács, Elio Vittorini, and the Italian and American influences on 1950s Portuguese literature. Most of the novel's fascinating but undeveloped speculative material comes out in Firmino's dialogues with a lawyer nicknamed Looten (after Charles Laughton). Paid by Firmino's newspaper to take on the Republican National Guardsmen suspected of killing Monteiro, Looton wants to redeem his family's aristocratic past by sticking up for the victims of Portugal's class, ethnic, and political conflicts.

He regales Firmino with observations on everything from Swiss train timetables, Berkeley in the 1950s, and Oporto's local cuisine to the structure of the universe, Hölderlin and Kafka, Rawlsian theories of justice, the grounds of morality, and the psychology of torture. "Millions of stars," he observes after learning of Monteiro's torture, "millions of nebulae, fuck, millions of nebulae, and here we are fretting about electrodes applied to people's genitals." Disappointingly, Tabucchi makes little effort to integrate Loton's speculations and Firmino's literary interests into his somewhat conventional plot. But his elliptical use of allusions lends this thriller's bare events an intriguing range of philosophical and political overtones. [Thomas Hove, The Review of Contemporary Fiction]

Posted by Douglas Messerli at 7:55 AM