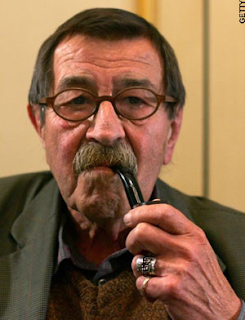 "To mix ink with spit," Günter Grass declared in his 1999 Nobel Prize acceptance speech as being his method, "I chew tough stingy clauses into managebale mush, babble to myself in blissful isolation and put pen to paper only when I hear the proper tone and pitch, resonance and reverberation."

Grass crashed into the international scene with the 1959 publication of The Tin Drum. With his creation of Oskar Matzerath, Grass secured his place in world literature. Little Oskar, a midget self-created at the age of 3, heard his parents plan his future and decided to arrest his development, staying in the shape of a child while retaining the mind of a cunning anarchistic adult. Little Oskar, whose voice can crack glass, flourished his tin drum as his only weapon against the forgetfulness and the awfulness that was German history from 1933 into the postwar period.

Paradoxically, it is only because of little Oskar that the publication of a new Grass novel is regarded as urgent news. Urgent, though readers' expectations for another comparable figure may have been disappointed over the years. With Cat and Mouse, Dog Years, Local Anesthesia and The Rat, The Flounder, and other works, interest in Grass seems dutiful on account of that early success. His novels have seemed increasingly to be mere acts of fancy unconnected to the real world in the way that The Tin Drum resonated. Surely having added to the world's imagination one living human being should be accomplishment enough?

Five years ago, however, Grass once again mixed ink with spit and produced Too Far Afield, now finely translated into English by Krishna Winston. Triumphantly in Fonty, the central character in Too Far Afield, Grass has delivered a creation worthy of Oskar. Fonty and Hotfaller, his companion in talk and walk, nudge, push, shove, slip, crawl, ease their way into our imagination in Berlin as the wall is coming down. "[S]triding toward their destination: tall and thin besore short and squat," Grass writes, "The outlines of their hats and coats, of dark felt and gray wool blend, converged into a unit that grew larger as it approached. The paried phenomenon seemed unstoppable...."

Grass draws on readers' memories of hapless comical duos, of Laurel and Hardy or Don Quixtoe and his faithful Sancho Panza, as they wander through the ruins of a new Germany: "Sometimes the tall half gesticulated, sometimes the short half. Then both would wax eloquent, arms poking out of wide sleeves, the one with the long, swinging gait, the other with short, bustling steps. Their puffs of breath coalesced into little white clouds and floated off. Thus they remained ahead and behind one another, yet grown together into a single form. Since this yoked pair never managed to march in step, it looked as though flickering silhouettes were moving across the screen. The silent film unreeled in the direction..."

Unlike Thomas Bernhard or Samuel Beckett, who'd be content to write a single character speaking an endless monlogue, Grass roots his historical and philosopical meditations in the world, in history, with this odd couple: They engage in dialogues, alternating to each other in the roles of straight man and comic. In the process, Grass hooks the reader with his insinutating style into following this duo in a near-700-page novel about German reunification. Too Far Afield is hlpelessly literary, hopelessly entangled with German history—it moves between past and present, with an unnamed narrator providing the reader with background to understand everything from the first German reunification in 1871 to the horror which is the 20th century in all its coiling implications and ramifications.

But Too Far Afield is also something more: a witty humanistic novel, a story of Fonty, a father, husband and son, who had for many years been a cultural worker in what is nostalgically remembered as the German Democratic Republic (or, simply, East Germany). Fonty (whose real name is Theo Wuttke) likes to identify himself with the historical figure of Theodore Fontane, who is probably best known for the novel Effie Briest. Fontane was an ironic and critical commentator on the first German reunification and was full of foreboding about it: Fonty, aware of Fontane's commentaries, is similarly pessimistic about modern Germany's latest effort at unification. Once shadowed by Hoftaller, who was in various incarnations an agent for the Kaiser's secret service, for the Gestapo, for the East German Stasi, he and Hoftaller now work for the same agency responsible for privatizing former state companies.

Too Far Afield's plot is unconventional, unpredictable: One witty conversational walk succeeds another, characters appear and disappear, books are fondly remembered as apt and telling commentaries and memories arise of World War II, when Fonty worked as a journalist in Occupied France. In a plot twist as memorable as the rebuilding of the walls of Paris in Rabelais, we are introduced to Fonty's French love and the daughter whom he fathered. His daughter's arrival is fortunate, coming as Fonty suffers a psychic, emotional breakdown that is somehow linked to his fears about Germany's bleak, uncertain future.

In the course of reading Too Far Afield, one may feel compelled to seek out a street map of Berlin to follow Fonty in his walks, watch Rainer Werner Fassbinder's version of Effie Briest or read Gordon Craig's biography of Fontane. The reader may even notice Grass' repeated references to Uwe Johnson and remember the discover of his novel, Speculations About Jakob, possibly the best depiction of the exact nature of then-divided Germany.

Grass scrupulously delineates German reunification from the breaking of the Berlin wall, the complicated currency exchanges and the merging of governments to the problem of what to do with property and how to hold accountable those who had perpetrated various abuses in the East German system. He is acidly critical and insightful about the grubbiness of much of the business world and how easily people's spirits are corrupted when the possibility of money-making appears. He also shows us how demoralizing it was for believers in the communist regine once they realized that the system was grossly mendacious.

During a brief respite from the intensity of events in Berlin, Fronty and his wife holiday on the Baltic coast, where they meet Freundlich, a professor firend whose life has been entangled with Nazism and communism. Fonty learns of the harsh treatment of Freundlich, who grew up in exile in Mexico because his father was a Prussian Jewish communist, lives in Berlin and is being investigated for a teaching post by West German professors. Freundlich is subjected to one who tells him, "As a Jew you should understand that a person can't just regress what went before, your long party membership, for instance.... The mistakes we made in the West while coming to terms with our Nazi past mustn't be repeated in the East. Actually you should agree with me, dear colleague, if not as a Jewish Communist, then as a Jewish survivor, for that's what you are..." Freundlich responds, in recounting his experience to Fonty, with a measure of ambiguity: "All frightfully true, isn't it, Fonty?"

Perhaps one of the dangers in German reunification, as in every country with a tumultuous past, is to lose any reference to history. Fonty strenuously resists this historical amnesia as he writes a commentary about the life of Fontane's father. His own father's life mingles with his, resulting in permanent confusion: "At any rate, it sometimes happened that Fonty referred to one when he meant the other, with nothing but good to say of the two departed. So much understanding for two old loners. So many affectionate words for two eccentric blowhards. And so much accumulated gain at the expense of the more distant mothers, who received only respect, for he was still intimidated by their doubly demonstrated strictness; it was only to the fathers, bothced existences like himself, that he always felt close."

Such confusions, the many levels of history and memory, all converge to create a neatly new, exciting and literary world in Too Far Afield. The book is a fitting companion to The Tin Drum. By creating in Fonty a character as intriguing and sympathetic as Oskar, Grass provides his readers with a memorable witness to the rise and fall of another regime which was to have lasted forever. The 1,000-year Reich lasted for 12 years; the communist regime in East Germany for 45 years. No one really yet knows what all those years of lying have done to the human conscience. But with Fonty, Grass reaffirms the power of the human spirit to overcome sorrow. Death, for instance, is sad, but not without humor, as when Fonty mentions his own father's end: He was "shuffled off two years after the construction of the wall for the purposes, in his gardener's terminology, of checking on the radishes from below." [Thomas McGonigle, Los Angeles Times Book World]

Posted by Douglas Messerli at 8:55 AM