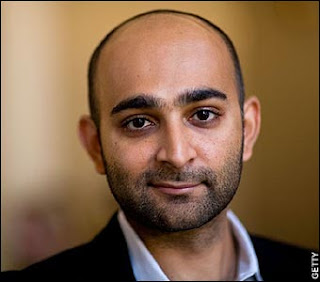 Moshin Hamid's debut novel Moth Smoke is the story of the decline of Darishikoh Shezad (Daru), the "terrible almost her" who loses his way in life and hastens his own fall. Set in Lahore in the sweltering summer of 1998 when India and Pakistan flexed their nuclear muscles at each other, the plot revolves around the events that led Daru to the dock where he now stands accused of a crime he may or may not have committed.

We are introduced to him as "the accused" and the reader is invited to judge him. What follows in mainly Daru's narrative, but other voices are allowed as well. And it is these voices—of his best friend, of his lover, of his eccentric professor, of his partner in crime—that allow for ambiguities and uncertainties in the story as we understand it.

The sequence of events is kicked off by the return to Lahore of Daru's best friend Ozi (Aurangzeb). The two have grown up together, have been as close as brothers. Ozi returns to town, a little balder, somewhat heavier, married, and as charming as always. Caru's life is disrupted; a late night at Ozi's leads to his beling late for an appointment at work the next morning. The client he offends is a feudal politician who promptly gets him fired. Losing his job is the beginning of the end for Daru; from then on its downhill all the way. He begins to run out of money, his electricity is cut off, he falls in love with Ozi's wife Mumtaz, and he tries heroin.

Daru's decline is a much due to events as it is to his own arrogance. Although he is not part of Ozi's glittering decadent world, he has been granted access to it through his friend. He exists on the fringes of the jet-set part scene where sushi and music are flown in from other cities, and Black Label is the drink of the day. Although he sees the decadence and amorality of this world he becomes angry when he is denied access to it. Burdened with the curse of a conscience and no social or financial influence he is unable to find another job and, much to his own detriment, he is unable to change his own expectations. Heroin takes him further down the spiral of decline, and with violence, crime and obsession comes inevitable tragedy.

Hamid writes with wit and candor; taking us through Daru's story without pretentious asides or "exotic" orientalist touches. Immediacy and intimacy are created by the use of the present tense. Hamid depicts Lahore vividly and sketches in characters with little fuss but maximum effect. Ozi's father is the "frequently investigated but as yet unincarcerated" bureaucrat and former army office, part of a corrupt and rotten establishment; Daru's dealer is "Murad Badsha, MA. rickshaw fleet captain and land pirate," a colorful rogue with his own moral framework. In fact, all the characters seem to operate on varying moral principles: Mirad Badshah does a side business in armed robbery because he sees it as inevitable in a society where the discrepancy between rich and poor is so obscene, and Ozi in his own narrative presents a slimily convincing case for himself. He argues that his and his father's actions are simply the logical way to operate in a society that is disintegrating. Like any member of an elitist group, he argues that his actions are in the interest of maintaining social order, that he and his family are actually patriotic in their venality!

Hamid uses the multiple narrators in an interesting way. These accounts are about the narrators as much as they are about Daru and the discrepancies between accounts is part of the whole question of judging Daru. It is interesting that an earlier version of this novel was used by the author as his dissertation at Harvard Law School,* and the basic premise of the work was how one can arrive at the truth through conflicting, multilayered narratives. Despite this deliberate framework, the story is not overshadowed by structure, it moves along at a gripping pace.

One of the most arresting themes that runs through the book is that of conflict and fratricide. This is mirrored at several levels: the personal (Daru and Ozi), the political (India and Pakistan), and the historical (the struggle between the sons of the emperor Aurangzeb). The basic intensity of the struggle with its mingled emotions of love and anger is something that is very well conveyed; it is intense hate mingled with the passionate intensity of a long and close association. The story evokes centuries of such conflict right from the much publicized Cain and Abel episode to the present, and because of the nuclear race backdrop it underlines the self-destructive nature of the conflict. The image of a moth mesmerized and drawn hopelessly to the flame wherein it must perish also reinforces this idea of self-destruction. Indeed this recklessness seems almost like a curse of history: a mad compulsive tendency to act without regard for consequences.

The society that Daru exists in is depicted as one where might is right and money is power. It is a society where, as Ozi says, "bigger cars have the right of way." It is a society where the rule of law signifies nothing and where the law is simply a tool used to oppress the enemies of the influential. Daru's slightly middle-class morality is shown to be completely out of place in a system of which he simply does not understand the rules. amoral as they are. He has neither the inferior social standing of Murad Badshah nor the fundamental religious orientation of people like Mujahid Alam, one of "the bearded boys." As such, Daru is of course, the proverbial misfit, the rebel without a cause—the collaborator who feeds off the oppressive elite and benefits from their influence. But despite his own association, he loses respect and affection for his friend when he sees first hand the extent of the latter's ruthlessness. And from that point on, we know that very little can be done to save Daru. This sense of inevitability pervades the book, we wait for the smell of burning moth flesh, for things can end no other way.

Despite the vivid picture that Moth Smoke creates of a violent, fragmented society, the picture is simply the backdrop. Moth Smoke is essentially about very basic human conflicts: love and betrayal, crime and punishment. It is about failure and inequity, disappointment and loneliness. Hamid manages to tell a story of this intensity with immense directness and intelligence. The narrative ranges from the witty and absurd to the truly operatic in high tragedy. Moth Smoke is a contemporary tale, an age-old story. Somehow Hamid manages to put it together using all sorts of different elements. The result is surely one of the most powerful English-language novels to come out of the subcontinent in recent times. [Umber Khairi, The Toronto Review of Contemporary Writing Abroad]