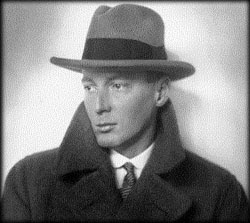 Written after the banning of the authors 1941 cryptic resistance work Mars im Widder, this impressionistic pseudo-mystery novel is only slightly less subversive than the previous text. The reunion of an Austro-Hungarian cavalry regiment in 1925 Vienna provides the setting for a murder investigation and excursions into the lives of the officers. Lernet-Holenia's often used theme of false identity and the character of the enigmatic, intellectual woman are both present and effective. The differing fates of the various officers provide allegories for the (self-) destruction of an Old Order.

A poetically elegiac work on the transitory nature of life, it manages to evoke a lost "Austria" to a world where the name and what it symbolized was forbidden. Often compared to the prose of Hofmannsthal and Proust, it has been called "one of the most beautiful novels in Austrian literature," —Paul Kruntorad. [Robert von Dassanowsky]
Posted by greenintegerblog at 10:27 AM