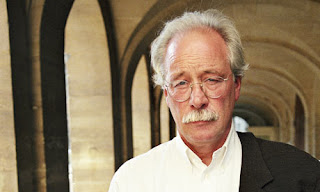 AT ODDS
by Douglas Messerli

The death by a car accident on December 14 of this year of W. G. Sebald led me to read his first fiction, Vertigo, a book, along with his The Emigrants and The Rings of Saturn many of my friends have long championed.

In many respects Sebald might remind one of his younger contemporary, Javier Marias. Like Marias, Sebald does not so much tell a single story than observe and seek out a series of coincidental events, historical and personal, which he weaves together through photographs and linguistic images from literature, history, his travels and his own past. All of these aspects, superficially similar to Marias' narratives, exist in Vertigo, as the narrator moves from Marie Henri Beyle's (better known as Stendhal) terrifying memories of crossing St. Bernard pass with Napoleon's army to the Sebald's own journeys from Venice to Verona, from the journey of Kafka to Riva, near Desenzano, to a recounting of Sebald's youth in the German village of W.

Through the numerous events in each of the book's four parts, Sebald explores amazing coincidences: for example, a fellow traveler reads Leonardo Sciascia's book 1912 + 1 soon after a friend reminds Sebald that on the journey Kafka took to Riva in 1913, where he may have witnessed that year's Verona opera festival's first production, Aïda. Later, in the town of W, Sebald sees the numbers 1913 over a doorway, and the book ends with a passage from the 1913 version of Samuel Pepys's diary, found in the attic of a building in which he had lived as a child.

Again and again, there is an eerie connection between unrelated things, seeming to present a puzzle for which there is no solution. The various gaps between these events or pieces of information create a sense of dislocation and confusion, as remembered scenes are revealed as false, and what appear as dreams become reality. There is, in short, a sense of dizzying vertigo throughout Sebald's book, as if places, objects, and events have a reality separate from the people who are involved with them.

It is just this sense of vertiginous reality that separates Sebald's literary world from Marias's. Where Sebald actively attempts to connect or at least to understand these "coincidences," Marias often seems just as happy to simply witness and point them out. And there is, accordingly, numerous moments of stupor, of a sickening sense of irreality, in Sebald's work that is fortunately lacking in Marias's writings. One might simply chalk it up to the radically different sensibilities of the Germans and the Spaniards, but there seems to be something else that lies behind the differences which also subtracts from the personal joy I might have expected from reading just such a text.

Perhaps it emanates from the much more academic interest Sebald takes in these strange occurrences. Unlike Marias, who declares that he is often a passive observer of the unusual facts and texts he discovers, at several instances Sebald actively researches the past, visiting libraries and friends with special information with whom he attempts to make sense of these puzzles. The fact that no coherent truth is ever possible, however, appears to take on disorienting aspects, almost haunting his life. Marias is far more like a kind of amateur sleuth, who will gladly take on his adventures, but is more often just has happy to find no apparent answer.

In short, there is a sense of angst to Sebald's world, and the writers he features, Stendhal and Kafka, share his feelings of displacement. It is as if Sebald were a high modernist who has discovered himself in a postmodern world, and he is not at all happy about that fact. He often seems to be working at odds to his own tales, as if all the disconnections, accidental photographs, and odd peregrinations he recounts were an expression of his failure to create a more coherent whole.

Yet, there is another perspective about this; for at several points, particularly in recounting his childhood, we know or at least suppose a coherent reality to explain away the strangeness. But he cannot or will not speak out to those around him or even attempt to explain the story to himself. One of the best examples of this is his witnessing the beautiful barmaid at the Alderwirt, Romona, having sex in the back of the building with a isolate former hunter, Schlag. The next morning he discovers the bar's owner has utterly destroyed everything in the place, and later in the day, Schlag's body is found at foot of an icy cliff, where, so it is believed, he inexplicably (he is a seasoned walker in this territory) has fallen to his death. Sebald recounts these events just as if they were as oddly coincidental as all the others he relates. But we suppose, at least, that here there is a connection, that somehow that the Alderwirt landlord, Sallaba, also discovered the sexual act, reacting with rage against the old sinner. In this and other cases, accordingly, it feels as if the author was purposely withholding information, refusing to reveal any logic in a world where he has painfully determined to be utterly mystifying.

It is this desperate search for coherence under conditions where memory and significance are so vague, I believe, that draw so many readers to Sebald's books. Like Sebald, they feel utterly ill-at-ease, even sickly, when they face the inexplicably dangerous terrain standing before them. I simply do not share the great dis-ease, and somewhat irritated for having to endure it.