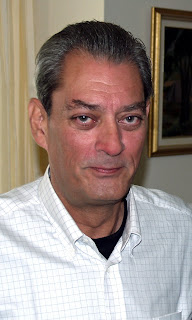 BEYOND
by Douglas Messerli

Sidney Orr, the major figure of Paul Auster’s 2003 fiction Oracle Night, like many of his writer, amateur detective and emotionally vulnerable characters, is a man in recovery. Orr has just gone through a terrible illness from which he was expected to die, but from which he survived. A figure one might describe as the typical Auster character, he is a miraculous survivor akin to Nathan Glass in his 2006 novel, Brooklyn Follies, whose life is nearly stolen before he is able to recover and rediscover it as a bountiful gift.

Orr returns slowly to everyday life and his career as a writer, beginning with short trips out into his Brooklyn neighborhood for groceries and writing supplies, which quickly leads to his purchase of a near magical blue notebook which reenergizes his writing as well as opening him up to new relationships—including a friendship and later animosity with the notebook’s seller, M. R. Chang—and perceptions of the nature of his friendships and loves present and past. As for many of Auster’s characters, a great number of Orr’s new realizations are connected merely by chance. In Oracle Night the chance encounter with Chang leads to further encounters and the discovery of the Portuguese notebook coincides with an announcement of a Portuguese translation of one of his works. Yet this work is less a novel of chance than it is a novel of awakening and a slow dance around the dozens of betrayals of lovers, friends, sons, and acquaintances that make up the social fabric of Orr’s once seemingly solid, but now frail existence.

With the magical Portuguese notebook in hand, Orr discovers that, just as the dancer is compelled to dance in The Red Shoes, he is swept up in a near creative frenzy of writing within the blue notebook. Borrowing plot structures from Dashiell Hammett’s The Maltese Falcon, Orr tells the story of an editor, Nick Bowen, who, upon encountering the granddaughter, Rosa Leightman, of a noted writer of the 1920s, suddenly leaves his wife, disappearing into a new life of anonymity in Kansas City. There he joins forces with a collector of telephone books who hires Nick to catalogue and arrange his hundreds of volumes—representing nearly every major city from every year back to 1946 and before—which he keeps in an strange subterranean room, within which is a locked sort of fall-out shelter where Nick has been given free board. The two men work together on Ed’s slightly insane project until one day Ed suffers a heart attack, from which he dies during an operation for a heart bypass. Returning to the underground room, Nick forgets his key to the shelter where he sleeps, locking himself in with no possible escape!

So too has the author, Orr, locked his narrative into a corner. The blue notebook has betrayed him! Where can the story go from here? Just as the character, Nick, has betrayed his wife and his potential lover, Rosa, so has Orr unintentionally betrayed his character and tale. In this story within a story there is suddenly no way out!

Meanwhile, in Auster’s primary narrative, Sidney Orr and his beautiful wife Grace, who has just discovered that she is pregnant, dine with their close friend, the noted author John Trause, who is suffering from a painful blood clot. Trause is a close friend of Orr’s, but is even closer, serving as a kind of uncle-mentor, to Grace. The dinner is fraught with psychological warfare, as the suffering Trause, Orr’s supportive but fragile wife, and the seemingly oblivious younger writer play out their camaraderie in the context of more hidden interrelationships—relationships, we discover later, that include not only friendship and mentorship, but envy, pity, and both spiritual and sexual love.

Some time after, Orr reencounters the mysterious stationery store owner, Chang, who takes him—despite Orr’s protests—to a strange bar in Flushing, where beautiful, naked women service their clients in the booths. His sexual submission to a sensual Haitian woman forces him to recognize that he, like his character Nick, has now betrayed his wife. His wife’s uncharacteristic behavior over the past few days, moreover—along with her sudden disappearance for a day—ultimately leads him to perceive that Trause’s paternal-like relationship with his wife has transformed into a sexual involvement, likely stimulated by Orr’s own illness and her fears of his possible death.

Suddenly, into this emotional stew Auster throws Trause’s fourteen-year-old son, Jacob, now temporarily housed in a halfway house to keep him off drugs. The son, who seems fond of Sidney, has had a long, inexplicable hatred of Grace, which Orr now realizes is related to the fact that, in role of Trause’s lover, she had been seen as attempting to replace the boy’s actual mother.

When Sidney’s and Grace’s apartment is robbed and ransacked—with only a few precious items missing and some of Grace’s drawings ripped apart—it becomes apparent that the boy is the culprit. In the final scenes, Jacob again shows up at their apartment, demanding $5,000, insisting that he needs it for a payment which will save him from being murdered. The couple doesn’t have the money, and demands the boy leave their house; Jacob retaliates, severely beating Grace, before Orr, after unsuccessfully attempting to pull him off his victim, finally threatens to kill the boy, knife in hand.

The attack results in Grace’s hospitalization and the loss of her child, soon after the moment when, unknown to them, the blood clot loosens itself in Trause’s leg, ending his life. Trause, we later discover, had only recently rewritten his will, disinheriting his son and writing a check to Sidney and Grace to cover their outstanding debts. A year later, Jacob’s decayed body is found. As he predicted, he has been murdered for his failure to pay his debt.

In short, Oracle Night, as I suggested earlier, is a book of betrayals. Friend has betrayed friend, husband his wife, wife her husband, father his son, son his father and friends. In the end, even the author, in his cold objectivity, seems to betray the violently desperate Jacob.

Yet as readers we inherently comprehend Auster’s position. For the boy alone has failed to pay his debt, while the others have found a way through suffering to give back to the world in which they exist. Despite all the betrayals portrayed, there are no grand scenes in Oracle Night played out of a sense of angry injustice. Each of these characters silently forgives his betrayers, comprehending the failures of all human beings, and accepting those he or she loves as part of the many quiet disappointments that love entails. While all the characters of this work suffer physical and psychological pain, only Jacob and M. R. Chang blame others; the rest of Auster’s figures ultimately accept themselves and one another, redeeming and reclaiming their place in the chain of interconnecting events. As the narrator breaks down into sobs at the end of this fiction, it is not out of sorrow as much as relief, for he perceives of himself:

I was happy, happier to be alive than I had ever been before. It was
a happiness beyond consolation, beyond misery, beyond all the ugliness
and beauty of the world.

Like so many of Auster’s growing list of characters who find themselves at odds with the world in which they exist, Sidney Orr, John Trause, and Grace survive the brutality of life out of a sense of happiness that lies beyond—beyond both the ugliness and beauty of the world—through an artfully lived life. The oracle of the novel’s title has perhaps remained incomprehensible, but most of this fiction’s characters, unlike Sidney’s character Nick, have “found the key,” have intuitively found ways to answer the questions of their existence and the meaning of their lives for themselves.