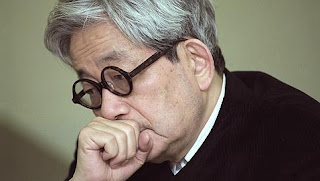 COMMUNITY OF THOUGHT
by Douglas Messerli

Nobel prize-winning novelist Oë Kenzaburo’s 1964 novel, Kojinteki Na Taiken, translated into English as A Personal Matter in 1969, is a work very much of the early 1960s. A young man, Bird, is about to become a father, but the night of his child’s birth he is in turmoil as he perceives that with the birth will come all the responsibilities of fatherhood that will thwart any dream he may have had of a romantic life as an adventurer. For Bird is obsessed with traveling to Africa, and has, as the story opens, just purchased maps of the continent. Outside of the shop he encounters a woman who seems to be stalking him, and when he turns toward her he discovers a drag queen, who recognizes his mistake in following this small bird-like man, whose whole body, apparently, suggests his moniker.

The incident is seemingly unimportant, except that Oë portrays Bird as actually imagining what it might be like to go home with this figure, to spend a night in her/his arms. And we quickly recognize just how disaffected from his life Bird is, how removed he is from his own existence. When, at the end of this novel, he reencounters a friend—who, as a youth, Bird abandoned during their search for a supposed criminal—now a homosexual who runs a nearby gay bar, we recognize that Bird has spent most of his life denying social involvement and hiding from the kind of existence with which he is faced.

Arriving at the hospital, he discovers that the child—unknown to its mother—has been born with a brain hernia, with a large lump extending from its head. He accompanies the baby’s transfer to a facility better able to deal with the medical problem, the family determined to keep the truth from his wife. The baby is expected to die before the morning, and, given the circumstances, Bird is almost relieved by that information. He knows his marriage will never survive the existence of a near brain-dead child. To pay for the medical attention, moreover, Bird has had to withdraw all the money he has secretly saved for his African safari.

Bird, we are told, has previously gone through a long period of total drunkenness, and faced with the new situation in which he must lie to his wife and cope with the infant’s death, he takes a bottle of scotch to the house of a former girlfriend, determined to drink himself into forgetfulness.

His girlfriend, Himiko, was an innocent when he knew her (she reveals that their first encounter, a sort of drunken rape, was her first sexual experience), but she is now a seasoned veteran of sex. Her husband has inexplicably committed suicide, and she has sought out sexual contact as a way of dealing with her suffering.

Predictably, Bird falls into a kind of drunken stupor, and when he shows up to teach his class the next day, he vomits in front of his students—resulting, ultimately, in the loss of his job. At the hospital, the child is still living, perhaps even becoming stronger. Bird tacitly seeks the doctor’s help in allowing the child to die; he and the doctors determine the infant will be fed only sugar water instead of milk. He dutifully attends to his wife, but with the complicity of her mother, continues to keep the horrible truth from her, insisting the child has only a defective organ.

Returning to Himiko, Bird is faced with a bleak future on any account. Sex with Himiko reveals to him just how unfulfilled his sexual life has been with his wife. Like Bird, moreover, Himiko is unpredictable, child-like, and, accordingly, able to calm the high-strung boy-man in her bed. As she begins to avidly study the maps and other works of his imaginary adventure, she soon catches—as if it were a virus—Bird’s enthusiasm for the voyage. Her visiting father suggests that she sell her home and take the trip with him. Bird must explain to the old man that he is married and faces a bleak existence.

Back at the hospital, the doctors are determined, given the survival of the infant, to operate. Bird is suddenly horrified—not because of possible complications, but by the fact that the child may live, burdening his life beyond endurance. Himiko suggests they take the child to another doctor, a former lover specializing in back-street abortions, who will kill the baby. Bird is determined that it is his only choice, and together they make their way across the rainy city, the child on his father’s lap, as they intensely search for the “clinic” before it closes. By the late hour of their arrival, it has nearly closed and the infant has caught pneumonia. The couple escapes to the nearby gay bar, owned—as I reported earlier—by Bird’s ex-friend.

The friend, Kikuhiko—after whom Bird has strangely named his own infant son—relieves Bird’s guilt for leaving him alone with an American G.I. intent, apparently, on a sexual encounter. “A homosexual,” he tells Bird, “is someone who has chosen to let himself love a person of the same sex: and I made that decision myself. So the responsibility is all my own.”

These words, which Himiko compares to existentialism, reawaken Bird to the responsibilities he has refused throughout the days since his child was born; and he suddenly comes to life, determined to take the child back to the hospital for the operation. Indeed, we later find out the child did not have a hernia, but merely a benign tumor, the fault in his skull being only “a few millimeters across.” In his final action, Bird has saved his baby’s life.

It is clear that Oë presents Bird—who at fiction’s end sheds his childhood nickname—as a kind of existentialist hero, as an individual who ultimately acts out of societal moral imperatives as opposed to the more tempting selfish behavior. Himiko, in fact, does sell her house, and at work’s end has begun her voyage to Africa, accompanied by a man-boy even more immature than Bird.

For all of the self-congratulatory back-slapping of the final pages of Oë’s fiction, however, we may still feel strangely ill at ease with his hero’s moral awakening. Is Bird truly a kind of existentialist hero, or has he just done the expected thing, behaved only as his family and culture have expected? Certainly, the relationship with his near-frigid wife does not promise change. Their child may grow up, we are told, with a low IQ, unable to properly function in the world into which he has been born. Has Bird truly escaped the life of leap-frogging “from one deception to another,” or has he merely taken up the societal deception of peace and order?

In fact, another, more psychological reading, wherein one might explore Bird’s self-expressed fear of the vagina after the birth of his “monster” son—a fetish remedied by Himiko encouraging him to engage in anal intercourse—and relate it to his thoughts early in the novel of spending the night with a transvestite and a period soon after his marriage when he spent weeks in a drunken stupor, that might lead us to question his sexuality. His sexual partner, Himiko, is a kind of bisexual figure, and Bird names his son after the openly homosexual Kikuhiko. In short, either Oë is not aware of the psychological alternatives he has created for his own character, or he is presenting the last scenes of this book—filled with familial congratulations for Bird’s exemplary behavior—ironically.

If Bird’s imagined voyage to Africa—in its unthinking associations with freedom and unadulterated beauty of a continent nearly blighted and destroyed by the industrial Western nations—is a childish obsession, so too may be his new-found role of what will surely be a fatherhood of silent suffering. One can only wonder how Bird telling the truth—to both his wife and to himself—might have altered everything. It is fascinating to see how existentialism is played out in a culture of consensus such as Japan in a time in which I have described American cultural expectations as dominating nearly everyone’s lives. At novel’s end the former “Bird,” seems to have abandoned hope in favor of forbearance, actions of abstinence and endurance.