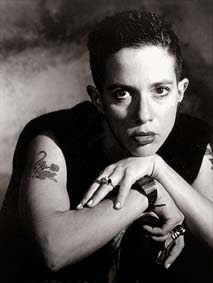 GRANDMOTHER TO THE BRAT PACK
by Douglas Messerli

After reading Literal Madness I have become convinced that there are at least two Kathy Ackers. One, the well-known punk celebrity, author of purposely styleless prose, might be described—in the context of our cultural vulturism, wherein we currently embrace the new (artists under 30) and abandon the old (artists who create for more than five years)—as a grandmother to the "brat pack," the current literary celebrities of a New York publishing scene desperate to keep the myth of bad boy/girl author alive.

Suitably, this Acker has chosen, as her subject of the first of two novels included in this book, Pier Paolo Pasolini, the Rimbaud of the 1960s generation, who was bludgeoned to death in 1975 by a young man who Pasolini may or may not have sought out for a sexual encounter. In Acker's version it hardly matters. For Pasolini is not really her focus but serves as an emblem of the position in which she would place herself: a political-sexual being who writes from a need to express those issues in action rather than the desire to create an aesthetic object.

As for Pasolini, sex, language, and violence are Acker's themes, which through a collaging of madcap renderings of scenes from Shakespeare, an absurdly intense correspondence between the Bronte sisters, ridiculous parodies of German Expressionist theater of the 1920s and of the present-Situationist aesthetics, and personal memories and asides, Acker explores from a multitude of perspectives. Through such radical shifts Acker prods the reader, as a child might a chameleon, to re-adapt to each new backdrop, demonstrating his own colors—political and sexual—in the process.

If this sounds like a "profound experience," Acker means it as such. With graduate seminar precision she drops statements into her humorous blending of porn and corn such as the following: "Language is more important than meaning. Don't make anything out of broken-up syntax cause you're looking to make meaning where nonsense will. Of course nonsense isn't just nonsense." An interesting concept. But for those who seek in Acker's writing a true exploration of "broken-up" syntax, her writing will be a disappointment—unless by broken syntax Acker means her insistent investigation of jargon, cliché, and stereotype with language such as "Huh" and, Romeo speaking this time, "As an upper-middle-class Jewish boy, I'm trying to do what's right by my wife."

For the most part, Acker's language, in part because of its constant shift of context, its borrowings—the veneration of plagiarism she expresses—doesn't allow us to comprehend the values of her language, good or bad. All becomes equal in this Acker's satiric hands. Certainly we are forced through Acker's devices to comprehend how different languages affect and manipulate us. But are some languages, some ways of communicating, richer than others? Are there languages—languages of politics, sex, even of violence—which we can speak that open ourselves more fully to one another? This Acker doesn't really seek such answers; her transparent narrative collage of forms and content merely elicits such questions.

But there is another Acker, a writer of the late 1960s and 1970s of The Childlike Life of the Black Tarantula and The Adult Life of Toulouse Lautrec, who is represented in Literal Madness by Kathy Goes to Haiti. And this Acker presents us with another kind of writing, a writing that shares some of the same methods and concerns, but speaks to us out of a delightful mock-naïveté that reminds one at times of the Dick and Jane readers rewritten as manuals for politics and sex. Here Acker presents herself less as the naughty semiotician lecturing the MLA in leather tights than as a sort of drugged-out Judy Garland, perpetually announcing, as she does in Kathy Goes to Haiti, "I just want to see Haiti." And see Haiti she does.

Through the eyes of the various men who follow her about, each demanding of her that he become her "boyfriend," Acker explores all the political, social, and sexual ramifications of this colonial culture. When Kathy falls in love with Roger, the son of the wealthy land baron le Mystere, we are treated to a wonderfully insightful portrayal of corruption and power of the world dominated by Papa Doc. By the time she visits a voodoo doctor to free her of the spell cast over her, the young wide-eyed seeker of adventure, who throughout the novel keeps searching for an American to speak to, finds herself singing in a language she does not understand.

In writing of the sort found in Kathy Goes to Haiti, we recognize that Acker has been able to fuse languages, to bring different languages together in a simultaneity that encourages the reader to read everything, as the voodoo doctor keeps insisting about his actions, as if it was the most important thing in life. Nonsense isn't just nonsense in this work, and Acker is able to engage the reader accordingly in a fable that is at once hilarious and terrifying, that has all the logic of a Caribbean tour and a nightmare combined.

And this is the Acker I prefer.