Douglas Messerli | Hiding Out (on DeLillo's The Body Artist) 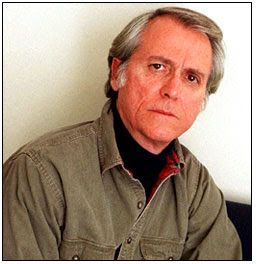 HIDING OUT
by Douglas Messerli

We first glimpse Lauren Hartke and her husband Rey Robles at breakfast in the seaside New England house they have rented. Like any couple, they go through the mechanics of eating, side by side, with little conversation, he awaiting the toast which must go through two cycles of toasting, she mostly staring into her bowl of soya, cereal and fruit which she is about to eat. They meet only at the edges of life to discuss a hair she has found in the juice, the birds darting across their window, and a strange noise in the house they have both heard. While in their silence, however, we not only recognize the normal patterns of a married couple, but the fact that they are also resisting something—trying to hide something from themselves not only about their relationship, but to escape living. Both, we later discover, are performers of sorts: Lauren, a body artist, a woman who performs less with language than her entire body, transforming herself into other figures; Rey, a film director who has apparently spent his life entertaining others in order to transform himself from a Spanish "war baby" into a Hollywood figure, uses his gifts of language and sex to obtain his version of the American dream.

That same morning, we discover later in the book, Rey has disappears on a long drive, ultimately arriving in the New York City apartment of his ex-wife, where he puts a gun to his head and commits suicide. DeLillo makes no attempt to explain these actions, nor does he give us much evidence through which to psychologically analyze their obviously failed relationship. Indeed the author almost seems to hide any possible information which might help us understand their acts.

Why, for instance, after the death, does Lauren remain at the isolated summer house, despite the pleas of her friends to return to New York? Far more importantly, why does she allow the man she discovers hiding out in that house—the source, perhaps, of the noise they have both heard—to remain there? Although she ruminates that she should be contacting mental institutions, old people's homes, and other places from which the strange man living in her house may have escaped, she passively accepts his entry into her life, even going so far as to bathe and shave him.

One obviously suspects that this being, whom she calls Mr. Tuttle, a person unable to speak coherent sentences, may be a figment of her imagination, a replacement for the missing Rey. It is tempting to see him as a kind of ghost-like figure created by her imagination to help alleviate the loneliness she must now endure. Indeed DeLillo, in several vaguely suggestive passages, presents this stranger as just such a transformative figure:

He moved uneasily in space, indoors or out, as if the air had bends
and warps. She watched him sidle into the house, walking with a
slight shuffle. He feared levitation maybe.

He looked not pleased exactly but otherwise satisfied, technically
satisfied to have managed the last cluster of words. And it was in
fact, coming from Mr. Tuttle, a formulation she heard in its echoing
depths. Four words only. But he'd placed her in a set of counter-
surroundings, of simultaneous insides and outsides. The house, the
sea-planet outside it, and how the word alone referred to her and to
the house and how the word sea reinforced the idea of solitude but
suggested a vigorous release as well, a means of escape from the
book-walled limits of self.

When Mr. Tuttle does speak at greater length, she realizes that the words coming from his mouth are not his own, but fragments of conversations between herself and Rey, remnants from the lives of two beings as hidden from reality as Mr. Tuttle has been from them.

In short, The Body Artist is less about the performance of living (although the situations Lauren experiences are later performed by her in New York) as about the traces of lives. It is as if DeLillo were creating characters by drawing his fingers across a mirror or a window, revealing them momentarily as the light, air, and flickering movements of nature just a quickly shift our attention away, so that we discover, upon refocusing on the sketches, they have all but disappeared. The author, accordingly, seems less interested in the humans populating his work than in the fragmentary images of their body parts:

In other words, DeLillo presents this work less in old-fashioned literary terms than in snippets of images, as in film. Moreover, we gradually come to see that it is a filmy, hazy world, a fabrication of reality, in which Lauren and Rey have lived.

By the work's end, we can only wonder whether or not Lauren will give into her hidden world, inhabit the vision of a sexual hysteric, or step out into the "real" world which with she has seldom engaged. Even she is uncertain, as she expects to enter a room where he (Rey, Mr. Tuttle, whoever he is) sits smoking. Instead, she enters the room to find no one there, only her own imprint on the side of the bed where she has slept:

The room was empty when she looked. No one was there. The
light was so vibrant she could see the true colors of the walls and floor.
She'd never seen the walls before....
She walked into the room and went to the window. She opened it.
She threw the window open. She didn't know why she did this.
Then she knew. She wanted to feel the sea tang on her face and the
flow of time in her body, to tell her who she was.

Posted by greenintegerblog at 9:07 AM