Douglas Messerli | How Things Are (on Gracq's King Cophetua) 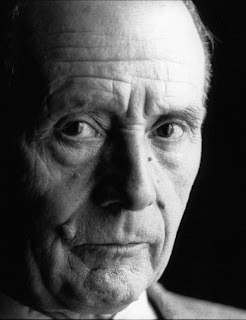 HOW THINGS ARE
by Douglas Messerli

King Cophetua is one of those wonderful fictions which call up more questions than they answer, a work that so involves the reader that he or she will find it difficult to transform the experience of reading into an easy analysis or summarization of the text. In short, the sensuous pleasure of reading this work is at one with the meaning of the work, and one feels one could easily return to the text with little diminution of that enjoyment.

In Gracq’s short work the focus, indeed, is all upon the senses: the appearance of the small, northern French village, Braye-la-Forét, to where the narrator has been lured, its grey-dark and green buildings and surrounding forests, the feeling of the intense wind and storm, the smells of the wet soil and nearby ocean, and the sounds of that storm and distant gun-fire of the war. So evocative are Gracq’s descriptions (not realistic, necessarily, but poetically charged) that I found myself in that blissful situation of willingly reading many pages several times!

The story is nearly invisible, in fact, is so transparent that it has little substance. A man who has fought and been injured in the “Great” War feels all of the fatigue of the years of battle. Living in wartime Paris, he is invited to the country by a long-time friend, an experimental composer and aviator, Jacques Nueil, to visit his villa. A somewhat dandyish figure who reminds the narrator of a time before the war (of Apollinaire’s poems, of the stories of the gentleman-thief Arsène Lupin, and of images of Mauriace Chevalier with his fashionable sailor hat “set jauntily over one eye”), Nueil, a “voisin” (neighborhood) pilot fighter, has been granted leave and will meet him there on the afternoon of All Saints’ Day.

As the storm brews, blowing piles of dead leaves across the lawns of the villa, the narrator awaits the arrival of Nueil. As night comes on, the guest, left in Nueil’s studio by the servant girl, begins to hear the far-off sounds of warfare. His emotions—alternating between the excitement stirred up by the sounds and smells of the storm and the despair and terror he feels in the distant flashes of bombs exploding and volleys of cannons—exhausts him as he sits alone in his host’s house, attempting to makes sense of the invitation and events of the day. The mix of sounds of tree branches scraping against the house, the raging storm and the sound of distant gunfire calls up an image of Goya’s La Mala Noche, which seems to parallel his feelings:

La mala noche…. These words came to mind, opening up
a stream of thoughts. In the trembling twilight of the candles,
images slipped in and out without resistance; suddenly, the
memory of an etching by Goya blotted out all others. Against
the dark background of black graphite, two women emerge
from a stormy night: one black form, the other white. What is
happening on that lonely moor, in the middle of that moonless
night: Sabbath—kidnapping—infanticide? All the forbidden,
disputed elements of this nocturnal meeting seem to have taken
cover underneath the heavy, billowing skirts of the child ravisher’s
black silhouette, and in her shadowed face with its Mongolian,
impassible traits and slanted, heavy-lidded eyes. But the light
of the limestone which sharply outlines the white silhouette
against the night, and the furious wind blowing a light-colored
petticoat high up on her hips, revealing perfect legs, wind that
whips her veil like a flag and outlines the draped contours of a
shoulder and a charming head, are entirely the forces of desire.

The combination, indeed, of the forces of nature, beauty, terror and desire—all silhouetted, hidden, confused, interfused—become the themes of this novella, as the narrator sinks into the silence of the house and experiences a time apart from the world which he has temporarily escaped.

He realizes at last that his host will not be returning that night, that he is left alone in this strangely unfurnished, museum-like home with the servant girl, whom it suddenly flashes upon him, perhaps, is a servant-mistress of the master of the house.

The girl leads him into the dining room where he is served dinner. As he observes her silent ceremonies of serving the food in a nearby mirror, he begins to feel an excitement in her very presence: “whenever she approached to serve me, even at a distance from the faint yet vital warmth of her bare arm, I instantly felt a burning sensation on the back of my hand.”

When she momentarily leaves the room, he rises to look more closely at the only image hung upon the walls—the second picture that dominates Gracq’s tale—King Cophetua and the Beggar Maid (Sir Edward Coley Burne-Jones’ version of which hangs in the Tate Gallery). The image is based on the ancient tales of the African king who, apparently, disdained women (“From natures lawes he did decline, / For sure he was not of my minde, / He cared not for women-kind”) until one day, upon glimpsing a barefoot beggar-girl dressed in grey, he fell suddenly in love with her and asked her to marry him.

Mentioned in several Shakespeare plays, set to poetry by Lord Alfred Tennyson and Hugo von Hofmannsthal, this story is also sometimes sited as a source for the Pygmalion myth used by George Bernard Shaw, and is even referred to by Agatha Christie in the novel The Body in the Library as the “Cophetua syndrome,” a malady that strikes the upper-class Englishman who becomes infatuated with a working-class girl.

Certainly that is what happens in Gracq’s work, for as the evening progresses the narrator becomes more and more agitated, temporarily escaping the house, and returning to the village to discern whether a message has been left in the post office. But after ringing the bell, which no one answers, he is left with no choice but to return to the villa, where he is led silently upstairs by the girl into her bed.

In Gracq’s version, the girl is, like the figure in the Goya painting, all in silhouette, her long black hair almost indistinguishable from her dress, her face turned away from him, even in their sexual embraces. Only after they fall asleep and he awakens to watch her, does he have the opportunity to look into her face.

Upon rising in the morning, he escapes the house to a nearby café for coffee, realizing that a “parenthesis had closed, but it left in its wake something tender and burning inside of me that only time could erase.” Even in the last line, “and I thought that today, all day long, it would still be Sunday,” we are unsure whether or not he will return to the house and resume his relationship or perceive it as simply an enlivening episode in an otherwise fatigued life.

As I suggested previously, more questions arise than are answered. Had Nueil intended to show up? Has he been killed in battle? The narrator even seems to ponder—quickly dismissing the idea—that perhaps Nueil (as Herminien brought his lover Heide for his friend’s approval in Gracq’s The Castle of Argol) has planned for the encounter between the narrator and servant.

One thing seems to be clear: despite her near total silence and subservient position throughout, the serving girl apparently is in complete control. Twice, the narrator recognizes in her demeanor an acceptance of things “as they are,” almost imagines her speaking:, “This is how things are.” Even here, however, we wonder, is this a justification for his sexual encounter? Although she seems to have been a willing participant, has she simply acquiesced to an act over which she recognizes she has no control? In a sense, the story is not at all about the male “conquerors,” in either their wartime battles or their sexual encounters, but concerns the silent woman and the power she holds within which keeps her apart from the would-be conquerors of her heart. As in several of Gracq’s works, there is an unsettling homoerotic element in the heterosexual act; as the narrator observes the sleeping woman, he is overwhelmed not as much by her presence as by Nueil’s:

Suddenly, I visualized quite clearly the loaded airplane flying in
the midst of its roar high up in the starry night, its course charted
by readings of the earth down below punctured by fires and lined
like a map by the criss-cross network of piano strings—the dust-
encrusted bulk of the pilot, barely awake, wrapped in his shawls
and furs, the face illuminated from below, not so much by the
lights of the instrument panel as by the fixed image of that woman,
appeasing yet cruel, perhaps the only image where she could
again take shape and live only for him.

In Gracq’s mysteriously sensuous world, men seem to enjoy sex most fully only through the eyes of their fellow men. Man, in short, is an eternal outsider to his own sexual appetites, and, accordingly, is never truly at home with the pleasures of life.

What does that, in turn, say about the very causes of war and the suffering which results? Perhaps if men could find a home within which, like Nueil’s servant, to live peacefully with “how things are,” they would not need to destroy others in their searches and struggles for satisfaction. If the narrator has found, at least, a temporary peace, we recognize that time will eventually erase it and the war resume.