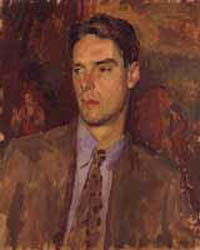 The figure at the center of Anthony Powell’s satiric “dialogue fiction” is Lushington, far too serious and lugubrious for the events he encounters. Like Henry Green’s Party Going, this book begins in a pea-soup fog in London, involving, just as in Green’s work, an affair with a woman, the beautiful Lucy, who allows Lushington to observe her during her bath; yet, just as in Green’s fiction, little occurs since she is apparently in love with Lushington’s close friend, Da Costa, who represents England in an unnamed Baltic country.

At least Lushington has consummated his relationship with Lucy; it is unclear that Lucy’s beloved Da Costa has ever had sex, since he seems utterly disinterested in women, attending to them—just as he attends to foreign service—distractedly and ineffectually. If Lushington seems confused and without direction, Da Costa is an absolute fool whose major attentions appea to be focused on his overly eager-to-serve and ridiculously loquacious valet, Pope, known to his former army comrades as “the Duke.”

Indeed, nearly everyone in Powell’s delicious put-down of “international relationships” is an out-sized type, nearly all of them desperately seeking love, with few of them knowing how to achieve it. On the boat over to the mysterious Baltic country, Lushington, sent there by his newspaper, meets several of these figures, including the sad and disintegrating Russian Count Scherbatcheff and the far more outrageous and pretentious Count Bobel, both of whom will be ostracized from the society of this Baltic country, which is suffering the later stages of an attempt at Russian takeover. Throughout the entire work, there is an underlying fear of murders and bombing, which at first merely intrigues Lushington, but later thoroughly involves him and ends in his necessary escape from the scene of which he is supposed to be reporting.

Also on the voyage over, the reporter meets two women, Baroness Puckler and Frau Mavrin, the latter a handsome and elegantly poised woman with whom he becomes sexually involved. It is his relationship with Frau Mavrin and his pretended friendship with Mavrin’s clueless, academic husband, Panteleimon, that lends Lushington any dimension, and stirs up, from time to time, Powell’s otherwise rather static plot.

Indeed, it is as if all of these figures and others were attempting to play out their lives simply to be brought into the pages of Lushington’s newspaper. For behind the scenes nearly all their lives are empty and quite meaningless. When Lushington visits his friend Scherbatcheff we encounter a kind of hellish apartment wherein various members of his family go about their paltry lives trying to walk round and ignore each other’s presences. Despite the Count’s good-natured acceptance of his condition, the visit is one of the most painful scenes of Powell’s book, and through it we suddenly comprehend the character's depressive and, ultimately, consumptive state of mind and body. His death is cruelly announced in Powell’s work: “And then one day Count Scherbatcheff died.”

Frau Mavrin’s home life is hardly better, as she, Lushington, and others, visiting one late night, must awaken her husband, who, forced to dress, appears only as his guests are about to leave, and is left little to do but help them take the unresponsive elevator down to the street. Later, Panteleimon pours out his fears of his wife’s affairs to Lushington, all his suspicions pointing to Da Costa, with whom he seems determined to fight a duel, while Lushington, the guilty one, feeds him platitudes.

Bobel is clearly a fool who cannot even attain a central table at the local cabaret, Maxims. Cortney, an American, is as clumsy and empty-minded as they come, while the militaristic stooge, Waldemar, is more concerned with his uniform than any ideas he might express.

While one might worry about the fate of this small Baltic country, there is so little at the center of this outlandish place, that, like Lushington, we are hard pressed to care about its affairs. While in reality, I care very much about and loved my visits in Lithuania, Latvia, and Estonia, the non-existent Powell Baltic spot seems to survive on a series of nightly parties in which very little happens and even less is intelligently discussed. But then, to be fair to Powell, neither have we heard any intelligent conversation in London presented in this book!

It is only a tragedy than lends any significance to Lushington’s stay in “Venusberg,” a world where love seems to matter more than anything else. After attending the annual grand ball, Lushington, tired and disturbed by Frau Marvin’s foul moods (she is furious about his imminent departure), decides to walk home in the cold, while his friend Da Costa escorts her home.

Assassins, attempting to kill Police Commissar Kuno attack a drosky, killing both Da Costa and, as Lushington later discovers, Frau Mavrin, instead. Called up in the middle of the night by Pope, Lushington serves as a witness to his friends' respectability.

As meaningless as has been his trip to this country, the reporter travels back to face what will clearly be an always slightly disinterested Lucy, surely settling into a home life as meaningless as all those lives he has just witnessed.

As in all his Powell’s works, the slightly bitter satire is infused with a brilliance of language that redeems the characters’ lack of signification.