Douglas Messerli | Invention Serves Remembrance (on Agee's A Death in the Family: A Restoration of the Author's Text) 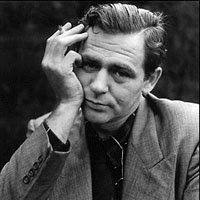 James Agee A Death in the Family: A Restoration of the Author's Text, edited by Michael A. Lofaro (Knoxville: The University of Tennessee Press, 2007)

In a year (2008) in which I had determined, after writing about my father's death in 2002, to read James Agee's A Death in the Family, it seemed that I was fated to read the newly released "restored" edition of that book. I admit that I was not completely enthused by the idea, particularly after having read, in March, the review of the "restoration" in the Los Angeles Times Book Review which argued that David McDowell's editing of the original publication of the Agee work in 1957 was "superior" to the Lofaro text:

Lofaro conjectures that McDowell “changed the novel to suit the popular
tastes of the 1950s and increase the book’s marketability”; he does not
consider that McDowell might have made his decisions for a simpler
reason: to create the best possible book. The new chapters, while
interesting, don’t add much to our understanding of Jay or Mary or
young Rufus. In fact, everything that needs to be established –
the tenderness and conflict within the marriage, Jay’s drinking and
tendency to drive too fast, Rufus’ deep sensitivity and his near-worshipful
relationship with his father – is handled perfectly, and more economic-
ally, in the original version.

The critic goes on to argue that Lofaro's "most egregious" decision was to remove the "Knoxville: Summer 1915" section, replacing it with a nightmare sequence, which, "with its graphic violence and religious symbolism, is heavy-handed and not nearly as effective."

In short, he concludes, "Lofaro has made a mess of it."

My own intuition, moreover, was that what Lofaro argued was Agee's intention of a straight-forward, chronologically-ordered narrative seemed far less interesting than the flashbacks and other modernist narrative devices introduced by McDowell. The sheer size and heft of the "restored" edition, along with these reservations, led me to put off reading the Lofaro edition until late in the year.

Fortunately, the time in early December in which I came to the fiction also allowed me to slow down the pace of the reading and to more carefully consider Lofaro's voluminous series of notes and annotations—nearly as long as the work itself.

I have now come to feel that the restored version, contrary to the reviewer's insistence, is far superior: clearer, more emotionally engaging, and, most importantly, in concert with the author's desires.

Agee, it is apparent, never intended his beautiful set piece, "Knoxville: Summer, 1915," first published in Partisan Review in 1938, to be included in A Death in the Family. And the situation he describes in that prose poem, although it may remind one of the poetic tone and certain incidents in the fiction, makes it seem as if the young boy's uncle and aunt, "living at home," were residing within his own house. Emma, his sister, appears nowhere in that short piece. And the poem ends with a dilemma of self-identity that is not at all an issue in A Death in the Family.

Lofaro admits that there is no way of definitively knowing that Agee intended to begin his work with the horrifying dream sequence about a John the Baptist-like being, killed by the mobs of the city; but it is also clear that there is no other place for it in the work, despite it being contained in the original manuscripts.

The dream episode seems quite obviously that of an older man, still haunted by the death of his father; and Agee's own analysis at the end of that dream that the corpse was the father and his recognition that "He [the narrator]

all seem to point to the very beginning of the imaginative voyage upon which the rest of the work will take the reader. As Agee wrote in 1948 to his dead father:

Let me explain what I am trying to do here [in this work].
I have lived, now, a year longer than you were given to live. I feel
very heavy in the sense of life and death, and very heavy in my
sense of uncertainty and of failure in my life so far.... My way of
trying to handle these things is to try to recall and understand
my life, as well as I can, and to try to write it down as clearly and
as well as I can.

As Agee wrote his mother:

I am trying to write a short book, a novel, beginning with the first things
I can remember, and ending with my father's burial. The whole closing
section is to be as clear an account as I can make of everything I can
remember, from the morning I woke up and learned that he had died
the night before, through to the end of the afternoon of the funeral.

He notes elsewhere that he is trying to write a narrative that is as chronologically correct and clear as he can make it. "In most novels, properly enough, remembrance serves invention. In this volume," Agee proclaims, "invention has served remembrance."

More importantly, Lofaro shows us that Agee saw this work less as "a novel"—even though he himself, as I have noted above, refers to the work as "a novel"—than as an autobiography, a work, had he lived longer, that might have been embedded within other writings about his ancestors, his mother and father's relationship, and his own later education and writing experiences.

The Lofaro edition adds ten chapters and restores versions of three other chapters, as well as bringing parts of the text together which were previously divided. The newly-found chapters that Lofaro includes slow down the work and draw the reader into the detail of Agee's world. Indeed, it is this series of details wherein this work has its deepest meaning. As I have written elsewhere, A Death in the Family virtually has no plot. We know from the outset what the major event of the work entails: the father's death. And anyone who has experienced the death of a family member can imagine the effects on a family. What is remarkable about his writing is how Agee makes his family members (Lofaro restores the actual family names, Agee and Tyler, to his text) so immediate and real: the way they cook, shop, worry for and about each other, and share and disagree with each other regarding viewpoints on various issues such as sexuality and religion. The familial details of life are at the heart of Agee's work, and Lofaro's version not only enhances these, but allows the reader to better understand the relationship of husband and wife, father and son, mother and son, and brother and sister.

Had the original editor, McDowell, more transparently admitted his radical editorial changes, I think no one might blame him for his decisions; I agree with Lofaro's analysis that "he changed the novel to suit the popular tastes of the 1950s and increase the book's marketability." The decision to produce a shorter work, the various flashbacks in time and space are quite understandable in a decade in which readers were assimilating Faulkner's great experiments and reading new works by Nabokov, Salinger, Bellow and others. Within this context, Agee's work, as he intended it, does seem somewhat "old-fashioned."

But McDowell felt it necessary to disavow any major changes, insisting in his "A Note on This Book":

There has been no re-writing, and nothing has been eliminated except
for a few cases of first-draft material which he later re-worked at
greater length, and one section of seven-odd pages which the editors
were unable satisfactorily to fit into the body of the novel [apparently
the prologue of Lofaro's edition].

If nothing else, however, Lofaro definitively shows just how extensive McDowell's changes were, revealing in many respects how different this book is from the original publication and, just as importantly I would argue, how different is a novel from an autobiography.

Admittedly, there are a few problems with this "restoration." Agee did not title any of his sections or chapters; Lofaro has chosen to title sections, some with words from the text that seem, within the context of Agee's poetical writing, rather awkward, such as "This little boy you live in," "Perceptions c. 1911-1912" and "Enter the Ford: Travel, 1913-1916." Lofaro also occasionally explains some of Agee's dialect word choices, placing them in brackets within the text, while I feel this might have been better handled through a discrete asterisk with a same-page note. But these are minor quibbles in what has clearly been a long labor of love.

Rather than "making a mess of it," I would argue, Lofaro has utterly clarified Agee's intentions and revealed an astounding contribution to American autobiographical writing.

Posted by Douglas Messerli at 8:30 AM