Douglas Messerli | Not at Home (on Alois Hotschnig's Maybe This Time) 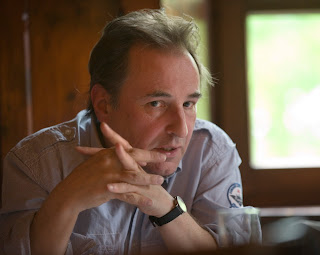 NOT AT HOME
by Douglas Messerli

Austrian writer Alois Hotschnig's 2006 collection of short stories titled Die Kinder beruhigte des nicht (That Didn't Reassure the Children) is filled with empty people, shadow-images of life who haunt seemingly ordinary worlds, where no one seems to notice if these figures are present or missing.

In the first story, "The Same Silence, the Same Noise," a man rents a lakeside home, becoming entranced by the never-ending blandness of his neighbors, who each day sit peacefully on their deckchairs, staring into space. It is as if they have no other life, and he becomes so transfixed by this emptiness that watching them becomes a kind of mania. A first he watches out of the corner of his eyes or unseen from a window like a voyeur. But even when one of them turns to catch him at the act, there seems to be no recognition on their part. Gradually, accordingly, he becomes more and more open about his interest in their timeless stares into space, at one point boating out to their sundeck, struggling ashore with the intention to sit in their chairs in order to better understand the passivity of their lives.

Of course, in his mania, he too has become isolated and useless. He no longer sees friends, talks to few, and like his neighbors, leads an idle life. When he finally grows disgusted with his actions, he discovers the previous tenant of his house has returned, like him intently staring at the couple, just as if he has been hypnotized. The current renter suddenly discovers a new focus of attention:

He sat there now, in my place, and I watched him from the house, which
soon I no longer left and I didn't take my eyes off him, but saw how he
stared over at them, as they stared into the water, and I looked over at them
every day, every night, always, until now.

In the eerie tale "Then a Door Opens and Swings Shut," Karl, a man on his way to visit friends, is lured into a neighbor's house, where a woman keeps a vast collection of seemingly hand-made dolls. She shows him some of the dolls before she begins to talk about someone in the house who has been waiting for Karl, waiting evidently for years for his arrival. The him is a doll, also named Karl, who is the spitting image of the man, and strangely, meeting this doll, a feeling of piece comes over him; they become, somehow, friends.

Karl returns to the house several times, soon beginning to recognize some of the dolls as replicas of people of the village. The neighborhood children, who the woman also tries to lure into her house, all fear her—with good reason. For, after several visits, the woman begins to make love to the doll Karl in front of the man, licking him obscenely. But as he watches the woman with the doll upon her lap, he grows more and more peaceful, reminded of the joys of his childhood. His relationship his own wife begins to fray as he becomes more and more "used to the old woman's idiosyncrasies."

One day, however, he discovers in a cabinet different costumes for the dolls, shockingly coming across shoes, sweaters, pants, and other articles of clothing that he, too, wore as a child. And ultimately the man himself becomes one of her dolls, and through the doll is petted and cuddled.

Eventually, the licking, cuddling, petting is transformed into the woman's consumption of the doll:

She kept licking tenderly and sucking, and now put the entire hand
into her mouth, which also melted and vanished. ...She ate and relished
it, and, again and again, I sat there before her, watching as I disappeared
into her and as she deteriorated more and more right before my eyes.

She begins to consume all the dolls, and when he returns, her eyes are no longer directed at him, but towards all. She has devoured her world.

Perhaps the best tale of this short but spell-binding collection is "Maybe This time, Maybe Now," from which the translator has selected her English-language title. Here the numerous family members seem to be quite normal, gathering at holidays, birthdays, and other family events regularly in seeming joyfulness and celebration. Yet we soon learn that there is always one person missing, their Father's brother Walter, who, although he often promises to attend, never appears. As the tale progresses we gradually learn that the family eternally forgives Walter his absence, but the children's parents and other brothers and sisters still are convinced each time that "this time" Walter will appear. The narrator even attempts to skip these events, realizing that no one at these family gatherings is really important; only, he who is the focus of everyone's attention, really matters. Yet the narrator finds it hard to stay away, and returns to the pattern. Occasionally, Walter's wife visits, but never her husband, as she hurries away to discover what happened to him.

Walter, it gradually appears, is less a person than an unspoken desire, a desire different perhaps to everyone, but wished for always. While the family is surrounded by love and fulfillment, their focus remains on their emptiness. In short, the very reason for their gathering betrays their failure to live fully and love.

In the Kafkaesque "The Beginning of Something," a person discovers in the mirror "a stranger's face," and believes he is dreaming. But each time he arises to wash his face and rid himself the dream's residue, he has more and more difficulty in returning to his own past, his own life. He has, in short, "escaped himself," and is unable to return to reality. He feels he has done something terrible, but realizes that those that seek him will never come; that he has become a living lie, an unreality.

Similarly, in "You Don't Know Them, They're Strangers," a man is called by another name and discovers things in his apartment that do not seem to be his. The neighbors, who he does not know, suddenly seem to know him, a stranger telephones, claiming to be a friend, arranging a meeting. But he doesn't know this "friend" either, who speaks knowledgably of the man's past.

The next morning he goes to work, but there he also is greeted by people he does not really know; although he goes through the actions, he not sure what he is expected to do. A woman arrives at his apartment, "She'd come to pick him up as he was bound to have her waiting again or not to have show up at all."

These events begin to happen regularly, and the man begins to wonder whether or not he has memory lapses or is totally distracted. But after a while, the pattern becomes familiar; his job changes daily. He never knows the people around him who claim his friendship. At least the apartment remains the same, but then it too begins to change, and a random visiting of other addresses surprises him with people who know him, or strangers and even enemies. Once, he is even mistaken for the man he was before all the changes had taken place.

Soon he begins to travel to other neighborhoods, even other cities, his key fitting into the lock of any door he chooses. He is greeted by people in other apartments as if he has arrived home. His own previous life, whatever it might have been, no longer exists. Like Woody Allen's Zelig his being has become a part of everyone else's experiences.

In each of these nine nearly flawlessly-crafted tales, the ego shifts or disappears, and with it people become something other than they were or are revealed to never have been who thought they were in the first place. Identity in this rapidly shifting world, the author seems to suggest, no longer means anything. As everyone quickly adapts to become another or each other, no one is any longer "at home" and children can find no safe place in which to survive.

Posted by Douglas Messerli at 7:50 AM