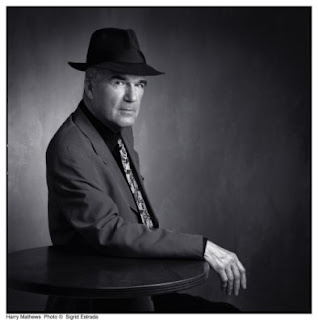 OUR WONDERFUL LIVES
by Douglas Messerli

I have long felt that Harry Mathews is one of the best American fiction writers who came of age in the mid-twentieth century, and his newest fiction confirms my opinion. Mathews’s 2005 work, My Life in CIA, might be said to represent a late-career shift in style and subject, imbuing his work with a new accessibility not unlike that of Gertrude Stein, whose late-life The Autobiography of Alice B. Toklas has generally been represented by critics (including myself) as a simplification of her previous bravura techniques. Like Stein, Mathews appears in this work to be writing an autobiography, strange as that lived experience may seem, a work very different, for example, from his earlier convoluted tale of an obsessive journalist (hero of The Journalist) who uncovers shockingly “secret” information about his family and friends.

For one personally acquainted with Mathews as I am, the facts of this seemingly experiential recounting of his illusionary life as a CIA agent at first seem almost plausible. The tall and trim, often behatted Mathews—whom many individuals also mistakenly perceived as being gay (in part because he had several gay friends, John Ashbery among them) and as a man of “independent means” (even I presumed this, since he had, it appeared, two addresses in France, a Key West abode and an apartment in New York)—seemed almost to match the image one might conjure up of a CIA operative (although one must admit Mathews dressed, when I met him, far too foppishly to fit the mold.) In Paris of the early 1970s, accordingly, friends and strangers alike suspected that he was an agent, and the more he attempted to deny it the firmer they grew in their beliefs. The fact that he had a diplomat friend who became ambassador to Laos in the midst of the Viet Nam War and that Mathews visited him in Laos in 1965—information leaked, unknown to him, by real agents and perhaps members of the French Communist Party—gave credence to the gossip.

Understandably, Mathews—in reality an experimental author sympathetic with several liberal and leftist causes and the only American member of the French-based group of writers, mathematicians, and scientists called the Oulipo (Ouvrior de literature potentielle) who employ a wide range of formal constraints in their literary endeavors—grew increasingly distressed by these rumors. In 1972 Mathews met two Chileans, Silvia Uribe and Enrique Cabót, who encouraged him, along with other French friends, to enjoy his unwanted celebrity by embracing it, to pretend he was an agent, a game which might also give him entry to different elements of French society and, if nothing else, provide him with an entertaining avocation.

Part of the great fun of this “fiction” is Mathews’ recounting of how he goes about—often unwittingly—to establish his CIA identity, reasserting the rumors with more concrete evidence. Since most agents hide their activities behind fabricated employers, Mathews creates a mythical travel agency (named after his real avant-garde journal of Locus Solus), listing himself among other non-existent directors. The company, amazingly, attracts the interest of some who ask him to lecture and, others, ultimately, who hire him for covert deliveries of documents. Most of his efforts to establish his “CIA connection” are ridiculously ineffective: observing that someone appears to be following his footsteps, the author takes absurdly convoluted walks, marking his tracks in chalk upon certain buildings along the way, even renting a car to stage an imaginary “drop.” But when he meets a supposed businessman, Patrick Burton-Cheyne—a new acquaintance whose employment involves him in activities seemingly in synch with that of an undercover agent—Mathews is educated in new ruses which grow increasingly complex, ending in attempts to make contact with the French Communist Party and other organizations.

At this point, the reader also begins to realize that the seemingly plausible “adventures” of the author begin to move into the realm of marvelous fabulation, as Mathews describes various escapades, including several sexually unconsummated encounters with a beautiful woman and an interrupted sexual episode with a weaver of Turkish rugs, which ends with him being rolled up in the rug and his accidental delivery to a party of right-wing conspirators who, after a lavish dinner, play an Oulipean-like game of Squat in which he is forced to improvise lyrics rhymed with words such as swastika, haddock, jonquil, plectrum, gardenia and farthing while he and others dance.

As the story moves forward, Mathews—without completely perceiving the extent of his involvement—is caught up in a vortex of coincidental assumptions and events inevitably leading to his attempted assassination by individuals from both the political right and left. His advisor and friend Patrick disappears, and after failing to gain access to the Communists, he is warned for his own safety to leave France. His final escape reminds one of something out of a James Bond movie, as he seemingly kills one of his adversaries and apparently eludes his enemies by joining up with a family of sheep-herders.

Just as the author-narrator finds himself moving from what might be a very real dilemma to a fantastically absurd series of events, so too do we, as readers, experience a shift from a very plausible autobiographical tale to an entertaining invention. By book’s end we no longer can separate the “real” (his life in Paris, his friendship with the noted author Georges Perec, his involvement with Oulipo, etc.) from completely fabricated situations. Just as Stein weaves real events into a fictional autobiographical story with herself as the center of grand adulation, so too does Mathews present himself within the context of a great adventure worthy of being filmed by a major American studio. Even the author believes what he overhears in an East German café, that he has been “terminated with extreme prejudice”; for the prejudice emanates, perhaps, not only from some unknown outsider, but from the author himself.

Like Stein’s The Autobiography of Alice B. Toklas, Mathews represents his life through the voice of a being that is as fictional as any reader’s representation of his or her self. While it may be wonderful if others could perceive how exciting each of our lives has been, we might also find ourselves, like the hero of Mathews’s fiction, in great danger. For, if nothing else, our lies and selfishly coincidental participation in villainous acts would turn everyone against us, perhaps even our own consciences. Are not all Americans, for example, covert agents behind the war in Iraq? Were we not all, as political activists argued, somehow involved in the atrocities of Viet Nam? Perhaps that’s why so many Americans resist all attempts to describe and reveal the events of our own lives; for only those who remain ignorant of their involvement in the world can pretend to the innocence to which most of our countrymen seem to aspire.