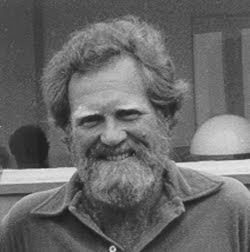 POSSIBILITIES OF COINCIDENCE
by Douglas Messerli

Years ago—as a university colleague and a regular dinner companion—I told Toby Olson that his fiction reminded me, in some ways, of the paintings of Frederick Edwin Church, one of the notable Hudson River School painters of the 19th century. As in Church’s landscapes, Olson’s fictions pictured everything with the utmost detail and, consequently, seemed to give all its subjects–-animate and inanimate—equal importance; as in Church’s paintings, where each leaf and blade of grass is represented with as much attention as the largest objects of his canvases, so in Olson’s writing there is a strange lack of proportion. It’s an American concept, I argue; everything is as important as everything else; there is no sense of hierarchy, no difference nor differance.

I don’t know if Olson remembers our conversation, but in his next novel, Dorit in Lesbos, he named his major character Jack Church, and the hero’s uncle, Edward Church, was a painter who painted with the same painstaking detail: “...I saw the subtle art, the supple roundness and the actuality of the flesh tones, even the blemishes, the realism of the nails, and the way fingers intertwined....” Indeed, in this novel the elder Church paints subtle emblems and signs into his work, layering the painting so that the objects reveal things hidden behind them. As in his previous novels (with the exception perhaps of his first, poetically-conceived fiction The Life of Jesus), Dorit was a highly detailed book. Nearly everything was in the minute details of the language.

Write Letter to Billy is no exception. Following the familiar plot structure of most of Olson’s novels, this work begins with a call to the narrator informing him of a relation he knew little about–in this instance it is a daughter, of whose existence he has known nothing–which leads to a voyage through the familial past–in this case, with daughter in tow–that is both a mystery and an adventure that may redeem his future life. This basic Olsonic structure is an almost abstract pattern of movement that propels his fictions, and makes them the exciting mysteries which his admirers so enjoy. Fleshing out this basic structure, however, are all the details, thousands and thousands of details about everything from how to deep-sea dive to the minute aspects that he recalls of his mother’s face; from the detailed mechanical constructions of his now dead father, to childhood memories of, this time round, Los Angeles and its environs. Together the two, the familiar story pattern and uninflected detail of present and past, go hand in hand to create some of the finest writing of American realism today.

But as readers of Olson’s novels know, there is another pattern engaged in nearly all of his works, a pattern revealed in the very title Dorit in Lesbos. As American as Olson’s writing is (so completely antithetical to the more European-inspired metaphysical mysteries of Paul Auster or Raymond Federman, for example) Olson’s work is also very Dickensian in the sense that, while on the surface everything is very orderly, visible, contained, explained, internally—internal both to characters and the story itself—all is coincidence: not “chance” as in Auster’s works, but the old fashioned, plot-driven contrivance of coincidence.

Write Letter to Billy is almost a prose poem to the possibilities of coincidence. Led on by a list he finds in the boxes that remain of his dead father’s possessions, Billy and his teenage daughter Jen set out on their visit to Laguna Beach to explore a long ago mystery of the death of Susan Rennert. Along the way, Billy discovers that as a child, exploring the maze of interconnecting concrete tunnels meandering under the Los Angeles streets, he, oddly enough, had visited the dead girl’s home and kissed her in a nearby abandoned house. Later, he and his daughter discover photographs that link the dead woman to his parents and to his mother’s jewelry which Billy has subsequently passed on to the young Jen. It turns out that the girl he had kissed was the dead woman’s cousin, raised as a twin sister, and that the cousin–are you ready for this?–has been engaged in a long-time relationship with Billy’s twin brother, whose existence is a complete surprise to him. Nicholas Nickleby move over!

For that is only the beginning. Estelle Rennert (who has murdered her mother—actually her aunt—and caused the death of her sister—actually her cousin, except that she and Susan unknowingly shared the same father) wants the necklace she has sold to Billy’s mother years before back; it’s worth a great deal of money. So while they hold Jen as ransom, Billy is sent from Catalina off to Laguna Beach to retrieve it. But his intentions are different; by putting his diving skills to work, he is determined to climb aboard the boat as it leaves Catalina harbor and surprise the villains (Estelle and Billy’s own twin brother). But a fall into a cliff-side cave, the rope dropping below him, ends all his good intentions. He is trapped in the cave. Attempting to escape through a small chimney-like structure at the cave’s back he discovers an old suitcase partially blocking the would-be exit. But this is not just any suitcase, but is his father’s, left nearby when the family had gone to this same spot years before, when the father, setting up a strange metal contraption emitting a high-pitched noise (beyond the range of human ears) had attracted all the buffalo into the nearby meadow and drawn the famous flying fish of Catalina’s waters up the cliff in masses! The suitcase contains a strange construction that enables Billy to fly, Daedalus-like, to the ship’s deck, knocking over his twin and, combined with the perfectly timed arrival of the police helicopter, sending Estelle over the edge–-both psychologically and physically catapulting her into the ocean, like her sister before her, to drown.

It’s a shame to have to reveal to readers this much of the plot, but it’s hard to explain the effect, let alone the intention of Olson’s novel without the evidence. For as my brief summary makes clear there is, as any detective worth his salt would perceive, something wrong with this picture. On the one hand Olson has loaded his fiction up with the slow accumulation of detail, detail that seems to give everything its equal existence and meaning, its crystalline and clear definition as a work of realist art. But then, out of the shadows, he has pulled something else, a kind of fantasy, an incredible story alike a child’s tale. Olson is no sloppy artisan. So, what to make of the two opposing elements so intricately woven together into this often brilliant friction?

Those who have followed Olson from his earliest novels (Seaview, The Woman Who Escaped from Shame and Utah) to the most recent (Dorit in Lesbos and At Sea) will not be surprised at my descriptions of the elements of fantasy and coincidence in his detail-driven works. It is the sheer accumulation of the coincidence here—the absolute incredulity of the storyline—that makes this work different.

Obviously, the story here–while often emotionally moving–is made, by its series of events, highly comic; and there is almost the feel about the work, in its focus upon an all-American, sensitive but near psychically dead, adult-adolescent hero, of the comic-book exploits of Captain Marvel or Superman. As the young girl’s mother asks near the end of the novel, “She’s made a fucking god of you. What did you do to her?”

And that is precisely the question the novel asks, not of the young daughter, but, perhaps, of Billy himself. What has the world done to make him such a caricature of himself, or, rather, what has the past done to him? This novel is, indeed, a book of the past, a book that questions memory, a book that explores how each of us creates an imagined reality, particularly of our pasts, which ultimately determines our futures, our lives. How can we ever change if we can never quite know who we were, who we have become?

Billy’s adopted parents–and don’t we all in some way, musn’t we all believe that our own parents are not our true heritage?–represent two compelling American types. His mother was an actress, an actress in the way Katherine Hepburn portrayed Mary Tyrone in O’Neill’s Long Day’s Journey Into Night, a woman–-as a family friend describes her–-of “the teatah.” Moreover, like Mary Tyrone, his mother is a not-so-secret addict, not of morphine as in O’Neill, but of alcohol. Like many such a type, she is all sensitivity, all emotion, all self-consuming in her tireless activity of playing to the invisible audience she imagines surrounding her. Even motherhood is, for her, a kind of theatrical activity, a kind of burden bound with its own secrets (it is she who will not tell Billy of his twin brother) to entertain her life. Her all-adoring husband is a type himself: the inventor, a kind of garage-bound madman in the mold of Edison or Bell or the Wright brothers–-except none of his inventions, save the flying Deadulus suit, ever functions. To her imaginary theatrical career, he plays the failed scientist: the Frankenstein always seeking a monster-son. Even his list of his detailed research into Susan Rennert’s death is a failure, is a compendium of wrong turns, misunderstood connections, uncompleted desires: “Write letter to Billy.”

These figures, quite obviously, are two variations of the elements that compel American dreams: the contradictory and often opposing forces of the scientific and the creative, of the imaginative and the money-driven get-rich schemes of America past and present. One has accomplished only the slow accumulation of detail based upon the search for and evaluation of data; the other is all intuitive, dominated by irrational action and coincidence. These, of course, are the magnetic poles of American culture–-and of Olson’s novel.

In the end truth can be recognized only when both elements are given their due: Billy–and it is right of Olson to insist upon his remaining a Billy, a child-like adolescent, instead of a William–-must combine his father’s attention to all the little pieces and parts with the absurd and always unbelievable elements of accident and coincidence to come to an understanding of the past. But, as Olson makes clear at the end of the book, this is not really Billy’s narrative, but is Jen’s, the daughter, told through his words. The reality, ultimately, is that of a young, maturing girl, and accordingly, it is a comic vision, an unrealistic one. Isn’t it always the way of youth, when it is healthy and blessed, that it sees the future full of magical, fantastic and heroically achieved deeds; that Icarus can fly with Daedalus again?