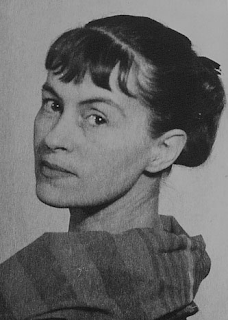 A REAL DOLL
by Douglas Messerli

Written in the third person, present tense with a child-like narrative tone, Zürn's short novel, Dark Spring, about a girl growing up in a bourgeois German home may appear—if one were to skip the introduction and back cover copy—as pretty standard fair. The young child is in love with her father, who like many fathers, fictional and real—particularly those serving in war—is mostly absent. Accordingly, she is left alone with a mostly inattentive mother whose "large, heavy body, which has already lost its beauty," offends her and whose "open mouth, out of which slithers a long naked tongue," reminds her less of a feminine kiss than "the thing hidden in her brother's pants." Like many such a child—one thinks of some of Schnitzler's children, for example—her love is transferred to the servant girl, who reads her romantic novels and introduces the child to her own sexuality and body.

The jealous mother replaces the young servant girl with an "ugly hunchback." Meanwhile, the young girl becomes attracted to a quiet boy at her school and his comic friend, and with them plays "robbers and princesses," in which she usually is captured and tortured to death, suffering the tortures with complete equanimity and almost joyful submission. Gradually, as she explores her own body, the friendship between her and the boy, Eckbert, expands into a quiet love-affair, where the two exchange notes with each other; and almost as suddenly, as with young girls near puberty, she is attracted to a man she sees at the local swimming pool. Her infatuation with this man, from whom she attempts to hide her attraction, leads her ultimately—when he becomes ill and can no longer visit the pool—to seek him out in his own house, traveling to a distant spot in the city. Recognizing her infatuation and the importance of her act, he gently receives her and shares a peach which she has brought him, presenting her with her request of a hair from his head.

If, indeed, this were the entire content of this book, one might argue that—with the exception of the girl's obsessive delight in torture and bestial masturbation—Zürn's narration is that of a typical young girl growing up into the painful time of adolescence. But two events in this fiction stand apart from all others: the young girl's rape by her brother and, after the brother has revealed to her mother the girl's infatuation with the man at the pool, her sudden decision to commit suicide. In reality, both of these may happen far more than we like to imagine. Studies have shown that sibling sexuality is one of the most common forms of child abuse. And what child, male or female, has not at one time or another thought of his or her self-inflicted death. The shock of Zürn's novel is that the young girl completes her act, steps out onto the windowsill and falls "on her head and breaks her neck." The painfully cinematic discovery of the body by the child's dog, who "sticks his head between her legs and begins licking her," ends this startling fiction.

All of this is made more horrifying, however, by the knowledge that a year after the publication of Dark Spring, the author herself jumped to her own death from the balcony of her lover's sixth-floor apartment in Paris. That lover, moreover, was not just any individual, but the artist Hans Bellmer who spent his life photographing stuffed effigies, broken dolls, and Unica herself in a series of photographs of her nude torso bound with string. It is natural, accordingly, to connect the young girl with the author's own biography, a connection encouraged in fact by the author is quoted as having said that Dark Spring is "the erotic life of a little girl based on my own childhood." Obviously, the reader of this book is presented with a near-equivalent of the sensationalist journalism now so common, where one is faced with images of the death or near-death of unknown victims. Does this book seem so fascinating because of its literary value or because of the facts surrounding the author's act of writing it? What is the difference here between life and art?

In her introduction the translator attempts to answer some of these questions. For me, the several variations and differences she describes are, at times, a bit fetching and merely academic; but on the whole, one must agree that to write a work of art and then to enact it are not one and the same. Rather than seeing it as an example of life revealed in art, it is rather an instance of art determining life if—as the translator suggests—the author chose her form of suicide because "it was familiar." And it is, after all, only through the body of her writing, not through the body itself that the reader can come to know this psychologically tortured author.