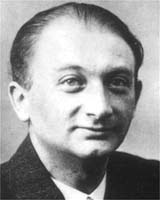 Most of the wonderful stories and novellas collected in this volume represent worlds in which the characters act in ways that seemed destined, the figures themselves moving forward in life without seemingly knowing what motivates them and how they might have in any way transformed their own worlds.

This is particularly true of the earliest stories of Roth's as in "The Honors Student," a perfectly terrible portrait of the bourgeoisie mentality epitomized by Anton Wanzl, the overachieving but completely unimaginative son of the local Postmaster. Anton is the perfect student, aping his masters and winning their favor so successfully that honors are heaped upon him:

His glowing reports, ceremonially folded, were kept in a large
brick-red envelope next to the album of specially beautiful
stamps....

Yet Anton, moving quietly though his life, is not a happy child, but one "consumed by a burning ambition," we are told, by "An iron desire to shine, to outdo all his comrades...." Beloved by his proud parents, Anton returns no emotion. As Roth tells us "He lacked heart," and his first relationship with a young woman, Mizzzi Schinagl, is run more like a campaign to win her mother and father's respect than to romance the girl herself. As he moves into the Gymnasium, he easily forgets her and moves on to a relationship with the daughter of a more successful individual, Court Councilor Sabbaeus Kreitmeyr, eventually winning her hand in marriage over the more romantic entreaties of the artist Hans Pauli.

Anton goes on to become a teacher, ultimately requesting to be transferred back to the small town in which born and raised. There, instead of seeking for a higher position, he feels fulfilled, eventually becoming the Director of the school where he was educated before his frail sensibility, hitherto subject to his intense ambitions, wins. He dies of pneumonia, highly respected by the locals but without having done anything meaningful in his life.

In a similar way, a mother, "Barbara," sacrifices her life and love of her lodger Peter Wendelin to make certain that her son is given every opportunity. The child achieves a kind of success, ultimately becoming a student of divinity. But the thick-skinned boy has no ability at feelings, and, as his mother lies dying, he spends his time with her in abstract talk "about the hereafter, and the reward that awaited the faithful in Heaven." rather than expressing his love. As he "stifles a yawn" and goes out for a breathe of air, Barbara lies dying, alone as ever, "stumbling towards Eternity."

In one of the very best tales of this collection, "April," Roth's narrator is a stranger to a small town wherein he notes the comings and goings of the town's figures. He soon is involved with a lusty barkeeper, Anna, and is amused by several other figures, including the local and beloved Postmaster. One man alone he cannot abide, the assistant railwayman.

I hated the assistant railwayman. He was freckled and unbelievably tall
and erect. Every time I saw him, I thought of writing to the Railway
Minister. I wanted to suggest he use the ugly assistant railwayman as a
telegraph pole somewhere between two little stations....
I couldn't explain my hatred for this official. He was exceptionally
tall, but I don't have principled hatred for anything exceptional. It seemed
to me that the assistant railwayman had shot up so much on purpose, and
riled me. It seemed to me that he had done nothing else since his youth
but acquire freckles and grow. On top of everything else, he had red hair.

One day he discovers, while dining in a nearby restaurant, a beautiful woman in the Postmaster's home who completely captures his attention. Another day he nods to her, and everyday thereafter they greet one another from a distance, the storyteller imagining that she comprehends what is on his mind. The narrator is told that she is the Postmaster's daughter, who is ill. Soon the narrator discovers himself in love with this beautiful woman, but, unable to communicate with her, he determines that he need leave this small town.

It was so ridiculous, I thought, for me to hang around night after night
in front of the windows of a girl who's about to die, and whom I won't
ever be able to kiss. I'm not that young any more, I thought. Every day
is a task, and each one of my hours was a sin against life.

As he enters the train to leave, he sees the abhorrent assistant railwayman, the beautiful girl in the window trailing after.

"Stay, won't you!" I heard the railway employee say to her. "I'm almost
finished!"
But the girl didn't listen to him. She looked at me. We looked at each
other. she stood upright, and she was wearing a white dress, and she was
healthy, and not at all lame, and not at all tubercular. Obviously, she was
the assistant railwayman's fiancée or his wife.

The irony of the situation sends the story's narrator on a long voyage to New York.

The idyll "Strawberries," told primarily through the voice of Naphtali Kroy, describes the adventures of various figures living in a small Eastern European town where each member of the community, poor or rich, play nearly equal parts, the poor being fed by the local Count, and the Count depending for his significance of the local folk. Each of these lives, sometimes comically and at other times tragically are interwoven. But gradually we see the small town changing. The new hotel is constructed, even though there is hardly anyone to inhabit it. To the town square is added a new sculpture dedicated to a local poet, Raphael Stoklos. Finally, an Englishman comes to the city and builds a large new structure without any windows, "a big store, a department store."

The following story, "This Morning, A Letter Arrived..." obviously a follow-up tale in what was presumably to have been a longer fiction, shows the Diaspora of that former community, as Naphtali is described in Buenos Aires and, later, Vienna.
The ordinary Stationmaster, Adam Fallmerayer, married to an even more ordinary woman, one day falls madly in love with a Countess he encounters in a train accident some distance from his station. Drafted into War, the Stationmaster teaches himself Russian and, one day, finds himself stationed not far from the Countess's home in the Kiev region. Visiting her, he arranges another meeting and before they know it the two have fallen in love. Fallmerayer's wife writes to say she is leaving him. As the Russian revolutionary forces move toward them, they flee to Monte Carlo, where the Countess becomes pregnant.

By coincidence the Count, who has also been fighting in the war, arrives in Monte Carlo, where he is greeted by the Countess and her lover. But the man Fallmerayer discovers is not at all one with whom he might battle for his love.

Fallmerayer looked at the Count's long, yellow, bony face, with
its sharp nose and bright eyes and the thin lips under the drooping
black moustache. The Count was wheeled along the platform like
one of his many pieces of luggage. His wife followed the wheel chair.

As the wife plumps up one of her husband's pillows, Fallmerayer says good night, never to be seen again. For his life, if he were to stay with the Countess, would now mean his own attentive devotion to the old man.

The secret life of Dr. Skovronnek, who in "The Triumph of Beauty" specializes in caring for women at a local spa, is revealed through his incredible story of a friend, a young "upper class" diplomat and a beautiful, but rather stupid English woman, whom the young galant marries. While the story portends to be an objective description of how the young man is tricked by a course woman (she loves Wagner, he plays Mozart with the Doctor), we soon recognize the tale as misanthropic fable about women in general who trick and destroy their innocent husbands. What is clear is that the Doctor himself is enamored of the young man and angry at the wife for coming between them. The final flurry of hatred towards women expresses the Doctor's condition quite clearly:

Many, many women passed me in the street, and some of them smiled
at me.
Go on, I thought, smile, smile, turn, look over your shoulders, swing your
hips, buy yourselves new hats, new stockings, new bits and bobs! Old age
will catch up with you! Give it another little year or two! No surgeon will
be able to do anything about it, no wigmaker. You will be disfigured, em-
bittered, disappointed, you will sink into your graves and then further, into
Hell. But go on, smile, smile!...

The last tale of this marvelous collection, "Leviathan," also is a story of a secret life. In the town of Progrody lives Nissen Piczenik, a renowned coral merchant, a successful Jewish businessman. Secretly, however, corals are not just the source of Piczenik's income, but represent an obsession, a kind of madness that includes all things connected with the ocean. When a local boy who has joined the navy returns for a visit home, Piczenik takes up with him, questioning him about everything to do with ocean waters, for Nizzen has never himself been to sea. So compelled is the coral merchant with the subject that, when the young man must return to his ship, he accompanies him to Odessa, claiming he is the boy's uncle and joining him for a tour of the vessel and staying on in the city for three days.

With his return to Progrody, Piczenik discovers his business is dwindling and, soon after, another coral merchant opens a shop in a nearby town, selling only synthetic corals at great discount. Against all his principles and his love of the objects he sells (which the merchant perceives as living beings) he begins to mix the synthetic with the real. Sales drop even further, and since he cannot sell only the real ones, determines to emigrate. On his way to Canada, the boat sinks, Piczenik leaping overboard to join his real corals.

Interestingly enough, in Roth's early stories absolutely exceptional-seeming individuals were revealed as absolutely ordinary and boring figures. But in the best of these tales the ordinary men and women he portrays, when their surfaces are slightly scratched, are represented as extraordinarily complex individuals, flawed yes, but amazing for their secret passions of life.