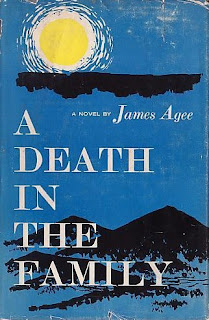 THE SILENT STARS GO BY
by Douglas Messerli

James Agee’s novel A Death in the Family is clearly—as its back cover announces—a moving and poetical work, a book which, upon its publication after Agee’s death in 1955, was edited and published in 1957 by David McDowell. Based on the death of Agee’s own father, the novel was perhaps destined to become an immediate “American Classic”; it won the Pulitzer Prize upon its publication, and has long been an American literary favorite.

In some senses, however, the book—at least in terms of its plot—is nearly uneventful. Protected by the love of his mother Mary and father Jay, his great-aunt Hannah, his uncle Andrew, and numerous other family members, the young boy Rufus is presented as growing up, encountering an ever confusing world around him and his sister Catherine. The only major event of the novel is at the heart of the work, his father Jay’s death in an automobile accident as he hurries home to his family from a visit his own father’s sickbed where he has been summoned by his alcoholic brother, Ralph.

Accordingly—at least in the McDowell version of Agee’s work—the threads of narrative and memory are woven together through the family’s reactions and interactions concerning the event, and in this respect, it is one of the least plot-driven works of modernist American literature.

Add to that fact that the fiction begins with a walk home from the movie theater with father and son saying little to each other, focuses on long periods in which the children are told to simply sit still and be quiet, and ends with another silent walk with Rufus and his uncle Andrew in which the narrator closes, “all the way home they walked in silence”—as if everything, both plot and dialogue, were centered on what Charles Bernstein described to me [concerning an essay in My Year 2007] as the Southern and Midwest sense of “withheldness”—it seems strange that the work gained such popularity.

As much as Americans hate to admit that they are interested in the psychological aspects of their beings, one quickly recognizes that this work’s appeal is nearly entirely psychological. For what this family does and says nearly all relates to how family members and friends perceive themselves and each other and how they think themselves perceived. Of course, the author’s reliance on inner perceptions is a common method of relating childhood experiences; and Agee is a master of demonstrating the illogical logic of childhood perception of adult behavior, one of the most brilliant examples of which lies in the last pages of this book wherein Rufus attempts to understand Andrew’s hateful outburst against his sister’s and aunt’s religiosity:

He was glad he did not like Father Jackson and he wished his mother did
not like him either, but that was not all. …It was when he was talking
about everybody bowing and scraping and hocus-pocus and things like
that, that Rufus began to realize that he was talking not just about Father
Jackson but about all of them and that he hated all of them. He hates
Mother, he said to himself. He really honestly does hate her. Aunt Hannah,
too. He hates them. They don’t hate him at all, they love him, but he hates
them. But he doesn’t hate them, really, he thought. He could remember
how many ways he had shown them how fond he was of both of them, all
kinds of ways…. But he hates them, too.

If Rufus’s oppositions of love and hate are somewhat naïve, they represent a complex notion of family feelings, feelings in which those and other emotions become interwoven into powerfully compelling poles of emotional response.

Time and again in his fiction, Agee reveals the obstinate attempts of young questioning minds to comprehend unfathomable adult realities. But Agee’s psychological approach is just as dominating for the adults of this work; his presentation of Jay’s brother Ralph’s desperate feelings of inadequacy are equally powerful. After a long period of “rage and despair” over his need to leave his father’s sickbed again and again for a drink, Ralph closes this section with these thoughts:

And looking at himself now, he neither despised himself nor felt pity for
himself, nor blamed others for whatever they might feel about him. He
knew that they probably didn’t think the incredibly mean, contemptuous
things of him that he was apt to imagine they did. He knew that he couldn’t
ever really know what they thought, that his extreme quickness to think
that he knew was just another of his dreams. He was sure, though, that
whatever they might think, it couldn’t be very good, because there wasn’t
any very good thing to think of. But he felt that whatever they thought,
they were just, as he was almost never just.

This intense self scrutiny and each character’s complex analysis of each other are made particularly clear in the quiet wisdom of Aunt Hannah. As she determines to buy her great-nephew a hat, Hannah attempts to let the decision of which hat he chooses to be his alone, despite her deep reservations of his choice:

He submitted so painfully conservative a choice, the first time,
that she smelled the fear and hypocrisy behind it, and said carefully,
“That is a very nice, but supposed we look at some more, first.”
She saw the genteel dark serge, with the all but invisible visor, which
she was sure would please Mary most, but she doubted whether she
would speak of it; and once Rufus felt that she really meant not to
interfere, his tastes surprised her. …It was clear to her that his heart
was set on a thunderous fleecy check in jade green, canary yellow,
black and white, which stuck out inches to either side above his ears
and had a great scoop of visor beneath which his face was all but lost.
It was a cap, she reflected, which even a colored sport might think a
little loud, and she was painfully tempted to interfere. Mary would have
conniption fits; Jay wouldn’t mind, but she was afraid for Rufus’s sake
that he would laugh; even the boys in the block, she was afraid, might
easily sneer at it rather than admire it—all the more, she realized sourly,
if they did admire it. It was going to cause no end of trouble, and the
poor child might soon be sorry about it himself. But she was switched
if she was going to boss him!

The pages and pages of Agee’s characters’ inner scrutiny ultimately becomes the subject of his fiction, and we realize eventually that the “death” in this family is not simply represented by the father’s body lying in the open casket near the work’s end, but continues in all of the thousands of small questions, doubts, compromises, and silences each family member endures for their love and hate of one another in order to survive the horror of the darkness they most fear.

The author demonstrates those “daily deaths” most strongly in the opposition in this work between how these men and women face their fears. Seldom has there been such a popular American novel that so clearly represents the polarizing forces of scientific logic and religion. Mary’s father, her brother Andrew, and her own husband all must daily fight her and her Aunt Hannah’s religiosity, and upon Jay’s death, her father warns her strongly not to hide behind her religion as a salve to her husband’s death.

By work’s end, we see even the young Rufus coming through reason to oppose the beliefs of the church, and we can only fear, at fiction’s end—particularly after the children’s terrifying encounter with Father Jackson, a man who refuses to read the complete burial service over their father because Jay had never been baptized—that the children will face repeated battles over Mary’s deeply held faith.

It seems a near miracle, accordingly, that this book has survived on the shelves of what sometimes appears to me to have become an increasingly unthinking and religious society such as ours.

Yet miracles—or at least near miracles—with or without God, occur in A Death in the Family in at least three occasions, transforming its characters in their relationships to the spiritual, cultural, and natural worlds.

The first instance, right after Andrew reports to the family the cause of Jay’s death, is registered by the reactions of several family members, including the skeptical Andrew, who suddenly feel a presence in the house, a sound as if someone were quickly entering like a force determined to protect them and the children; even Mary’s nearly deaf mother “hears” what they are convinced is the father’s spiritual return.

The second miraculous moment occurs during another silent night time walk, as Andrew, his father, and his mother return from Mary’s house to their own home; throughout this scene Andrew inwardly sings the lyrics to “O Little Town of Bethlehem,” which reveal hidden and appropriate meanings of that Christmas song to their current concerns with life and death:

How still we see thee lie
Above thy deep and dreamless sleep, the silent stars go by.

The third instance is Andrew’s description of the father’s burial to Rufus, and as such, is a loving gift to the child:

Right when they began to lower your father into the ground, into
his grave, a cloud came over and there was a shadow just like iron,
and a perfectly magnificent butterfly settled on the—coffin, just
rested there, right over the breast, and stayed there, just barely
making his wings breathe, like a heart.

“If anything ever makes me believe in God,” Andrew admits to Rufus, “It’ll be what happened this afternoon.”

Faith in the midst of doubt, love in the face of hate are the true revelations of Agee’s simply-expressed prose-poem to the memory of his father.