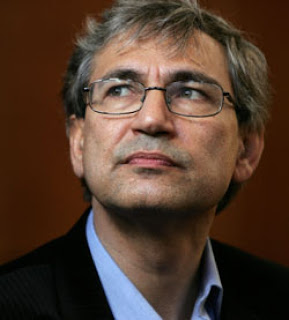 THE SMELL OF DEATH
by Douglas Messerli

Orhan Pamuk My Name Is Red, translated from the Turkish by Erdağ M. Göknar (New York: Alfred A. Knopf, 2001)

Orhan Pamuk's 1998 novel, My Name Is Red, first published in English translation earlier this year, is both a history about art in the Arab world, and a story of a culture's erasing of that very history. Set in late sixteenth and early seventeenth century Turkey, Pamuk's work is also a love story embedded in a mystery. Before the book is over two important Ottoman Court painters are killed, and the murderer decapitated. And at the same time, the spiritual and intellectual struggles behind these events bring an end to the long tradition of miniaturist book illumination, jewels in Islam art.

Pamuk's great gifts of storytelling allows him to write a story that explains and admires the long tradition, while still questioning it. Simultaneously, through the multiple perspectives of his fiction, he reveals both the great love (often homosexual) between the miniaturists and the leaders of the court studios, while exploring the often brutal treatment of the younger miniaturists and their own struggles and plots to outshine one another and win over the adoration of their master.

Further, this complex tapestry of Turkish history is centered in a love story between a "potential" widow, Shekure—her husband has failed to return from the warfront—and a former painter, Black, who has just returned from battle. Black, who for years worked with Shekure's father, Enishte Effendi, has long been in love with Shekure. But her marriage to another, resulting in her two children, has made it difficult for him to express that love.

Traditionally, Shekure would have stayed with her husband's family until her husband's body was found or officially declared dead. In this case, however, Shekure's brother-in-law is determined to marry her, and, confused by that situation, she returns to her father's home.

Earlier in the book, another of the painters, Master Elegant Effendi, has been killed. Now suddenly as Black and Shekure vow their love for one another, Enishte Effendi, Shekure's father, is found dead. Black, we know is innocent. Who among Enishte's group is guilty: Olive, Buttterfly, or Stork?

The couple quickly hold a funeral for Enishte. Finding a preacher who will declare Shekure's husband dead, the two marry soon after. But their troubles have just begun. The former husband's family insists she must return to them, and the authorities, who suspect Black, are determined to torture all the painters until one confesses. In Shekure's house and elsewhere there is an overpowering smell of death.

Joining forces with the great Master Osman, head of the Sultan's studio, Black studies the Sultan's great library of manuscripts in search of a painting style—in this case the flared, open nostrils of a horse—learned by one of the miniaturists at an early point in his studies that reveals the identity of the criminal. What they discover remains vague; in some respects Master Osman cannot truly believe the murderer could be any of his beloved students. Yet what they witness in these books is the entire history of Islamic painting, pictures that, unlike those of Western artists (which the characters refer to as "Frankish influences") utilize stylized scenes and figures based on the earliest of the masters, with only slight shifts in form and line over the thousands of years.
While pondering these great books, Master Osman blinds himself in the tradition of the numerous masters who in their dedication to their art have gone blind. And Black is basically left alone to uncover the culprit.

All of this is made even more complicated by the outcries of several religious groups in the city against the work of the illuminators, and, in particular, against the painters secretly gathered by Enishte Effendi, who himself has seen the Frankish artists and, purportedly, has been influenced by them, which is most evident, so it is believed, in the last missing picture, stolen by the murderer himself.

I have often been accused in these volumes of revealing the entire stories of the books I discuss (their plots are seldom what motivates my reading and love of these works), but, in this one case, I will leave the discovery of that murderer to future readers of My Name Is Red. It hardly matters, moreover. Although Shekure's and Black's marriage survives, the incidents described in this book have brought an end to the miniaturist tradition, at least in Turkey. The Western styles of art have won out against the traditions expressed in these manuscripts. Sultan Ahmet I, who follows the beneficent sultan of this work, is opposed to any artful expression, even destroying a large clock with statuary sent to him by Queen Elizabeth I. The beautifully artful expressions of the Koran and folktales described in Pamuk's fiction are suddenly doomed to be forgotten, some are destroyed.

Even more importantly, a whole way of seeing the world has been altered. The abstractions of the miniaturists have been replaced by self-expression; art in subservience to belief is exchanged for an art that expresses the artist and his subjects.