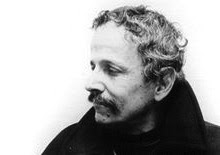 THE THING ITSELF AND NOT
by Douglas Messerli

Yoel Hoffmann's 1999 fiction Lev hu Katmandu, translated this year by Peter Cole, is a fiction consisting of 237 small chapters made up of dream-like imagery, profane observations, and religious iconography somewhat like tiny linguistic equivalents of Chagall's paintings. Many of these almost seem fey in their surreal-like metaphors:

Like the water cow that lowers its head and sees, for a moment, the
murky green, he asks himself:
What else do I have to do? Inquire about something in a shop? Write
to a certain office?

His thighbone is weak, and his left foot will go (he knows) somewhere
else. Chinese ladies holding delicate fans waft a breeze over their faces
and, with gentle voices, ask the foot: Wong Way?
The ears are directed toward the large grasshoppers, standing there
motionless, and the right hand (a sign, as it were, of life) agrees to die
because what...

And after reading twenty or thirty of these short sections one has a sensation of having too many sweet confections, almost as if having consumed that same number of jelly beans.

That is not to say that all of these miniature comments and observations contain only pleasant images. Often, particularly early on in the book, the major character, Yehoahim, sees the world with a kind of vague dismay that accompanies an unacknowledged sorrow.

Now he is thinking:
I had a dog and the dog died.
I had a woman and she went away.

I have seen cadavers. The empty shell of a man, and I have heard the
terrible sound lying beneath the world.

Others of these condensed fictions seem to be almost out of a Fellini film such as Juliet of the Spirits:

Overall, there is such a gentleness in Hoffmann's tone that occasionally one feels that he is reading the book with rose-colored glasses.

Indeed this story of The Heart is Katmandu is a kind of love tale, a story of the "innermost streets" of the heart that wind through the mazes of the mind. Having lost his wife and being lost in his own life, an older man Yehoahim asks a local woman Haifa, Batya for a date, and, despite Batya's Mongolian baby (whose father she refuses to name) and her current boyfriend, Robert, the two quickly fall in love. That love, in turns, lets loose a world of new possibilities and questions, which the fiction ponders in these compressed poetic passages.

To say that Hoffmann's short sections are "compressed," is almost an understatement, for the author (who is also Professor of Eastern Philosophy at the University of Haifa) creates, at his best, black holes of intellectual energy to give voice to his everyday characters. While neither Yehoahim nor Batya are brilliant thinkers, in their imaginations and emotional make-up they encompass both the sensuous world around them and profound revelations:

Yehoahim rises like a foot at half past seven, wraps his body in a bath-
robe, and sits down to write:

Dear Berman,
In your last letter you argued that Quantum Theory involves an
inconceivable logic according to which a thing is both itself and not
itself. Last night I understood that such a logic is in fact quite feasible.

How is the horse you take out of the drawer each morning?

In the end, accordingly, Hoffmann's sometimes sweet poetic passages are anything but simple, for they explore a world in which what things appear to be are in fact just that—and yet are not. By fiction's close what was once a world made up of a lonely man and an unhappy woman with a Mongolian baby, become a family:

...and the baby's name is Jonathan, and Yehoahim receives his name, and
Batya hers, in the way a general pins a medal to the chest of an outstanding
soldier. The caption "this is a family" flashes across the ceiling, as though
being drawn by a small airplane. Everything has its name, and the name has
one as well.

The untold story has at last been revealed.