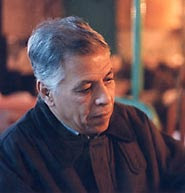 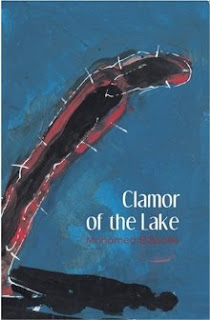 THE VOICE IN THE CHEST
by Douglas Messerli

Mohammed El-Bisatie Sakhab Al-Buhaira (Cairo: Dar Sharqiyat, 1994).
Mohammed El-Bisatie Clamor of the Lake, translated by Hala Halim (Cairo: The American University in Cairo Press, 2004) [This review was based on a manuscript version of the English translation.]

Three stories—parts of which are interlinking—make up this short Egyptian novel, in which the real subject is the lake itself and the life it supports. The first tale is of an old, silent fisherman who visits a small village where nearby lives a woman with her two boys. Gradually, the fisherman befriends them, and the woman relates her tale of marriage, abuse, and abandonment, despite the strange protection she received during the birth of her children from the husband’s family members.
The second tale, by far the most engaging and mystifying, centers on a woman who combs the shore in gale-force winds of storms to discover objects thrown up by the waters of the lake. She and her husband Gomaa sell some of the objects while keeping others as prized possessions: a sword, a talisman, a gun, etc. She discovers, in her searches, a chest which, when a button is pushed, speaks in a language no one comprehends. Gomaa is both fascinated and frightened by the voice in the chest and what it portends, and soon devotes his life to understanding its message. We’re never told what he learns in his studies. Perhaps he recognizes that the voice is the lake’s clamor of the book’s title; perhaps he comes to perceive the untranslatable message as a metaphor of his own inexpressible longings. One day he vanishes with the chest, returning years later to die.

The third story involves the strange, uncivilized lake-dwellers who enter the village during the storms and dart from building to building, looting businesses, two with particular furor. The owners of these businesses—Karawia, the café proprietor, and Afifi, the grocer—have grown up next to one another, and now join forces to stem these seasonal attacks. Their first attempt to travel to the home of the lake-dwellers, however, ends in frustration and in a year of enmity between them. When they are next attacked during a storm, they again join forces, this time searching out and discovering the village of the lake-dwellers, presenting the with gifts of halvah and a goat. The adventure further bonds them and they become closer friends, revealing their lives to one another. Their intimacy, however, like most of the relationships in this fiction, is buried in mystery. Like Gomaa, they too suddenly disappear. Years later, after another heavy storm, their corpses are found upon the shore.

Episodic in form, yet bound together structurally by the ongoing patterns of nature and human endeavor which define the “clamor of the lake,” this short work is a powerful and moving fiction.