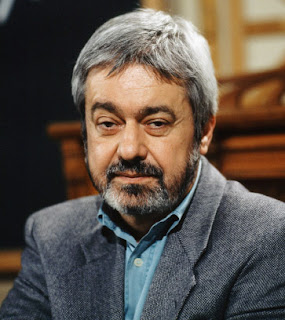 Jurek Becker's first two award-winning novels, Jakob der Lügner and Irreführung der Behöden were highly successful. His latest work, Der Boxer, is the fascinating account of one man's ill-fated struggle to come to terms with his past.

The fictional story of Aron Blank, a Jew who survived ghetto and concentration camp, is recorded in fictional interviews with a fictional chronicler. Ironically, it is precisely this contrived set of circumstances which ultimately lends credibility to Becker's novel. Italicized words and phrases in the chronicle appear to represent Aron's own choice of language. Verbal exchanges between Aron and the writer regularly disrupts and yet complement the narrative. Aron's stated purpose is erzählen (to narrative), not erklären (to interpret or explain), and the reader learns a great deal about Aron's character from these interspersed conversations. At one point, for example, Aron advises the chronicler that his story cannot be presented objectively and that he should go and describe a soccer match, if objectivity is what he is after. Aron is not presenting a history of the postwar years, he insists, but rather his story. There are times when Aron is reluctant to continue with the project, and in one instance progress is halted for six months because Aron has suffered a near-fatal heart attack.

At another point the writer calls off the session because he is not in a working mood; he even considers burning his notes. This method of presentation is nothing completely new, particularly in DDR fiction, but it works especially well for Becker, obviously giving him an unusual degree of latitude and freedom in unfolding his narrative. Aron emerges as a man bonded to his principles, hesitatingly accepting a job as bookkeeper for a black-market racket and, later, as interpreter for the Russians. Relationships inevitably dissolve. The various subplots, involving Linda London, Paula Seltzer, Alois Weber, Kenick, Tenebaum, Ostwald and others, ultimately form a constellation circling around the nucleus of Aron's story: his search for and subsequent acceptance of his lost son Mark. In an attempt to create a model for the child, Aron invents the boxer.

As Mark grows up, the two men grow apart. Mark, who may or may not actually be Aron's son, emigrates to Israel, where, presumably, he is killed in the Six-Day War. Becker's sweeping chronicle lacks the grandeur and the grotesque imagery of Grass's Blechtrömmel. His record of a family's disintegration does not have the generational scope of Mann's Buddenbrooks. And yet his novel presents a complex and engrossing account of man's exhaustion from his inability to cope with history, an account which, universally, reflects the fate of millions. Der Boxer is an immensely readable book that is destined to establish Jurek Becker as one of the most gifted novelists writing in the German language today. [Klaus Phillips, World Literature Today]
Posted by greenintegerblog at 11:22 AM