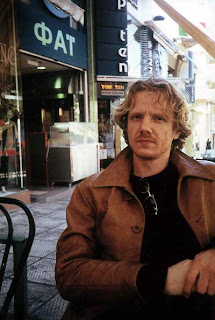 Bjarni Bjarnason is no doubt one of the most remarkable of Icelandic authors of his generation, and his two novels, Endurkoma Maríu (Mary's Return) and this book (The City Behind the Words) have won much acclaim. Borgin bak við orðin is a sophisticated and extraordinary piece of work, in which stories of a peculiar kingdom are skillfully interwoven with tales of an unknown city.

The protagonist is the young boy Immanúel Merkúríus, the son of King Salómon, founder and regent of a curious land with curious customs and rituals and a devotee of silence. As Immanúel points out: "My father says that when we manage to create the original material, we can turn stones into gold. His main advisor, the blind seer, whom no one may meet except him, claims that prima materia, the original material, is silence. The silence which prevailed before the world came into existence....My father says that language is the landscape of the soul, and that the first land disappeared when the first language was lost.

But if a child born of royal stock is placed at birth in the original silence, it will in time speak the first language of the world, God's language. He says that people need not hear more than a single word of this heavenly language...and then the language will automatically awaken in the mind of the listener, who at the same time will forget all other languages...Only one word, and the world will take on the right form." (Readers may recognize here pronounced Augustinian themes, particularly from On Christian Doctrine and The City of God.) For venturing outside his father's valley, however, Immanúel is destined to abandon his little sister, who at birth was placed in the original silence and entrusted to his care, and to live in the streets of an unkown city, where he makes a living telling stories about his father's kingdom "until," as he says, "my soul became fiction."

Having eventually been "civilized" by one of his enthusiastic listeners, Mrjam Baldvin, a publisher, who requests that he commit his stories to writing, Immanúel happens to see his own reflection in the mirror of the city's hotel where he is now staying and recognizes his reflection as the robot he had encountered while living in the streets. Immanúel's stories combine the naïveté of a child with the wisdom of an adult in a type of lyrical prose that reaches heights of great beauty. Immanúel raises many important, profound, and relevant issues with his audience, the readers, and provides them with, if not truth, then fiction of almost divine inspiration. [Kirsten Wolf, World Literature Today]
Posted by greenintegerblog at 11:10 AM