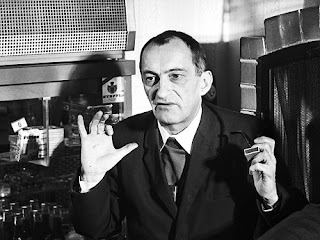 With each new short story that Herbert Eisenreich writes, he assures that his name will remain a dominant one in contemporary German literature. Following in the creative tradition established by his friend and mentor Heimito von Doderer, Eisenreich presents the reader with a multifarious fictional world: he is a superb storyteller, he is a profound thinker, he is a genious in his use of language.

Three titles—of the twenty-two short stories in this volume—portray the essence of Eisenreich's writings. The title "Die blaue Distel der Romantik" is representative of a general attitude that pervades many stories. Eisenreich may superficially appear to be a great conservative traditionalist, but under close scrutiny it is clear that he is an irreverent Lausbub. The old and well-known are examined with such a subtle intensity that the reader hardly realizes that a totally new and radically modern view is being expressed. The cherished "blue flower" is transformed into the "thistle," and the reader is forced to pay attention to this prickly plant. "Ein Bild von Mann und Frau" is descriptive of Eisenreich's major concern as a writer. He has admitted that practically everything he writes deals with the problems that arise from the relationship of one person to another and the normal confusion caused by the natural misunderstanding among two people.

Eisenreich develops all possible consequences of confusion and concludes that these misunderstandings are the normal result of the general imperfection of life. The third story, "Zwischen den Zeilen," serves as an example of Eisenreich's reflecting on his role as a writer. By reminiscing, he suggests that certain events should be written about. However, there are many other events that are inferred, since their total significance may be unclear to the writer or the reader. In an earlier volume of stories Eisenreich prefaces his work with a statement by Heimito von Doderer: "We never have a direct effort on anything and we don't effect that which we really intend to." But Eisenreich, like Doderer, does not permit this to discourage him; on the contrary, he finds his greatest strength as a writer when he writes between the lines. [Thomas H. Falk, World Literature Today]
Posted by Douglas Messerli at 10:41 AM