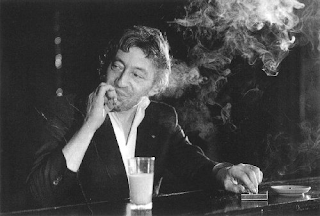 Literally artsy-fartsy, Evguénie Sokolov is a satirical, allegorical rise-and-fall story about a dyspeptic, marginal young man who becomes a famous painter via his lusty flatulence.

This pseudo-autobiography is at once an ode to anality and a sly rendering of happenstance in the creative process. It's also a play on Serge Gainsbourg's life history: in the '60s and '70s, he deliberately flouted Europe's conventions and—despite or because of his overindulgent rebel pose—farted his way to the top of the carts as one of France's most controversial and admired pop stars. As the introduction conveys, her performed his own songs in a raspy, strung-out voice and in duets with the likes of Brigitte Bardot. In the most infamous of these, the 1967 "Je t'aime—moi non plus" (I Love You—Me Neither), he croons "Je vais et je viens entre tes reins" ("I go and I come between your kidneys").

Gainsbourg's mock/real lyricism resonates throughout the novel. In passages reminiscent of Proust's madeleine riffs, Sokolov rhapsodizes on his inspired, foul emanations: "I would escape on my own to Nordic sand dunes and [stand] there, shivering in the twilight gusts...the wind would carry off my exaltations and disperse the diabolical...wisps in fascinating, enchanted swirls." For Sokolov, the fart serves as both revenge and display, the source of the narrator's humiliation as well as his brilliance. ...The tale is clever and moving. the narrator contradicts himself without apology, at times veering from first into third-person point of view, referring to himself by name as though he were in the position of his buyers or critics. Gainsbourg's snipes at art-world notoriety produce a Seinfeldian, box-with-a-box counterreality. His novel is intellectually provocative, but also deeply and sensually—aromatically—felt. [Perry Friedman, Rain Taxi]
Posted by greenintegerblog at 8:02 AM