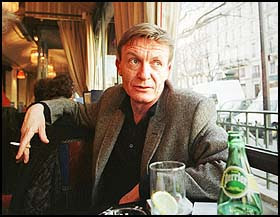 The winner of several prestigious literary prizes, and one of France's foremost contemporary writers, Jean Echenoz is best known for his tongue-in-cheek humor and his parodies of pop culture. Big Blondes is a quintessential Echenoz novel, exploiting the comic potential of detective writing, comic-book characters, and Hitchcock thrillers (especially Vertigo) in a hilarious plot based on the stereotypes and clichés associated with blondes.

As Paul Salvador, a television producer preparing a series of documentaries on blondes, sets out to track down the elusive Gloire Abgrall (alias Gloire Stella), a former pop singer who disappeared after the suspicious death of her agent, he and his detectives become involved in a fast-paced chase around the world. Their pursuit takes them from Brittany to Australia and India, then back to France, and embroils them in the shady operations of an international drug-trafficking ring.

At the center of the cast of oddball characters—with transparently symbolic names—is Gloire herself, whose penchant for pushing her enemies off high places—cliffs, bridges, elevator shafts, balconies and the Ruen cathedral—is tempered by Béliard, a homunculus and kind of alter ego whose magical powers make him a cross between a guardian angel and a miniature superman. Mark Polizzotti's fine translation does an excellent job of capturing Echenoz's hallmark style; his clever wordplay, unexpected turns of phrase, and idiosyncratic humor.

In short, Big Blondes is a must for anyone with a taste for zany thrillers that combine social satire and love stories with a good does of farce. [Susan Ireland, The Review of Contemporary Fiction].
Posted by Douglas Messerli at 10:35 AM