Review of Lem's The Investigation, by Tom J. Lewis 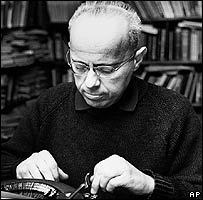 ...In The Investigation Lem toys with the conventions of the detective genre. We expect a crime—murder—but instead what we confront is the inexplicable movement of recently deceased corpses, none of which has been murdered. The mystery of who would do this, why, and how becomes the subject of investigation by Scotland Yard. The detective in charge, after employing all his sleuthful resources with nor result, turns his frustration and suspicions upon a statistician who had brilliantly analyzed various aspects of the case: the detective accuses the statistician of having transported the corpses, but he fails to convince his supervisor of the validity of his accusations. In the end no rational explanation can be found for the events that constitute the novel's "crime." Readers are left with no clear conclusion except that the tradition, conventional methods of investigation have failed. This failure suggests that the events constituting the crime may have their cause and origin in either the miraculous or the unearthly. With this failure and the suggestion it creates, Lem manages to bring his detective fiction to the verge of science fiction. A detective's task is to discover from what is known (the evidence of the crime) that which is unknown (the identity of the criminal), the assumption being that the unknown can be reached by way of the known, that the unknown is knowable. In producing a piece of detective fiction in which the unknown cannot be reached by way of what is known, Lem challenges not only the conventions of a literary genre but basic assumptions held by all researchers, investigators, and scientists; and he does so in a manner that is intellectually stimulating and very entertaining.... [Tom J. Lewis, World Literature Today]
Posted by Douglas Messerli at 8:27 AM