Review of Martín Gaite's Behind the Curtains, by Brooke K. Horvath 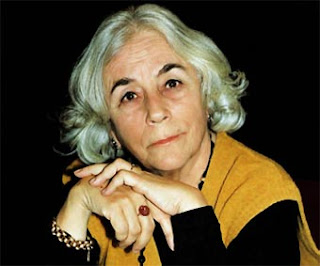 …Behind the Curtains casts a cold eye on women’s chances for happiness and self-fulfillment, matrimonial and otherwise, here within the stiffling confines of a provincial Spanish town during the 1950s. Recipient in 1957 of Spain’s most prestigious literary award, the Nadal Prize, Martín Gaite’s novel relates the interconnected stories of several young women, among them Gertru, a girl who has dropped out of high school to marry a mistake; her friend Tali, who dreams of going to college and who finds the parties and dances enjoined upon her both boring and modestly nightmarish; Tali’s older sisters Julia and Mercedes, who like their friends Isabel and Goyita are thoroughly conventional women desirous of nothing beyond securing a husband before their thirtieth birthday; Elvira, a talented woman who flirts with unconventionality before surrendering to the safety of the expected; and Rosa, whose career as a nightclub singer leaves her an attractive bit of gossip but beyond the pale of good society.

Complementing (and endlessly complimenting) this cast are no end of men—a barroom full of cads, dullards and prize catches enlivened only by the presence of Pablo, a high-school teacher newly arrived in town whose refusal to play the game alternatively charms and dismays. In 280 effortlessly readable and enjoyable pages—narrated from a variety of first- and third-person points of view—Martín Gaite evokes the claustrophobic intimacy of a small-town social world wherein everyone keeps tabs on everyone else while doggedly pursuing any number of vapid amusements calculated simultaneously to secure a marriage partner and to pass the time until that ne plus ultra is attained. The publicity release accompanying my copy of Behind the Curtains speaks of the political parallels to Franco’s Spain these young women’s lives suggest. Such parallels are doubtless there to be found, but they are notably unobtrusive, as, indeed, is the author’s feminism. But then there is no need in Martín Gaite’s novel for speechifying: her carefully realistic depictions of incipient affairs, of insipid, muffled lives, and her ability to capture flirtatious banter and private anguish say it all. In fact, what should prove most arresting for American readers is how clear a self-reflection many will discover in this story of provincial Spain. [Brooke K. Horvath, The Review of Contemporary Fiction]
Posted by Douglas Messerli at 10:23 AM