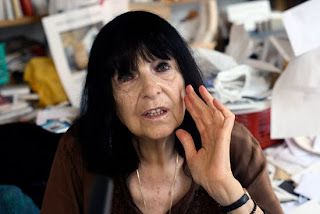 The two terms of the title, brütt and die seufzenden Gärten, signify the contradictory aspects of love, according the author: the former referring to its brutality and pain, the latter to tenderness and surrender. For although Friederike Mayröcker has a reputation as an experimental writer who would never dream of providing a coherent narrative line, this current "novel" is being billed as a "love story."

Her avant-garde following need not become alarmed, however, for this is certainly no conventional "love story" and there is no need to fear that she might have lapsed into sentimentality ("the sighing gardens"!) or any semblance of a plot. Beginning with the statement "Ich erlebe nun eine Liebesgeschichte: meine letzte' muß es heißen" (I'm now experiencing a love story: my last one, it should be said), everything is fragmented and relativized by the author. Rather than a love story in any traditional sense, Mayröcker's novel is an extended meditation on the effect of love on a middle-aged, avant-garde writer: what does it do to how she perceives the world, how she articulates her pain and surrender, her sense of narrative and language?

It is never really clear if "Joseph," the putative object of her affections, is actually a figment of the narrator's imagination, providing her with an incentive to write "eine Art Tagebuch" (a form of diary) of this affair and its aftermath. In a series of dated entries, she records details of her experience in love along with a running commentary on the effect of her longing on her writing and her subjectivity. The "diary," written in the first person, begins on 9 Septebmer and covers the period until 4 July of the following year. The entries consist of the narrator's thoughts and observations on the topics of love, life, aging, literature, philosophy, esthetics, art, music; wordplays; fantastic sequences; recurring phrases and passages used like a theme and variations in music; and word-collages in Mayröcker's ironic, distanced, idiosyncratic prose, punctuation (:/!), and typesetting style.... The main questions for the unintiated reader may be, perhaps: who is the object of this love story.

Is it Joseph, one of a series of formulaic male ciphers including "X. (oder Wilhelm oder Ferdinand)," who recur throughout the text? Or is it "Blum," the one constant partner in the narrator's life, with whom she "converses" in each entry and who seems to understand her broad-ranging interests and to appreaciate her style. "Blum" is the other component of the dialogic principle governing the process of the narrator's writing: "sage ich zu Blum," "sagt Blum," "Blum fragt mich," "antworte ich Blum." Although "Joseph" seems to be the cause of her suffering, and although she speaks directly to him at times, he leads her into the temptation of "narrative" banality; "Blum," however, serves as her esthetic conscience, helping her "1 GANZ BESTIMMTE SCHREIB-HALTUNG BEIBEHALTEN ZU KOENNEN, usw" (to be able to maintain 1 very definite style of writing, etc.).

If you are a fan of Mayröcker already, or if you delight in non-narrative verbal pyrotechnics pushing the limits of language, this is the "love story" for you. It's brilliant in its use of and discourse on language. If, however, you are the type of reader looking for a coherent plot, passion, or romance in any traditional sense—sigh!—you are in for a rude (brütt?) awakening. [Susan Cocalis, World Literature Today]
Posted by greenintegerblog at 11:15 AM