Phillip Landon | Review of Pessoa's The Book of Disquiet 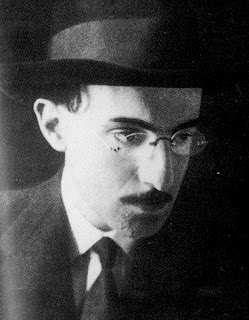 This [Exact Change edition] is a reprint of Alfred Mac Adam's superb English-language rendition of the major prose work by the Portuguese modernist Fernando Pessoa (1888-1935). Discovered posthumously in a chaotic trunk in the author's apartment in Lisbon, Livro do deassossego was first published in Portugal in 1982. It is now one of the undisputed classics of twentieth-century literature. Bilingual in English and Portuguese and powerfully addicted to feelings of nostalgia, estrangement, and exile, Pessoa stands beside Conrad, Nabokov, and Beckett as a writer who used his position as an imaginative outsider to reinvent literary form.

Pessoa's particular contribution is to explore new levels of self-consciousness by facing and indeed cultivating "the ill-being that comes from feeling the futility of life." He is a connoisseur of ennui in all its permutations. His narrator, Bernardo Soares, attributes twentieth-century disquietudes to the loss of faith, not just in religion, but in the hopeful doctrines that replaced it, including social equality, aestheticism, science, and philosophy: "We lost all that; we were born orphans of all those consolations." Infinite longing and finite answers—these are Pessoa's parameters.

He contemplates a secular universe with mystical intensity, and achieves a wholly modern, revitalized sense of the self as endlessly elusive and yearning. He recoils, with Beckett, from closure and plot, and subjects himself to a fearful austerity, embodied in the very from of his deliberately open-ended book of fragments. Like Pessoa's radically innovative multipersonal poetry, this uniquely ambitious novel makes an essential and illuminating contribution to twentieth-century tradition. It sheds a particular light on modernist, decadent, and absurdist literature. As Mac Adam rightly contends in his introduction, "The Book of Disquiet is a literary phenomenon of such magnitude that it must be known." [Phillip Landon, The Review of Contemporary Fiction]
Posted by greenintegerblog at 10:55 AM