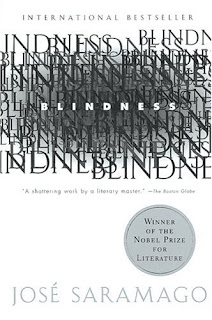 From Sophocles' Oedipus the King to Beckett's Endgame, writers have used the figure of the blind man to dramatize the vulnerability of the individual buffeted by the forces of existence. The stress has usually fallen on the cosmic alienation felt by a social outcast or an everyman figure. Blindness, a novel by the Portuguese Nobel-laureate José Saramago, extends and challenges this tradition.

A sense of estrangement is integral to Blindness, as it was to The Book of Disquiet, a seminal novel by the great Portuguese modernist Fernando Pessoa, Saramago's major literary forebear. However, Saramago's own brand of self-reflexive fiction turns away from the quicksands of philosophical despair and affirms instead the redeeming structures of civilization. A pandemic of blindness engulfs an unnamed society. As chaos descends, the sightless victims are forced to recognize how splendid and precarious is the everyday world, with its inherited social arrangements, which—Saramago suggests—it is our privilege and duty to sustain.

Blindness gauges our prospects in a post-Darwinian, secular world in an age of moral and ecological crisis: "The only miracle we can perform is to go on living, said the woman, to preserve the fragility of life from day to day, as if it were blind and did not know where to go, and perhaps it is like that, perhaps it really doesn’t not know, it placed itself in our hands, after giving us intelligence, and this is what we have made of it." José Saramago has written a parable for the millennium. He employs the universal, Sophoclean idiom with complete authority: "Do you want me to tell you what I think, Yes, do, I don't think we did go blind, I think we are blind, Blind but seeing, Blind people who can see, but do not see." [Philip Landon, The Review of Contemporary Fiction]
Posted by greenintegerblog at 10:44 AM