Review of Saramago's History of the Siege of Lisbon, by Mary Sarko 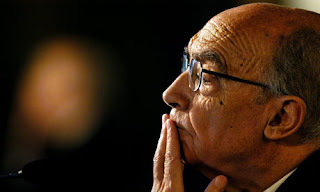 ...Raimundo Benvindo Silva, who is given the job of proofreading a contemporary history of the 1147 siege of the Moorish city of Lissibona by the king of the budding nation of Portugal, is at the center of this book. Breaking with the rules of his profession, he inserts a "not" in the text at the crucial place, and thereby, in theory, changes history.

When Raimundo's subversive act is discovered by the publishing house he works for, he is of course chastised; but when the new chief editor, Dr. Maria Sarah, gives him the only remaining copy in which his alteration has not been corrected by an erratum, she suggests to him that he write a new history that keeps his now infamous "not" intact. As Raimund embarks on this project, he also begins a love affair with Maria Sarah. Writing and desire become intertwined as the new history is written, as do writing and amending. Saramago, who has worked as a literary editor, takes the reader through the painstaking process that leads Raimund to amend the historical manuscript he has been asked to edit. Raimundo checks for historical anachronisms and the use of accurate terminology, but more importantly, he evaluates the primary sources on which the history had been based. For example, the historical text stated that when it came time for the siege of Lissibona, the crusaders who were traveling through assisted the Portuguese king. Raimundo changes the text to say to crusaders did "not" help the Portuguese, because he thought it problematic that the king had not offered the crusaders any booty from the siege; this led him to conclude that the speech read like a sermon, like the words of a senior ecclesiastic rather than those of a king. As Raimundo evaluates the historical text..., it becomes clear that the primary sources are anything but primary.

They too are the product of interpreters and transcribers who are influenced by their own psychological and philosophical vagaries. Raimundo also feels that the "primary sources" and "objective histories" lack verisimilitude. As he proofreads and then rewrites the history of the siege, he fills in what he considers as to be gaps.... This imaginative reflection on the history of the siege takes Raimundo back to the time when "history was life." Raimundo's return to the period of the siege is at times comical...But these reflections on the siege also serve to demystify war and its rationalizations. The Christians are not heroes, but barbarians who cut off heads and raped women and laughed about it.

Lofty religious rhetoric from both Christians and Moors is juxtaposed with acts of brutality committed in the name of a higher cause. The narrator refuses to accept that rhetoric, saying, "it is always the same, we blame the gods for this and that, when it is we who invent and fabricate everything, including absolution for these and other crimes." ...As Raimundo amends the history of the siege, he realizes he will only be allowed one act of creative anarchy. Lisbon is no longer a Moorish city, and he cannot change that. Raimundo's narrative ends with the beheading of the muezzin, the blind man who calls the Moorish citizens to prayer every day. As Raimundo describes it, he died in real fear, but he was killed by a crusader motivated by imaginary fear. For Saramago, as for Frederic Jameson, history is that which hurts. But because he is so willing to open history to many retellings and fill in the lacunae of history, Saramago offers a type of hope.... [Mary Sarko, Rain Taxi]
Posted by greenintegerblog at 8:13 AM