Review of Volodine's Naming the Jungle, by Jack Byrne 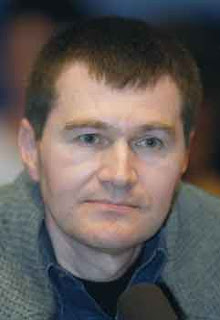 The rain forest of Antoine Volodine's Naming the Jungle is a far cry from Longfellow's "forest primeval"; nor does it resemble Tarzan's vines and waterways, or Rima's green mansions. Rather, it is all phantasmagoria, hallucination, with rotting flora and fauna, huge bats, crocodiles twenty feet long, tarantulas as big as your fist, waterways muddy, shallow, and undefined. This is the world of indigenous Indian tribes who have been involved in civil war for years. The capital city of Volodine's unnamed country, Puesto Libertad, "could be any Latin American city torn by the strife of civil war." The very first sentence plunges the reader into this South American "heart of darkness." "Once again the revolutions was dead." Once again, winners and losers. One of the losers, Fabian Golpiez, feigns madness to avoid interrogation and torture by the secret police. The form of his rehabilitation requires that he consult regularly with Dr. Fabian Gonçalves, a psychiatrist/shaman who is, like Golpiez, a Jucapira or Tupi Indian. His sessions take place in a dilapidated office, formerly used by an executed dentist who left behind a dental chair which now functions as a Freudian couch. With the aid of an old slide projector and a plentiful supply of pictures from the past, Gonçalves involves Golpiez in a talking cure reminiscent of Pinget's inquisitive interviewer in The Inquisitory: "Tell me something concrete instead of of whining, he said. Instead of wallowing in stupid abstractions. You know perfectly well that death has no reality for us. Primeval inexistence, yes. Mud, yes. But not death." After a number of such sessions, Golpiez feels himself "slipping back into my true nature...I was becoming an Indian again." "Becoming an Indian again" requires that he remember or learn all of the Indian terms for the world of the jungle. The ending has many of the elements of magic realism; Golpiez, Gonçalves, Manda (an Indian woman) and Rui Gutiérrez, another Indian, set out for the headwaters of the Abacau to "establish Juaupes, an egalitarian commune governed by a shamanistic and revolutionary administration, and to set up a clinic for the surviving Cocambos and Jaboanas in the area." Manda dies from poison darts fired by local Indians, Rui dies jabbering about equality to an audience of large spiders, Golpiez drifts into the upriver maze of channels, and Gonçalves drifts back to the environs of Peusto Libertad. The ending, like Golpiez's quest for his identity, is buried somewhere in the jungle, along with the Indian nomenclature for every creature, every object. As Gonçalves had put it earlier to Golpiez: "Give us something more substantial.....You're just spinning out your old traumas! There's no plot, no structure to your stories!" Yet there is method in Volodine's jungle madness—an alternative picture of life in the rain forest. [Jack Byrne, The Review of Contemporary Fiction]
Posted by greenintegerblog at 8:59 AM