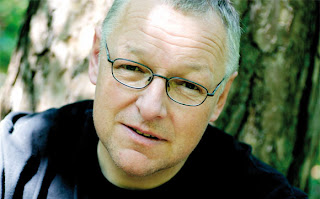 
After you’ve made a hole in the wall with your head,
what are you going to do in the next cell?
-S. J. Lee

That fall I was to install a new window in an older house. I removed the old one and stood in the middle of a strange living room and stared out through the opening in the wall. Far away I saw a man coming towards me through the wheat field. The heads on the gain reached his waist. His face was hidden in the shadow of his hat brim. It was still and hazy.

During the night it rained in through the opening, and the carpet and the floor got damp. The house had become vulnerable.

Then the old woman I was working for died suddenly. Before I could put in the new window. And since there was no longer any need for my services, I came by one day just to pick up my tools. I packed them up and went through the field, where the stranger had walked, down to the boat which lay tied up in the willow thicket by the shore.

Out in the middle of the black lake I put up the oars and looked up at the house for the last time. The field, the maple trees, the little red house, and the hill behind it in fall colors. I saw a pair of ducks glide down into the next bay.

Several days passed without thinking about the woman and the house. But they must have been in the back of my mind all the same, because I couldn’t seem to concentrate very well on my new job. So one morning I decided to go back. A gray oppressive day.

The boat lay where I had tied it. It was half full of rain water, and withered leaves floated between the ribs. It was my boat now.

By the time I reached the field I knew that someone had been in the house in the meantime. The doors were locked, but I got in through the opening in the wall. Without investigating I got out my tools and materials and set to work.

After a couple of hours the new window was in place. It was larger than the old one, and as clear as water. It captured the entire field, the old summer barn and the alder trees in the swamp below.

I cleaned up after myself in the living room and went to the kitchen to put the coffee on. Suddenly a strange feeling came over me: someone had been there and taken away the potted plants. And in the bedroom the flower pots were stacked up neatly one inside the other.

The key was in the lock on the inside of the kitchen door. I went out and walked around the house. All the flowers lay on the compost heap. Fortunately, most of them were still alive. I carefully picked them up, carried them into the house, and put them where they belonged, in their respective pots. Then I watered them.

I poured a cup of coffee, sat down in an easy chair in front of the window and began to wait for the man in the field. Wherever there’s a woman there ought to be a man. A thick mist hung over the fields, and the sky was just as gray as before.

When it began to get chilly I lit the stove. The smell of birch wood has a calming effect. The thought of being becalmed is a pleasant one, and I watched the smoke float straight up from the chimney. It was my house now.

But I missed the woman and went to look for her. On the wall in the living room, just above an oval plant, hung a wedding picture. The young man could be the man in the field. The woman was the woman.

In a dresser drawer lay some cheap jewelry. Bracelets. Earrings. Necklaces, Several of the pearls were yellowed, the gilding flaking off, and here and there a stone was missing. Everything tossed into the drawer at random. I gathered it all up and lay it in a jewelry box which was decorated with colored shells. An old jewelry box. Some of the shells were broken.

In the next drawer I found a photo album bound in leather. It contained strangers from an unfamiliar time. Children, grandchildren, relatives, friends? Mostly children, but also a little farm work and a few trips.

I looked so long and hard at the pictures that I learned all about the fates they held. I got to know each individual’s story. Everyday stories. Routines. A season. A few important events and some tragedies, all emerging from the features and the thoughts in the different faces. Eyes that looked at me and spoke. These people who had lived; maybe they were still alive. And their gazes obliterated the time which had passed between them and me. We spoke of the same things.

When I put the album down, it had begun to get dark.

In the little yellow room stood some cheap and poorly-made knickknacks. Sloppily painted figurines. Keepsakes from the fumbling beginnings of a period of prosperity. A teak barometer which didn’t work. Small copper trinkets. Ashtrays with pictures of exotic landscapes. Pewter, black and pink plastic. In every nook and cranny. Small crocheted cloths. Embroideries of a wood grouse, a cabin by a turquoise lake, a man by a flaming red bonfire. A wooden fish for hanging towels on. A bowl with a half-obliterated place name in the bottom. A dusty bouquet of plastic flowers. A wall clock that was still ticking.

I went around to every stick of furniture, from one shelf to the next, looked at every little object, picked them all up in my hands and held them, studied them and wove them into my image of the woman. I overlooked nothing.

On a little brass saucer I found a key. The key to the wall clock. I dragged out a chair, climbed up and opened the clock. It was very old. The key fit into the hole and I would it up. I felt I was doing life itself a favor by not letting it stop.

A cupboard in the hall was full of Christmas presents, collected over the years. Some of them could have been more than ten years old. They had all been opened, but the Christmas paper had been painstakingly wrapped back around them. Undoubtedly she had just glanced at what they contained, and then put them away, as remembrances or because she didn’t have and need for them. There were four sets of salt and pepper shakers, all of them lying untouched in their boxes. Three sugar tongs, two of them identical. Four sets of teaspoons. The same number of knives and forks. Some plates. A vase which was neither pretty nor ugly. Two egg warmers. A little lamp with a red light. Unused objects, and none of them intimate or personal, just some small obligations in oblivion.

I didn’t see any books in the house. And no magazines. But there was a radio and an old television set with antenna wires fastened to the wall.

In the bedroom stood sacks, cartons, chests and crates stacked one on top of the other. They contained everything from clothing and kitchen tools to coal, wood and potatoes. With her bad legs she had to have everything within reach.

I looked at her clothes, at the cups and plates she had in her kitchen cupboards. I saw how she washed dishes, how her hands grasped a stick of wood and put it in the stove. I looked at the pictures on the walls, at where everything was kept. Household chores. A green fleck in the sink. A shawl on the back of a chair. I looked t her habits, her days and her life.

In the living room stood a well-used piano. A similarly well-used hymn book lay on the bench. The house held as many dreams and hours of loneliness as the piano did melodies. I sat down and played a bit. Accompanying the old woman’s dream of eternal life. There was a faint tinkling between the walls and I heard her gentle voice:

Then we sat down, each in our chair in front of the new window. It was evening and we didn’t turn on the lights. We held hands and waited from the man in the field. After a little while we saw him coming towards us, far away. The heads of grain reached his waist. His face was hidden in the shadow of his hat brim. I felt her hand tremble faintly.

Then I stood up, kissed her gently on the cheek and left. The boat lay tied up in the willow thicket by the shore. Out in the middle of the black lake I put up my oars and looked up at the house for the last time.

_____
Roy Jacobsen (born 26 December 1954) is a Norwegian novelist and short-story writer. Born in Oslo, he made his publishing début in 1982 with the short-story collection Fangeliv (Prison Life), which won Tarjei Vesaas' debutantpris. He is winner of the prestigious Norwegian Critics Prize for Literature and two of his novels have been nominated for the Nordic Council's Literature Prize: Seierherrene (The Conquerors) in 1991 and Frost in 2004. The Burnt-Out Town of Miracles was published in Britain in 2008. Jacobsen lives in Oslo.
Posted by greenintegerblog at 11:59 AM