the dreamer and his critic

Fradique Mendes, originally conceived as a Pessoa-like heteronym, was created by the great Portuguese writer Eça de Queirós and two friends in 1869 in a newspaper, poking fun at their fellow countrymen. The poet, Carlos Fradique Mendes, wrote poems in a kind of satanic Baudelaire manner, which for the great author was a affectation of many younger Portuguese poets whom Eça felt needed to be satirized. 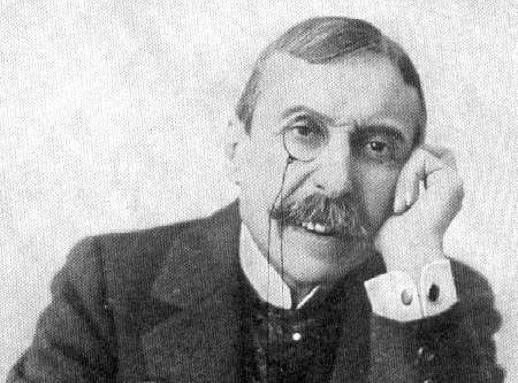 The figure and his writing so engaged him, however, that he continued to write through the pseudonym from 1888 onward, revising the work into a comical biography and collection of letters published in 1900, the year of Eça's death. In many respects this work cannot be separated from his great fiction, published in 1901, The City and the Mountains. Both works swing between two extremes, between a kind of dandyish figure living in the center of Portuguese culture and a more retiring version of the same figure, returning to the quiet isolation and nostalgic innocence of a previous time. In the later book, Jacinto begins as a believer in change, embracing the most progressive developments of the late 19th and early 20th centuries, a man who, when that world falls apart, retreats to his home in the mountains, where he rediscovers the quietude and order of an agricultural tradition.
So too does Fradique Mendes begin by being a man of the world, living in France and traveling to exciting exotic locales such as Arab countries and Brazil. Yet, like Jacinto, Fradique Mendes, whose great love fails him, gradually reverts to more conservative-based realities, often scolding his co responders for their desire to become involved in urban life and their lack of religious values. Fradique Mendes finally "disappears," traveling, as it describes it "on a very long and distant journey," which, he declares, is no longer out of curiosity, "for there are no longer curiosities left, but to put an end in a most worthy and beautiful way to a relationship like ours."
The letters of this fiction, are fascinating for their swings between worldly knowledge and peasant pleasures, for their alteration between a cultivated artistic sensibility and a craving for the simplicities of the past. In the end, because of this oscillation of values, Fradique Mendes is a grand failure, a made-up man who fails in life primarily because of his vicissitudes. The difference is that in The Correspondence of Fradique Mendes, Eça forces us to compare this failed dreamer with an academic critic, so slavishly attracted to the "ecstasy" of Fradique Mendes' earlier poetic dabblings that he cannot see the failures of the man. Presenting his subject in metaphors even more Romantically inspired than the poet's later life, the critic of the fiction, ridiculously drops names—from Ponce de León to Mozart and Beethoven, from Voltaire to Klopstock and Immanuel Kant that reveal even-more confused notions of reality. Here's a sample:

Here I fell back, wide-eyes. Victor Hugo (everyone still remembers),
exiled at the time on Guernsey, held for us idealists and democrats
of 1867 the sublime and legendary proportions of a Saint John on
Patmos. And I drew back in protest, eyes inflamed, so much it seemed
to me beyond the realm of possibilities that a Portuguese, a Mendes,
could have held in his the august hand that had written The Legend
of the Centuries! Corresponding with Mazzini, camaraderie with
Garibaldi, that was all very well! But a sojourn on the sacred isle, to
the sound of the waves from the Channel, strolling, chatting, pondering
with the same of Les Misérables, looked to me like the impudent
exaggerations of the Azorean island who was trying to put one over on
me...

If there was ever an example of literary hero-worship, this critic has said it all. Fradique Mendes is great because he associates with the great!
At times, this comic lavishing of metaphors and comparisons wears on one—as it is meant to. And The Correspondence of Fradique Mendes is, overall, not quite the masterwork that is The City and the Mountains. But the fiction remains a wonderful send-up of Portuguese cultural pretensions, and perhaps, to a certain degree, a revelation of the cultural tensions in Eça's own life. Given the depths of his literary contributions, however, it is well worth reading through this satiric work.