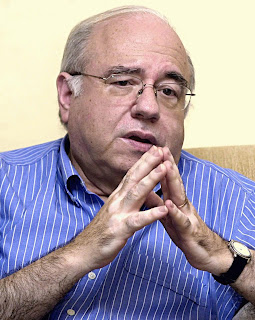 EATING ONESELF TO DEATH
by Douglas Messerli

For years several friends, all rather well-to-do, have been gathering once a month for a food club, The Beef Stew Club, at each other’s apartments. Recently—particularly with the death of club founder Ramos and the introduction of wives at these events—the group has been floundering, and several members seem disinterested in continuing their participation. These facts and others the narrator of Luis Fernando Verissimo’s novel The Club of Angels reveals to a man he accidently encounters at a wine shop. Before the meeting is over the overweight, compulsively talking Daniel invites his new friend, Lucído—who has studied cooking in Paris—to join the group, an offer the quiet Lucído refuses; he does agree, however, to cook the meal of the next occasion which is to be held at Daniel’s place.

The only thing Daniel discovers about his new friend—other than he can cook—is that he belongs to a highly secret group who dine annually in Japan on Fugu fish which, if not prepared by an expert chef who can properly remove the poisonous portions, quickly kills the diners. As the younger members learn how to properly cut the fish, volunteers selectively chosen from the members, dine on their experiments, many of them dying in the process. Lucído has survived ten such meetings and has been awarded a fish scale for his survival.

So does Verissimo introduce the major theme of the story: the extraordinary pleasure of any experience when it involves an issue of life and death. And soon after, we see that theme played out by Lucído’s exquisite meals, wherein, one by one, he cooks each of the members' favorite foods, after which that member dies. The first death, obviously, could have been an accident, but when the second fêted member dies, it is clear to the remaining Beef Stew Club members that Lucído is killing them—perhaps alphabetically—one by one. What is surprising is that, rather that ceasing their activities, the members seem even more excited about continuing their meetings, justifying it with the notion that it would be unfair to those who have gone before them. Despite the outraged protests of wives and lovers, they proceed with their dinners while trying to unlock the secret of the unassuming Lucído’s murderous acts.

Gradually, Daniel and another surviving members discover that Lucído resides in the same apartment where Ramos once lived, that, in fact, he is connected with Ramos, the only gay member of their group, a man who died of AIDS. Ultimately, they realize that Lucído and another group member, Samuel, were the young “wanton boys” of Ramos’s life, one living in Brazil, the other in Paris, and that Lucído’s acts have had little to do with them—they have been only “flies” to be squashed on the way to revenge Ramos’ death, whom Samuel has killed to save him from further suffering.

In the end only Daniel and the murderer remain, Daniel convinced that he has been allowed to live so that he can narrate the events. But when Daniel is approached by a strange man, Mr. Specter, who claims he represents a group of individuals seeking euthanasia, and—presuming the murders in The Beef Stew Club are related to such activities—wonders might his friends join. Lucído is interested in the proposition, particularly since he has yet to cook Daniel’s favorite, gigot d’agneau. And so we are left at fiction’s end with the possibility of another death or several others in the newly formed Club of Angels.

Verissimo’s short novel is at times hilariously funny and, in its recounting of the failures of the club members—once young men who had every expectation to become successes of their generation, but who all, in one way or another, failed in their aspirations—a sad story of the fragility of life, of dreams, delusions and missed opportunities for joy and love. But it is that very fragility of the tale that undermines the many directions in which Verissimo might wish to take his fiction. At once an almost metaphysical study of the relationship of pleasure and death, a darkly homosexual murder mystery, a revenge murder between the “wanton boys,” an unconventional detective story, a tale of a mysterious of union of men determined to self-destruct, a satire about euthanasia, a kind of post-modern Menippean satire centered on literature (particularly Shakespeare’s Lear) and love of food, Verissimo’s fiction simply cannot support all of its conceits. Yet one has no choice but to tip one’s hat to that grander encyclopedic work he has attempted to achieve.