the beginning of the story

I can’t recall when I first met Lydia Davis. I like to think it was with Paul Auster, to whom she was once married, but I also remember that when I once stayed overnight at Paul’s Brooklyn apartment, they had obviously already been separated and, perhaps, divorced, since I remember talking to Paul’s second wife, Siri Hustvedt, about Charles Dickens, on whom she had written her PhD dissertation—so clearly Lydia was not there!
In any event, I have known her, if nothing else indirectly, for about 28 years. I published one of her short tales, “Meat, My Husband,” in my cookbook, The Sun & Moon Guide to Eating Through Literature & Art. And I have kept vaguely in touch with her through these long years, reading most of her short collections and her longer fiction, The End of the Story, after discussing the work with Davis’ close friend, Rae Armantrout. 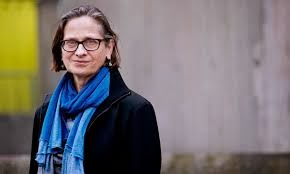 I was delighted, therefore, when my friend Deborah Meadows suggested that we attend Lydia Davis’ reading together.
I have been enchanted with Davis’ so called “mirco-fictions” for the many years that I’ve been reading her—having myself written a book also of very short fictions. Her works, which are very much about language, are, however, not as poetically self-referential as my works, but give the pretense of a narrative thrust that even Scheherazade might envy. But I rediscovered, listening to her works of the other night—stories from a new collection that she gathered under various related processes and topics: dream stories, letters of complaint, very short, almost maxim-like comedies, and, what one might describe as somewhat acerbic reactions to criticisms of her work (one hilariously describing her as a lazy author for using contractions such as “can’t and won’t”). Since she had also just spoken to a classroom of students at Cal Arts, Davis punctuated her excellent readings with statements of her own techniques and approaches, including the relationship of these very short pieces with her, often, very long translations, such as Proust’s Swann’s Way.
What I realized, however, in hearing her stories (I have no actual texts available to me, since this represents a soon-to-be-published book) is that, unlike her one longer fiction, which speaks of “ending” the tale, most of her works of fiction function more as “beginnings” with ironic closure that stories with a beginning, middle, and end. One of Davis’ remarkable eccentricities (and I say that word to suggest only its positive connotations) is that her tales are almost finished before they have begun, shutting down at the very moment when a writer of lesser talent and linguistic assuredness, might just started. And in that sense, Davis relies on the reader more than most writers to imagine and involve him or herself in the tale in order to finish it. If she were a comedian, she might write (and, at times, almost does) something like “A minister and a rabbi come into a bar...,” stopping even before the punch line, or finishing it more like the “standard” comic line: “the bartender says, what is this some kind of joke?” Davis’ works are pared down to the refined of linguistic punch-lines, so eloquently expressed (she talks about how most of her revisions are in the arrangement of the words) that we have to rethink the tale in order understand, or, put another way, we have to work our way again through her terse language in order to perceive the profoundness of her nearly deconstructed story.
When we do finally “get the message”—although there are no true messages in Davis’ work, only questions that basically remain unanswered—the superficial irony of the tale has almost been lost as we sink into the deeper meanings behind her lurch into narrative.
In the longer pieces, Davis explores the meaning of things, as in her brilliantly satiric letter of complaint to a company who has sent her a letter of award for Woman of the Year, chosen by a mysterious 10,000 judges—if only she might pay $149 for a plain letter of award or $249 for a laminated edition. Beyond that they have spelled her name wrong! The question boils down to whether she is actually stupid or purposefully deluded by the meaningless award. Bit by bit, the author explores all the logical and illogical avenues of such the absurd “logic” of such a pontification.
But throughout, Davis’ marvelous tales are not at an “end of the story,” but merely a beginning, a salvo into the dark silence of the white page. Like Beckett, Davis’ work, ultimately, is about “won’t and can’t,” shifting always into I “will,” I “must” go on. That “going on” is the marvel of her nascent creations. “Did I ever tell you,” Davis might as well begin, without entirely ever finishing what she might want to tell us. We must, in joy and delight, complete her “endings.”