Daniil Kharms | "First of All and Second of All" 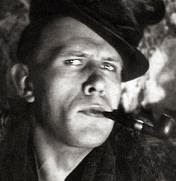 FIRST OF ALL, I was walking down the road and singing a song.

SECOND OF ALL, along came Ferdinand and said, “Wait up! I’m coming too.” And there were now two of us walking down the road and singing songs.

THIRD OF ALL, we saw a man standing in the middle of the road.

This man was just about the size of a bucket.

Ferdinand and I walked right up to him.

“Who are you supposed to be?” we said.

“Me?” said the small man. “I’m the smallest person in the world!”

The small man thought it over and said, “Okay!”

And so, we set out together, Ferdinand, me, and the small man. But the small man could hardly keep up with me and Ferdinand. He tried running, but it didn’t make any difference.

So Ferdinand and I decided to carry him.

The small man hung on, with both feet dangling in the air.

And there were now three of us walking down the road. Two of us continued singing songs. and one of us turned out to be something of a whistler.

FOURTH OF ALL, we saw a man lying on the ground with his eyes closed. This man was the longest man any of us had ever seen. Ferdinand and I and the small man approached him with caution.

All at once, the tall man jumped up on his feet, rubbed his eyes, and scratched his head.

And then he noticed us.

“Waaaait a minute!” he said suspiciously. “What’s going on here?”

We spoke loudly, so the tall man would hear us.

The tall man thought it over and said, “Okay!”

And before we could say another word, we saw him take a giant step forward.

“Hey!” the small man shouted after him. “You have to wait for us!”

Ferdinand and I grabbed the small man and ran after the tall man.

“This isn’t going to work,” we said to the tall man. “We can’t keep up with you. Why don’t you try taking baby steps.”

The tall man tried taking baby steps, but it didn’t make any difference.

“Listen, tall man,” we said at last, “can’t you just put the small man on your shoulder and carry the two of us under your arms?”

There was nothing else we could think of.

The tall man put the small man on his shoulder, tucked me and Ferdinand under his arms, like a couple of newspapers, and started walking down the road.

“Are you comfortable?” I said to Ferdinand. “I’m comfortable. How about you?”

“I’m comfortable too,” I said.

And Ferdinand and I started singing songs. The small man joined in with his whistling. And even the tall man couldn’t help humming along.

FIFTH OF ALL, we saw a donkey standing in the road.

All of us wanted to ride the donkey. But the donkey couldn’t very well carry all of us. So we agreed that each of us would give it a try.

The tall man talked us into letting him go first. He braced himself and swung one of his legs over the donkey. But the donkey didn’t even reach his knees!

“This is ridiculous,” said the small man, getting up off the ground. “The tall man should put me back on his shoulder, and you and Ferdinand should take the donkey.”

Ferdinand and I could not have agreed with him more.

The tall man put the small man on his shoulder, Ferdinand and l climbed on top of the donkey, and we were once more on our way.

Was the small man comfortable?

Was the tall man comfortable?

SIXTH OF ALL, we came to the edge of a great big lake.

Lying on the shore of the lake was...

Ferdinand and I immediately found good seats for ourselves, but getting the tall man inside the boat was not so easy. He ended up sitting with his knees pulled up under his chin.

The small man made himself at home under one of the seats.

But there was no room at all left for the donkey.

“If you want my advice,” said the small man from under his seat, “the donkey should go in the boat with us, and the tall man should walk across the lake.”

The small man’s advice satisfied everyone.

The donkey went in the boat with us, and the tall man walked across the lake, pulling the boat behind him by a rope.

The donkey sat tight, afraid to move a muscle. We couldn’t tell what it was thinking, but it did not look happy.

As for the rest of us, we had no problem with being in a boat. And the tall man—he didn’t mind getting a little wet. We crossed the lake with the wind blowing in our faces, singing songs at the top of our lungs.

SEVENTH OF ALL, we reached the other side of the lake and got out of the boat.

Waiting for us on the shore, by the very edge of the water, was a car.

“What is this thing?” said the tall man.

“Beats me,” said the small man, scratching his head.

It was Ferdinand’s turn to say something.

“Well?” said Ferdinand. “What are we waiting for?”

Ferdinand and I took the front seat, and put the small man on top of the side-view mirror. That took care of Ferdinand, me, and the small man. But we had no idea how to get the tall man, the donkey, and the boat inside the car.

We tried putting the boat in first, and then putting the donkey inside the boat. That almost worked, except now the tall man had nowhere to sit

We tried putting the donkey and the tall man in first, but then there was no room for the boat.

We didn’t know what to do next.

Just then, the small man made a suggestion.

“Suppose the tall man gets inside the car, puts the donkey on his lap, and holds the boat in his hands?”

The small man’s suggestion satisfied everyone.

The tall man squeezed into the back seat, put the donkey on his lap, picked up the boat, and raised it high in the air.

“Is it too heavy?” asked the small man.

“Not at all,” the tall man assured him. “It’s lighter than it looks.”

I stepped on the gas, and we took off. Everyone was comfortable, except for the small man, who kept wibble-wobbling on top of the side-view mirror.

Otherwise, no one had any complaints. We zipped along, singing, humming, and whistling.

EIGHTH OF ALL, we arrived in a city.

The road turned into a street. Which was filled with people. All of whom were staring at us.

“Look at that big one in the back seat!” they were saying to one another. “He never goes anywhere without his boat and his donkey! Ha ha ha! And how about that little one on the side-view mirror—the one wibble-wobbling all over the place? Hee hee hee!”

We drove right up to the inn, put the boat on the ground, parked the car in the garage, tied the donkey to a tree, and called the innkeeper.

The innkeeper came out and said, “What can I do for you?”

“Would it be possible to spend a night here?” we asked politely.

“By all means,” said the innkeeper.

He showed us to a room with four beds.

Ferdinand and I got into bed right away, but the tall man and the small man couldn’t figure out a way to lie down.

The tall man couldn’t figure out a way to lie down because all the beds were too short for him.

The small man couldn’t figure out a way to lie down because all the pillows were too big for him. What are you supposed to do with a pillow that’s bigger than you are?

But since everyone was very tired, we all went to sleep somehow. The tall man wound up sleeping on the floor. And the small man announced that he didn’t need his pillow, and promptly fell asleep on top of it.

NINTH OF ALL, we woke up in the morning and decided to keep going.

Right then the small man said, “You know what? Enough already with that boat and that car! Why don’t we just walk.”

“No,” said the tall man, shaking his head. “I won’t make it very far if we walk. It’s not so easy, for someone like me.”

“For someone like you?” he said to the tall man. “Give me a break!”

“But it’s true!” protested the tall man. “If I could only find some kind of horse for myself.”

“What are you talking about—‘a horse’?” said Ferdinand. “You don’t need a horse. You need an elephant!”

“And you’re not going to find any elephants here,” I added. “This isn’t India.”

Just as these words came out of my mouth, there was a lot of noise, barking, and shouting outside. We looked out the window and saw an elephant.

It was being led down the street by a large, noisy crowd. The barking was coming from a little dog who was running next to the elephant.

Meanwhile, the elephant kept on walking down the street, without paying any attention to anyone.

“Here comes your elephant now,” said the small man to the tall man.

“And you,” said the tall man, “can go on top of that little dog. It’s just the right size for you.”

TENTH OF ALL, the tall man, the small man, Ferdinand, and I ran out of the inn.

Ferdinand and I climbed on top of the donkey.

The tall man ran off after the elephant.

And the small man stood in front of the inn, and waited.

When the tall man caught up with the elephant, he jumped on top of it and turned it around. The elephant started walking toward the inn.

And do you know who was running next to the elephant?

Who else but the little dog!

Barking more than ever, the little dog was heading straight for the inn, where the small man was waiting for it.

As soon as it reached the inn, the small man took a deep breath and jumped on top of the little dog.

And we were on our way.

The tall man on top of the elephant.

Ferdinand and I on top of the donkey.

And the small man on top of the little dog.

It was a sight that no one will forget!

We rode out of the city, wondering what other adventures were waiting for us down the road.