voice and mind
by Douglas Messerli

Thomas Frick’s 2011 fiction, The Iron Boys, is full of rich characterizations and is densely plotted. By the book’s completion, the reader has a strong sense of the early 19th century northern English communities, in which many individuals were involved in the Luddite Movement, destroying machines and mills in strong reaction against the industrial machines newly installed. Not only were these individuals angered by the incessant noise of the new mills, run, in Frick’s fiction, by George Cogent Meadows Richard Pilfer Withy, but were disturbed by the economic shift from hand labor to machines, forcing some of them out of jobs and fair payment. The central characters of this book gather on street corners, in pubs, and in each other’s homes, or take long walks together, permitting the author to present us with dialogues between all sorts of beings, from radical agitators like Pank, hard-working women such as Rose Stonewarden and Sarah Maldon, and poor and wandering, poverty-stricken children such as Milky, to homosexual intellects like Eddard Weedy, lovers such as Silvy, and brutal drunkards, one of whom—in the most vicious act of the book—kills and eats a puppy. The world Frick paints is nearly Dickensian in its depiction of people of enormous appetites and hard living. 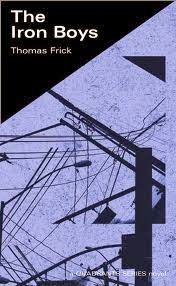 Yet for all its density of good, old-fashioned story-telling, the brilliance of The Iron Boys lies not in its secondary characters or plot, but in its focus on the voice of its narrator, Corbel Penner, an intelligent but uneducated local, who tangentially gets involved in a violent attack on Withy’s lace-making mill. And concentrating on Penner, Frick’s story, following the free-associations of the character’s thinking and his personal language, turns what may at first seem like straight-forward realism into a fairly radical and highly poetic text. While Frick gives us a good story that will end, we know from the beginning, in a highly dramatic attack and destruction of the mill, crippling our hero, what really matters in this book is the sound and movement of that figure’s voice and mind.
How Frick—who was born and raised in Kentucky and Arkansas, before living in England, Michigan, New York City, Boston, Strasbourg, and, for the past several years, in Los Angeles—was so able to create a credible North England dialect for his character is unimaginable. But then perhaps this character’s voice, in its open eccentricity, is nothing like what it pretends to be. Who cares, when a fictional figure can speak so wondrously?

Hangin over that year is the comet. Cant never forget
that. It first appear in that cold spring. Biggest comet
ever seen Weedy says. That should tell you something.
Aint but a smudge in the sky at first. I make nothing of
It but I don’t see so good. Theys some talk in the square.
Misfigewsured lambs an blight in the comin crop. Bad twins.
The fortunes a Napoleon. One crystal night seem all close
at once. I can see a blood red tail brushed out like feather
malt. Wide an tall an just that spiky. Weedy says it were
a Frenchman spot it first. Out a their froggy pride they
drum up all the virtues a their comet wine.... What we did
have that autumn is the fattest sweetest penny lucre melon
you ever taste.

If, at first, this language seems a bit too close to a work in dialect, the reader soon comprehends this as a masterly made-up language that reads throughout more like a poem. And along with the meandering mind of our hero which determines the various directions the tale takes, the fiction becomes something closer to being a long narrative poem. Even though the Burning Books format is small, and the work is only about 260 pages, it took me longer to read, at times, than the momentous novel I was encountering during the same period, Remembrance of Things Past by Proust.
Consequently, Frick’s central figure, although he may be a kind of everyday man, is transformed into something very extraordinary, beginning the book by being able to comprehend the language of the birds, and ending up with a kind Homeric nobility in his late discovery that the boy from Child Town whom he has so long admired, is his own son, the mother his former lover. And like Homer’s heroes, throughout Penner sings—such as the song sung about the mentally retarded local, New Billy:

O New Billy my charm a New Billy
When shall I see my New Billy again
When the fishes fly over the fountain
Then I shall see my New Billy again
When your fishes fly over the fountain
Then you shall see your New Billy again.
Penner also has a sense of moral being that far outweighs most of the other figures in his world, growing disgusted with himself and others in the bar where, as drunk skins and eats a puppy, he and others sit passively watching. The result of that outrage ends in him murdering the drunk soon after, which, obviously, represents his personal fall from grace. If the book begin with his being one with nature, as opposed to the mechanical world created by Withy and other capitalists, his and the Luddites’ actions to do not result in any real change, as Withy simple builds a new and grander factory. Having lost the use of his legs, Penner himself is forced to rely on a kind a machine, a cart-like contraption fixed up for him so that he can travel about.
If by novel’s end, the birds no longer can be comprehended or, as Penner suggests, no longer even sing, however, the human voice of Frick’s picaresque has sung such a memorable song that you may be tempted to wander its pages all over again.