Argentinian writer César Aira’s The Literary Conference is a tale about writing, about the forms a writer uses and the way he borrows from the world around him in order to create. And in that sense this short fiction is also a vast metaphor for the process that Aira himself employs in order to create the more than sixty books he has published over the past decades. 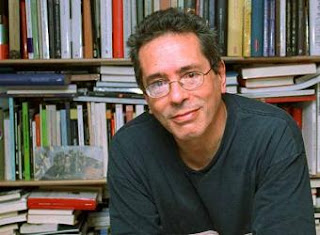 On the surface, at least, Aira’s work is a literary disaster: in a mish-mash of genres including the book’s early adventure, rags-to-riches tale, and legend of the “The Marcuto Line”—a vast cable that inexplicably connects to a pirate treasure buried deep in the ocean, Aira spins an out-of-control tale of pop-fiction with postmodern literary aspirations.
Seemingly by accident, the “hero” of our tale, also named César, discovers the secret of the “line,” retrieving the treasure and reaping a huge fortune. Although he promises to reveal how he had accomplished later in his story, he never does so—at least in any direct method of story-telling. The remainder of the tale blends science fiction, a kind of vampire story, a thoroughly hackneyed piece of drama, and a satire on the literary establishment, while employing the narrative jumps, leaps of logic, and sometimes absurdly romanticized language of South American television soap operas. In short, The Literary Conference, as the author admits, has little coherence, moving forward at breakneck pace with little logic of plot or character. Figures—such as César’s former lover, Amelina—are mentioned, dropped, and reappear briefly again before disappearing totally from the narrative. The great Mexican writer Carlos Fuentes—whom our now wealthy hero hopes to clone in order to create an army of literary thinkers through which he can control the world—makes only a brief appearance, speaking words of congratulations to César that even he does appear to hear or recall:

The hall had a bad echo. Everybody was shouting and nobody could
hear anybody else. I accepted the congratulations with the gracious-
ness of a perfect idiot. I watched lips move and smiles appear,
sometimes I moved my lips, too, and drank, and smiled again; my
face was hurting from holding that grimace for so long. That was
even how I received Carlos Fuentes’s words.

The only time Fuentes again appears is as a blur in the back of his Mercedes Benz as he rushes to the airport to escape the Venezuelan city of Mérida where the conference has been held.
The only character who is given any dimension, is a beautiful young scholar Nelly, a friend of Amelina, who dances with our aging hero for a night and helps him save the city from a force of gigantic blue worms through a coup de théâtre worthy of comic-book storytelling. It seems that César’s plot to steal, through a tiny wasp-like drone, a pinch of Fuentes’s DNA has gone awry, scooping up instead a miniscule dot of the author’s bright-blue tie, which the cloning machine has reproduced into the endless army of silk worms (worms literally made of silk). Instead of obtaining world domination, César saves the day by positing a huge exoscope (inexplicably a prop in his play performed at the conference) between the worms and the sun in order to burn his own creation, as if burning his own book.
The clue to this concatenation of literary methodologies—precisely the kinds subjects that are at the heart of most academic literary conferences—is what the author admits in the mid-point of his book: he is a kind of literary vampire:

Vampirism is the key to my relationships with others, the only
mechanism that allows me to interact. Of course, this is a metaphor.
Vampires, as such, do not exist, they are merely a hook on which to
hang all manner of shameful parasitism that need metaphor to come
to terms with themselves. The shape that metaphor takes in me is
special, as I said. What I need—which I suck from the other—is
neither money, nor security, nor admiration, nor, in professional
terms, subject matter or stories. It is style.


By style, Avila clearly does not me their linguistic style, but rather the essence of his victiom’s being, the thing that makes each of us special. The writer, at least this writer so he claims sucks that “essence” from each figure he meets before his “victim” dries up, wilts and becomes vacant, whereupon he moves on the next individual and the next.
Of course, since he is speaking of style and metaphor, so too does César derive his plots and characters in this fiction from others, creating a cacophony of only slightly interconnected texts that openly reveal his desperate need—any fiction writer’s need—to keep moving forward as his thoughts rush on and on through his creation, without turning back.
Aira, in other words, uses a mad appropriation of nearly discontinuous narrative to reveal both how a fiction writer creates and the dangers that lie within such an unreflective mode. In a sense, he has put his own fiction into a kind of bi-polar state of mind, with dramatic highs and depths of mediocrity (such as his self-admittedly dramatic farce concerning a three-way affair between Adam and Eve) which stand in as metaphors of the process of fiction writing.
As Aira portrays himself and others like him such as Fuentes—who in some of his own works has combined politics, science fiction, surrealist passages and other genres—the very thing which often delights readers sometimes empties the world for its creator, who, a bit like an ouroboros, eats away his own existence in attending to his tale. Fiction, for Aira, appears to be an appropriation of life itself which can bring real life into focus or send it off into frightening fantasy which threatens our actual existence. His The Literary Conference does both, sometimes in the very same instant.