even the heart rebels
by Douglas Messerli


Somewhat inexplicably, after finishing my essay above on The Hustler by John Henry Mackay, I was immediately reminded of a book I had never before read, John Rechy’s City of Night. As I mention in my brief afterword to this, I had several reasons perhaps for never reading the 1963 fiction until now. And it was clear that 2015 was an appropriate year in which to finally attend to that work, given my connecting topic and the concerns with life in Southern California, issues to which this work, I presumed, might attend. 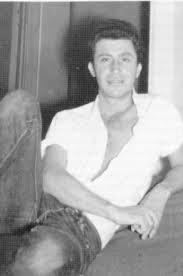 Indeed, City of Night is very much about identities separate from those of the majority of society, and it does reveal a world that, until its publication, was basically unknown to everyday readers. What I was not prepared for, however, is just how remarkably written this book is and, although it certainly presents events of the underbelly of ordinary sexual behavior, that it is not really at all a book about sex. While the “hero” dives in and out of beds and other sexual locations with the regularity of an overweight adolescent munching on a bag potato chips, Rechy’s work, nonetheless, only rarely portrays the actual sexual act, and when it does so, it is with such a polite abstraction that would probably not even bring a blush to the cheek of a maiden librarian. Here’s a scene from our unnamed hustler’s sexual encounter with an endlessly speaking “professor,” who obviously ends his verbal encounters with an oral encounter of another kind:

He snuffed out the cigarette he had been smoking, looked
through the box by the bed, found the lavender one. Held it
up toward me. “Now comes the time for the lavender,” he said.
He lit it, inhaled it deeply, this time, placed it on the ashtray;
said: “Now, Angel, come here, stand near me—but first,
lower the bed for Tante Goulu please.


Thats it. Now come closer, you see I have great difficulty moving.


There, thats nice, thats fine—stand a little this way—that's--
just—fine.
Youre a good boy, an angel….”
When he had finished, he leaned back on the bed.

In numerous other situations, such as his encounters with “Mister King,” who wants only to be seen with the hustler, who he dresses up in leather, no sex is even involved. And in the hustlers’ attempts to pretend that their gay sexuality is simply a way of making a living and not the sexual reality of their own lives, sex between one another is generally forbidden, as the central figure purposefully ignores the touch of the hustler Pete who is determined to stay, one night, in the hero’s flat:


The lights are out now. The darkness seems very real,
like a third person waiting. I lay on the very edge of the
one side of the bed, and he lay on the very edge of the
others. A long time passed. Hours.
“Are you asleep” he asked me.
“No—I can’t sleep.”
“Me neither,” he says. “Maybe I should go.” But he
didnt move.
More silence.
And then I felt his hand, lightly, on mine.
Neither of us moved. Moments passed like that.
And now his hand closes over mine, tightly.
And that was all that happened.


In short, the well-read and quite intelligent figure who tells the tales of City of Night is not as interested in the actual sexual activities in which he is almost endlessly engaged as he is in searching for the reasons for why he is so driven to seek out those brief and almost meaningless interchanges
Indeed the real “focus” of this hero’s travels from New York to Los Angeles, Los Angeles to San Francisco and back, from San Francisco again to Chicago and New Orleans, is not is not upon flesh or even the often disinhibited bodies of those he meets, but is their words and actions in the bars, plazas, and streets outside of the shabby rooms where they have sex and sleep. Rechy’s hero in portrayed as a rather laconic being, instead of playing the loquacious confabulator of someone like Djuna Barnes’ Dr. O’Connor in her gay underworld fiction Nightwood (he purposely plays dumb, learning early on that his clients don’t want to bed somewhat who has read books and might know more than they do), letting his own characters speak exuberantly for themselves, City of Night, like Nightwood, nonetheless, is a Menippean satire or anatomy like Petronius’ Satyricon, which usually features a pedant.
Like the other works of that genre, Rechy’s fiction takes us from party to party with a large range of sexual types who represent various social classes of American society. Rechy’s book is structures around these speaking figures (very much like Barnes’ living statues), each of their sections named after the figures, alternating with briefer sections titled “City of Night,” which sets the next location and place of action through which the nameless hero meanders in time and space.
The figures of City of Night—the already mentioned seasoned New York “youngman” (Rechy’s word for hustler) Peter; the absurdly overweight, bed-bound pedant “The Professor”; the determined-to-marry drag queen, Miss Destiny; the now devastated, formerly “beautiful” hustler, Skipper, who carries his youthful photographs with him wherever he goes; the still-larger-than-life, handsomely-chiseled would-be movie-star Lance O’Hara and the elderly gay Esmeralda Drake III from whom O’Hara swindles a grand Hollywood house; the crew-cut-topped, good looking married man attracted to the hero but unable to abide the “fairies”; the S&M, Nazi-supporting, leather-dressed Neil, with a closet of costumes through which he hopes to help his devotees discover their true violent selves; the tough gay bar owner, Sylvia, who lovingly protects her clientele out of guilt for how she has treated her son upon his revelation of his gay sexuality; the tall, heavily muscled drag queen Chi-Chi posed against the wall in order to call out to all the New Orleans Mardi Gras celebrants; the dying transgender beauty, Kathy; and, finally, our hero-hustler’s would-be savior, Jeremy, of the white sheets, who begs the narrator to stay just a little longer while he skillfully enters a dialogue that might just awaken the narrator to his self-destructive addiction to loveless love—each speaks his piece, behaving as bizarrely as do all human beings on the prowl for love, self-respect, and meaning in their lives.
And yes, we do laugh at the outsider outrageousness of Rechy’s types—at the very same moment that we, through Rechy’s non-judgmental and fair-minded depiction of them, come to admire and feel for them as individuals. Who might have imagined that a fiction about the illicit gay underworld—and, it is important remember, that during the time of this work, all the actions of the characters are not only against the law but often resulted in their arrestment—might bring the reader, at least this reader, to tears over and over again.
Finally, one wonders why this considerably intelligent work, although quite popular in its time, was never completely respected by Rechy’s readers or fellow writers, or why, perhaps, the author himself was not more lionized. This work is most certainly way ahead of its time with regard to its liberated and liberating attitudes toward the gay, lesbian, and even transgender communities. And Rechy’s detailed portraits of gay environs such as Times Square in New York, the New Orleans French Quarter, and Los Angeles’ Pershing Square and its bars, along with the streets of Hollywood Boulevard depict a series of lost worlds being destroyed at the very moment in which Rechy was recording them.


One might theorize that some of the distance that both the gay and literary communities have kept from this near masterpiece has to do with the author himself, who like his narrator, was so addicted to his lifestyle that even after becoming a university teacher of writing still moon-lighted as a hustler, his students sometimes discovering him near local cruising areas shirtless in dungarees. Rechy himself, although for years now in a long-term gay relationship, admits to hustling even into his 70s.
One of the most repeated of motifs is how the hustlers perceive their own desirability, the fact that they are paid to have sex, as representative of their beauty and youth, in opposition to the reality of death. This book makes it clear that the author, although so wise in his perceptions of that world, could never himself quite escape that need to be wanted for his youthful looks. Obviously—and it does in fact became more and more obvious as the story continues—both the author’s and his hero’s addictions have more to do with deeply ingrained psychological issues than with authorial logic. Even after a long dialogic encounter with the man who wishes to save him, ending in the stranger’s insightful statements:


There isnt any difference, really, between the hunter and
the hunted. The hunted makes himself available—usually
passively, but available nonetheless. Thats his way of
hunting…. I’m sorry,” he said, relenting, “I just wanted
to see you defend the very innocence youve probably set
out to violate…You see,” he said, again smiling so that I
cant tell how serious he is,” “even the heart rebels—finally
against its own anarchy. And that’s the most powerful
rebellion.—

even then the hero returns to the fray, joining the Mardi Gras celebrations, drinking, doping, sucking, and fucking until he and those around him collapse, becoming the ghosts of which they are in terror. If the fiction seems to end with the possibility of a transformation, as the hero returns, if only briefly, to his native El Paso, the life of the author went on as if nothing in this profound work had truly meant anything, the reality suggesting that nothing had truly changed from what the narrator says in the first paragraph of City of Night:


Later I would think of America as one vast City of Night
stretching greedily from Times Square to Hollywood Boulevard—
jukebox-winking, rock-n-roll-moaning: America at night
fusing its darkcities into the unmistakable shape of loneliness.