As I’ve noted elsewhere in the My Year volumes, I have known John Perreault and his husband Jeff Weinstein for decades, so it was a shock when I read in September of this year that John had died on the 6th of that month, at the age of 78, from complications of gastrointestinal surgery.
I believe I first encountered John in the pages of art journals, in particular Artnews in the mid-1960s; a few years later, I also begin reading some of his poetry.
In 1966 John was hired as the chief art critic for one of the most influential of New York newspapers of the day, The Village Voice, a paper where later his companion, Weinstein, was food critic.
John championed, over the years a great many artists emerging against the abstractionist art that had previously dominated the New York art world; he wrote about the minimalists, but also about photorealist artists, land art, feminist art, and the decorative art shown at that time primarily by one my personal favorite galleries of the period, Holly Solomon Gallery. Over the years, Solomon became an enjoyable acquaintance of mine and my companion Howard Fox.
John was a personable and involved critic, and quickly became friends with some of the artists he reviewed, becoming the subject of paintings by Philip Pearlstein, Sylvia Sleigh, and Alice Neel and of photographs by Eleanor Antin and others. Weinstein reports that John spoke with Andy Warhol nightly via phone calls. John had a laconic way of speaking that made one feel it was truly listening to what you had to say.
As an outspoken gay man, John also was a force in drawing attention to the impact of AIDS on art, helping to organize the “Day Without Art” activities of 1989. I recall visiting with John and Jeff, one evening, a major historian of the gay movement, resulting in a long discussion of the past of future plans for gay activist actions, which I saw then as almost an analysis of where we’d been and where, as gays, we had to move.
Over the years, John taught at the New School, the School of Visual Arts in Manhattan, the State University of New York at Binghamton, and the University of California, San Diego, where he met Weinstein.
In later years John served as a curator at the American Craft Museums, the Everson Museum of Art, and the Newhouse Center for Contemporary Art.
In the 1980s, John and Jeff begin to publish a small magazine, Only Prose, devoted to fiction, publishing some of my own work in its pages, while I, in turn, published Weinstein’s wonderful story “A Jean-Marie Cookbook” in my Sun & Moon journal, in 1979, anthologizing that tale in my fiction collection Contemporary American Fiction, and publishing a somewhat longer fiction Life in San Diego, as well as a selection of Jeff’s restaurant reviews in Learning to Eat in 1988.
The next year I published a remarkable collection of John’s tales, Hotel Death and Other Tales, which I’ve chosen to comment on below in memorium of Perreault.
During the past few years before his death, John returned to writing poetry, and I published two of those new poems in my Little Anthology of My Favorite American Poets of 2016.

Although I have now read Perreault’s collection of tales, Hotel Death, at least three times, I never perceived until this year’s re-reading how much his stories were concerned with the two unifying themes of My Year 2015 and ‘16, identity and belief. Indeed, in story after story, Perreault’s nervous characters—most of them gay men, some still within heterosexual marriages—are seeking to find out who they might really be, particularly since so many aspects of their identities have been defined by others. 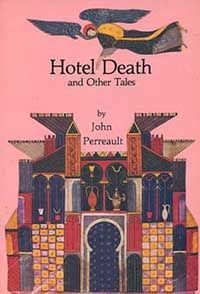 In the title story, “Hotel Death,” a science teacher (astrophysics) seeks to escape his not so fulfilling work by traveling into the Baja Peninsula to visit a tourist hotel, Hotel Descansado. Although the hotel is comfortable and modern—with large rooms whose balconies face a pool and the ocean—and spacious public spaces, strange things seem be happening around the corners and behind his back, with waiters ironically smirking and winking, one seeming desperate to have sex with him. He has taken pictures during his travel to the hotel and his return, but none of the photographs of the hotel itself turn out. The swimming pool, strangely enough shaped as a question mark, is a stagnant body of green water, and although the ocean beacons nearby, a wall stands between the hotel and the beach full of sand dollars. When he does climb the wall to take a nude stroll in the sand, he is met by banditos who demand money, although, as it points out, he has no place to even carry it, and, moreover, he is surviving on a credit card back in his room. One morning he awakens to discover a body in the stagnant pool. In short, while he has no specific evidence, he feels that the place is somehow evil, that even the spacious rooms are somehow akilter. It is a place, he observes, where one sees God or, to express it another way, the visitor encounters death, perhaps even his own.
Nothing does truly happen to the traveler, but he is still terribly affected by the place months after his return when he attempts to explain what happened there to his ex-wife and friends. It is, as he attempts to explain, as he himself had created to hotel and was responsible for the evil therein, expressing what might almost be described as a mantra of the author: “Within this nature we correct ourselves.”
The world around us, throughout Perreault’s ordinary yet fantastic tales, reshapes us and re- defines us. As in “The Previous Tenant” and “Mysteries” rooms and their previous tenants make the characters not only wonder about their lives and beliefs, but gradually works to redefine and reshape them. The philosopher-teacher, ensconced in another professors office, in “Mysteries” gradually begins to read the former tenant’s works and wonder about how his mind functioned; the bedroom he has rented, where the renter’s son had previously slept, leads the older man to speculate on the life of the young boy, whose porn and leftover jock-strap  somewhat titillates the older man. Ultimately leaves in both the office and the boy’s room a strange emblem of masking tape upon the wall which reads a bit like a x’d out cross—perhaps a kind of talisman to protect him from their forces.
In the wonderful tale “The Catalogue,” a lonely woman finds her identity in the regular mail order catalogues she receives, from which she orders all the furniture and accessories of her isolated Iowa home until she has “erased desire.”
The young would-be Beats living in a San Francisco group house, begin to play games with language that fill up and redefine their lives, while frightening those who do not know that they are “IT,” around whom the others are playing the game.


In “The Typist,” a man whose lover is away, attempts but fails to type him a letter breaking up their relationship, since his entire seems to have been redefined by his companion’s super-orderly patterns of living. Attempting to create subtle signs of rebellion—turning the top sheet in the wrong direction, leaving the electric typewriter on, unfolding the neatly organized socks, etc. But so used has he become to the way his mate has structured his life, he suddenly returns everything to its proper order before his lover’s return.
In “Airport Music” a slightly paranoid man is so terrified of the times that he determines to take on the identity of a regular businessman traveling by air; but to protect himself he determines to visit only airports in which the arriving planes are connected to chutes, spending his entire life in traveling internally from airport to airport without leaving the safety of their confines. He buys new clothes in airport shops and bathes in airport showers and in one hotel connected by enclosed pathway to the airport. When, by accident, one of his flights is rerouted to a small airport at Ft. Myers, and he is forced to briefly deplane outside, he is shot dead by unknown assailants; clearly his paranoia has been valid.
Often, as in the tale “Do Not Drive in Breakdown Lane,” the narrator or storyteller so loses his selfhood, that, in the end, identity is completely lost no matter how the story is told:

Change all the genders; change all the names, persons, tenses.
Whose story is this, anyway? Does it matter? Whose house
is this, anyway? William’s, Dawn’s, Eve’s, mine, or yours?
I am a woman and I arrive in Provincetown in the dead of
Winter to take care of a house and a dog, but the doge is gone.
And, believe it or not, I find love. It goes on and on; it goes
Around and around; in a spiral, this story-telling.

Time and again in Perreault’s world, figures, while driven by inner desires, are also redirected and redefined by others, their identities stolen or, and the very least, redefined. Often, it is their inner desires which actually remake their identities. Identity, in short, is a malleable thing for Perreault—unlike the view of Gertrude Stein for whom identity is merely repetition—so fragile that even the slightest outside intrusion can destroy all self. Is it any wonder in the terrifying story “The Door,” a man lays inside his apartment horrified by the possibility of someone intruding upon him, whether it be with the intent of selling, proselytizing, burglary, or, perhaps, even murder!