The year is 1939, when a young boy, Tommy McAllister is 9 years of age. His family and all their friends seem to have escaped the effects of the Great Depression, while living in almost Belle Époque splendor they shuttle back and forth in what appears to be a Michigan upper peninsula city and between what they describe as “The Island.” Reviewing the book in 1984, upon its original publication, Russell Banks described the location to be Wisconsin, but I prefer to think it as Michigan since the book’s author, William McPherson grew up there—the son of the director of Union Carbide operations in Sault Sainte Maire—and, while the events of the fiction, are not necessarily autobiographical, they are specific enough that we recognize there are certainly personal elements at work in this story.
In the large rambling house where Tommy and his family live, he is the adored youngster, particularly by his devoted mother, whose other two sons, David and John are at college and working, no longer living at home. It appears that the McAllister’s are the social center of their set, made up of other well-to-couples, and elderly rich women such as Mrs. Steer, Mrs. Appleton, the outlandish Mrs. Slade and others of their ilk. The group also includes the handsome bachelor, Lucien Wolfe, who has mines in Canada and Mexico, the later to which he retreats for long periods of time. But if the reader is expecting a satiric vision of the Midwest somewhat like Sinclair Lewis’ or even Evan Connell’s Mr. and Mrs. Bridge duo, she will be highly disappointed. 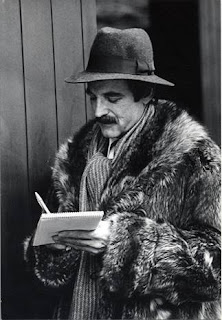 McPherson’s tale is told almost entirely through Tommy’s eyes and through the fairly non-judgmental thinking of a child simply attempting to assimilate and comprehend the adult world going on around him. Because he is so young in a world of more elderly people, Tommy is both spoiled and permitted things that his brothers and their girlfriends might never have been allowed, and, thus, he becomes a kind of innocent “witness” to this world in a way no others can be. Indeed, we see hardly anyone of his age, only a couple of cousins of friends of the family; and the only child he actually encounters is a school friend, who mocks him for being a “mamma’s boy.”
The society in which he finds himself is a highly polite one, celebrating at one another’s houses with great regularity and splendor, while refusing to speak at length of family deaths, of the few tragedies they encounter (such the furnace explosion in his father’s plant), or about their own private misbehavior (although occasionally gossiping about it). These polite White Anglo-Saxons, although depending on blacks and local Indians for serving, cooking, and cleaning, would never dare even mention their race or social standing. The beautiful young golf-playing Daisy (a character who reminds us of how close McPherson’s fiction is Fitzgerald’s—also a Midwesterner—The Great Gatsby), and to whom young Tommy is attracted, has married a Jew, even though she continues to attend the communities’ preferred Episcopal Church.
In short Tommy’s world is one very closed-off. Although he spends long hours with the Country Club’s Buck, its black cook Ophelia, and the Native Americans who ferry him back and forth from the mainland to the Island, his “peers,” so to speak, represent a codified society that is difficult to comprehend by anyone outside its self-built walls, a world which, given our current political situations, reads quite differently (in the reprinted 2013 edition) from what it originally did.
McPherson treats Tommy in this deep narrative a bit like British writer Ivy Compton-Burnett’s children, as a highly intelligent and completely well-spoken little adults. Only Tommy has not quite figured out what he is witnessing and what to make of it all. During the one highly-eventful year that this work traces, Tommy straightforwardly asks questions of adults who do not always want to answer his inquiries. If they are generally polite and friendly, they also steer him away from certain issues, such as what adultery—a word he has obviously overheard—might mean; or why do his parents, who seem so much in love with one another, and whose glorious 25 (silver) anniversary party the novel celebrates near its end—occasionally argue and, at times, seem to move off from one another? And why does his usually open and honest mother suddenly one day tell him that she is 22 years of age—a fib he has utterly believed, and is later mocked when he shares it with his brother? In little ways and sometimes larger ones, Tommy begins to feel slightly betrayed.
The most shocking thing he discovers, which he cannot truly explain to himself, is when he hides under the dinner table during an evening dinner party, observing Mr. Wolfe rubbing his mother’s foot. Of course, we know what’s going on, but Tommy, unable to realize its full significance, is confused, even if he senses its significance. Inexplicable, at least to himself, he later steals and hides a letter Wolfe has sent to his mother. But this very scene, and Tommy’s later guilt for his actions, explains why McPherson’s work is so powerful. The author does not sentimentalize his young hero because, even though, like most children, he does not yet recognize consequences, he is not truly innocent. Like all children, Tommy realizes his own possible wickedness, as the formerly happy boy begins to test his mother and his limits, giving Mr. Wolfe a gift of a live snake, and refusing to be punished for the act.
Despite the social niceties of this adult world, Tommy observes their petty gossiping, asides about the self-proclaimed “wicked” Mrs. Slade, and a racial incident when the drunken Mr. Hutchens demands from Ophelia another drink; when she suggests a cup of coffee instead, he shouts “Nigger bitch.” Tommy, we perceive will grow up, as he does in McPherson’s second fiction, To the Sargasso Sea, to be a principled person; the next day he brings, as a gift to Ophelia, one of a his favorite objects, a kaleidoscope, a symbol obviously of his sorrow for the racial epithet she has had to endure.
Even more significant, I believe, is the fact his mother’s adulterous behavior, as Russell Banks has noted, “comes to nothing.” In this world, no one actually suffers for their actions; the society is too polite and refined to do anything but to gossip behind closed doors.
But, of course, this will be the last summer of their existence, and the destruction of their world will be furious and swift. Already in the book’s very last scenes, figures such as the curious and loving Mrs. Steers is focused on her radio set, its broadcasts hinting at the outbreak of World War II. Both Tommy’s brothers will soon be swept up into the War, and families living in enclaves such as those in Grande Rivière will have their seemingly never-ending patterns of parties and social isolation swept away.
The young boy of McPherson’s tightly-knit realist fiction, is already testing the current that he will soon have to face, a world that no longer can afford its isolationist attitudes, but must endure the great rapids facing it ahead.